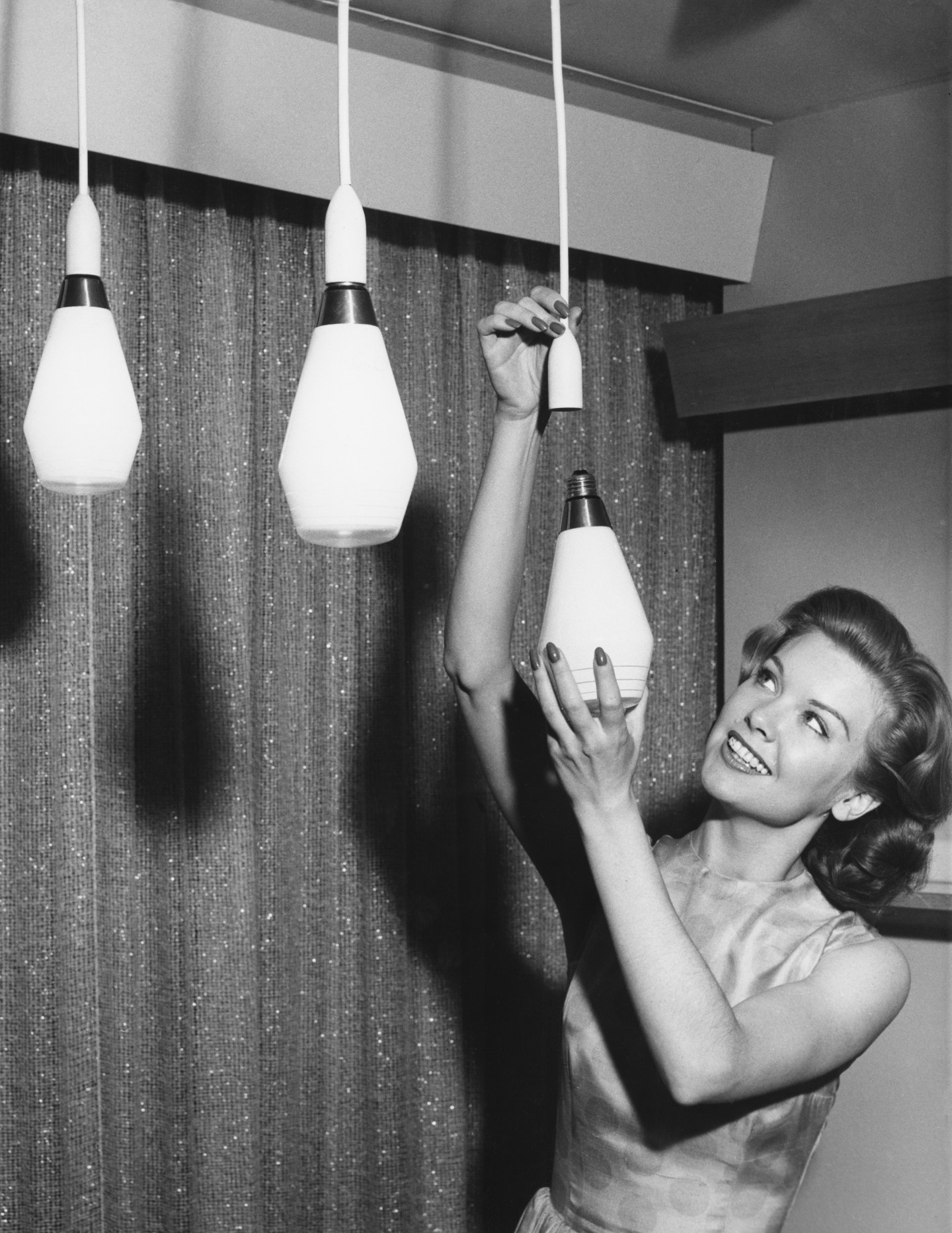 A young woman fitting the latest in light bulbs from General Electric, the 'Celeste', circa 1955. (Photo by Pictorial Parade/Hulton Archive/Getty Images)

The Nobel Prize in Physics just awarded to Isamu Akasaki, Hiroshi Amano, and Shuji Nakamura for their work on blue light emitting diodes—LEDs—reveals the extent to which lighting technology has changed over the just the last four decades. Since the energy crises of the 1970s, researchers have introduced many more efficient light sources, but now all are being replaced thanks in large part to the work of these new Nobel Laureates.

The pace at which LEDs have come to dominate the market surprised people inside and outside the lighting profession. When we at the Smithsonian’s National Museum of American History revamped our Lighting A Revolution exhibition in 2000, we left out LEDs because we lacked gallery space and items to display. Little did we realize that most lighting technologies we explored in that exhibition, like tungsten halogen and compact fluorescent lamps, were about to become obsolete.

Only a century ago, people accustomed to trimming candles, cleaning kerosene lamps, and smelling the odor of gas jets gazed in awe at the steady glow of incandescent lamps developed by Thomas Edison and his contemporaries in the 1880s and 90s. By the 1930s industrialized nations were awash in light. As one illumination engineer later noted, incandescent lamps were the perfect light source, except for one little problem: poor energy efficiency.

The search for improved energy efficiency has influenced the story of every lighting development since — discharge lighting that used an enclosed gas or vaporized metal to produce usable amounts of light, fluorescent tubes, compact fluorescent lamps.

Americans have been slow to replace their incandescent bulbs. There seemed little alternative for small, energy-efficient lamps until the Nobel Laureates’ breakthroughs in LEDs.

Historians are still sorting out exactly who contributed what and when, but the published literature shows that in 1962, Robert Rediker at the Massachusetts Institute of Technology demonstrated LEDs that glowed in the infrared range, and Nick Holonyak at General Electric (“GE”) demonstrated red LEDs. Over the following 30 years, LEDs found a niche market as indicator lamps on circuit boards and for displays on digital clocks.

Creating white light from LEDs remained a problem because it required a combination of red, green, and blue. And no one was able to create the first bright blue LED until Nakamura demonstrated one in 1993, building on work by Akasaki and Amano from the mid-1970s to late 80s. These breakthroughs have made LEDs ubiquitous—now they appear in traffic signals, hallway exit signs, table lamps, computer screens, and cellphone flashlights. Most importantly, LEDs’ energy efficiency continues to rise while costs for manufacturing, materials, distribution, and design begin to fall.

At a lighting trade show in Baltimore last month sponsored by the Illuminating Engineering Society, I learned that energy efficiency for LEDs has improved to around 140 lumens (a measure of light output) per watt. Experimental lamps giving 300 lumens per watt have been demonstrated in the lab. At best, incandescent lamps give about 30 lumens per watt and compact fluorescents about 90, while improved discharge lamps give around 130.

Anyone who recalls the blackout during the 2013 Super Bowl will be pleased to learn that manufacturers are working on LEDs suitable for use in large sports stadiums. The long interruption in that game came in part from the fact that the metal halide lamps being used to light the field had to cool off before they would relight. There are versions of these lamps that can restrike almost instantly, but they are very expensive and need special installations to operate. LEDs use a different physics. Because they cost much less per unit, they’re also much more economical for giant displays.

Since Edison’s day, every time a novel light source was unveiled, commentators declared that the end of his incandescent lamp was at hand. This has never turned out to be the case in the past—but we may now actually witness that declaration coming to pass. I expect we’ll be seeing more and more applications for LEDs, especially since they’re already being integrated into smart environmental systems in buildings and homes. Long life spans, already 10 years and better, may mean that changing light bulbs becomes a once-in-a-lifetime experience—or a job for an electrician.

Hal Wallace is curator of the electricity collections at the Smithsonian National Museum of American History. He is the author of Wallops Station and the Creation of an American Space Program. He wrote this for Zocalo Public Square.