As that crisis mood returns, time to say hello to an old friend – Greece 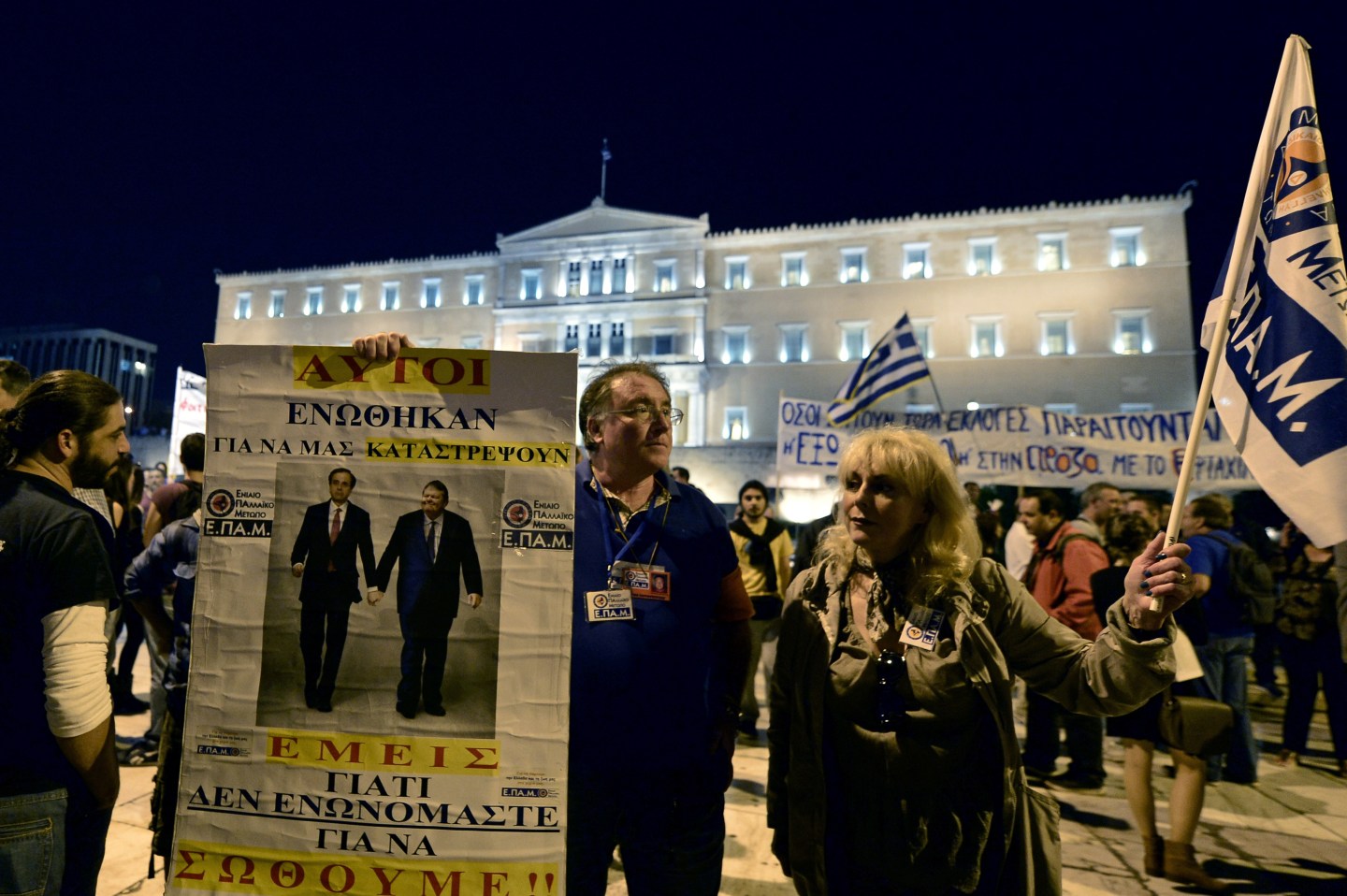 A protester holds a poster depicting Greek prime minister Antonis Samaras and coalition government's vice president, Evangelos Venizelos and reading "they united to destroy us, lets unite to save ourselves" outside the Greek parliament in Athens on October 10, 2014, as lawmakers debate prior a vote of confidence for the Greek Prime minister. Greek Prime Minister Antonis Samaras requested a vote of confidence, to douse speculation about early elections. AFP PHOTO/ LOUISA GOULIAMAKI (Photo credit should read LOUISA GOULIAMAKI/AFP/Getty Images)
Louisa Gouliamaki/AFP—Getty Images

Hey everyone, look who’s here! Greece heard we were having a crisis and decided to stop by…

The tail that wagged the Eurozone dog for fully three years is getting frisky again. Forget the stock market (although the 15% drop in the local benchmark index gives you a good enough idea of what’s going on): the real action is in the government bond market, and the signs there this week have been nothing short of disastrous.

The yield on Greece’s 10-year bond has shot up to 8.92% from only 6.53% in four brutal days, as predictions of a third recession in five years and the lowest inflation rate since 2009 have intensified fears that the region will fall into a deflationary spiral.

The news flow has reminded everyone just how bad debt dynamics in the Eurozone are–a fact that had gotten lost amid complacent assumptions that the ECB would be able to nip in the bud any new bets on the Eurozone breaking up under the pressure of economic stagnation.

Greece, whose government debt will peak at 175% of gross domestic product next year, according to the IMF’s famously rosy forecasts, is the last country that can afford another recession and is, accordingly, the first to show the strain in the bond markets.

In truth, there shouldn’t be any reason to panic. The country isn’t due to lose its safety net from the Eurozone and IMF until early 2016. The European Commission rushed Thursday to assure markets that “there should be no doubt that Europe will continue to assist Greece in whatever way is necessary to ensure reasonable financing conditions for the Greek state and to smooth the path back to full and sustainable market access.”

Secondly, bond traders point out that there is so little trading in the Greek market that it doesn’t take much in the way of news to move yields a long way–especially since much of the market is held by speculative investors, with no real conviction about Greece’s essential creditworthiness.

So why the palaver? In a word, politics. The coalition of mainstream parties that has led the country for the last three years was thoroughly beaten by the radical left-wing party Syriza in elections to the European Parliament in May this year and Syriza’s lead in the polls has only widened since, creating speculation that elections to the (largely ceremonial) post of president next year could trigger a fresh political crisis and early elections.

Desperate for a vote-winning Big Idea, center-right Prime Minister Antonis Samaras has been dropping heavy hints that he’d like to exit the bailout program early (as Ireland and Portugal already have done), and send the loathed “Troika” representatives packing.

With the ECB’s rate cuts and Mario Draghi pledging “accommodative” monetary policy for “an extended period of time,” that policy looked like a no-brainer: no more po-faced foreigners ordering civil servants to be fired, no more forced tax increases and spending cuts, no more dismantling of cherished national taboos.

The last month has exposed the fragility of those assumptions. But more importantly, it has exposed the lack of progress the Eurozone as a whole has made in making the kind of structural (i.e. labor market and regulatory) and institutional (i.e., a single Treasury with shared debt obligations) reforms that would give markets real confidence in its future.

That may be unfair on Greece, which everyone from Angela Merkel to the IMF acknowledges has done more than anyone to get its house in order since 2010. But it doesn’t alter the fact that it will be the first on the block again if the world again starts to doubt the Eurozone’s ability to stick together.

NOTE: This story has been updated to include the political risks of presidential elections which are due early next year.