Hold on a moment, the Eurozone economy isn’t dead yet 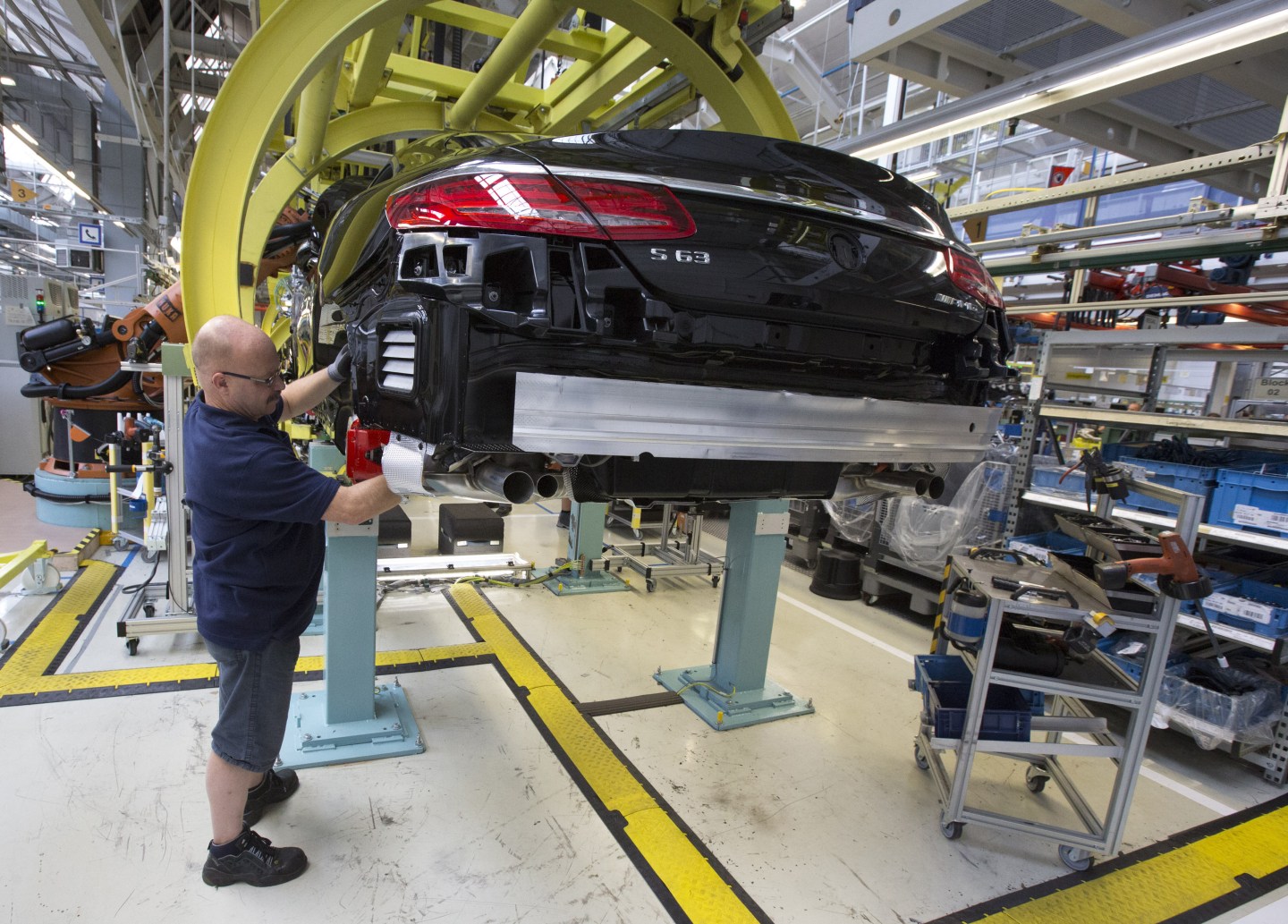 A employee assembles part of the rear running gear on a Mercedes-Benz AG S-Class Coupe, produced by Daimler AG, as the automobile moves along the company's production line at the plant near Stuttgart, Germany, on Wednesday, Sept. 10, 2014. Daimler AG's strategy is focused on leapfrogging Bayerische Motoren Werke AG's namesake BMW marque and Volkswagen AG's Audi to become the world's biggest luxury-car brand by the end of the decade after losing the top rank in 2005. Photographer: Martin Leissl/Bloomberg via Getty Images
Photograph by Martin Leissl — Bloomberg via Getty Images

Reports of the Eurozone economy’s death are exaggerated.

Not by as much as most Europeans would like, it’s true, but still exaggerated. The 18-country currency union is having a rough period, but its German heart is still beating, and more and more parts of it will revive as the euro continues to weaken, supporting exporters in France and Italy and elsewhere, analysts say.

People looking for an explanation for Tuesday’s rout on Wall Street (which spilled over into Asia and Europe) have tended not to look any further than three specific news items this week.

First, Germany warned that industrial production and new orders to manufacturers had fallen in August at their fastest rate since the Great Recession struck in 2009. Then the International Monetary Fund warned that the Eurozone may fall back into recession for the third time since 2008. Markets added two and two together and got something far in excess of four.

The truth is, those German data are very likely to have been a blip. Germany, like the U.S., is a union of federal states. By a quirk of decision-making at state level, all of the works vacations in the most important states for the German economy fell in August this year, instead of being distributed between July and August, as they usually are.

Companies like Volkswagen AG closed their biggest works down for three weeks as usual, and the workers who stayed behind were busier doing maintenance or switching to new product lines than actually making cars– hence a 25% drop in nationwide car production in the month.

But as Eckehart Rotter of the VDA auto industry association in Berlin points out, things had been correspondingly hectic in July and had already returned to normal in September. New orders rose 5% on the month, and they’re up by 4% in the year-to-date. The third quarter was, in fact, the strongest month in Mercedes-Benz’s history, and September was its strongest month ever.

For all the gloom over Ukraine, the VDA hasn’t cut its forecast for a modest rise in sales in 2014 all year. Sales to Russia might be falling sharply, but the U.S. takes 10 times as many German cars as Russia, and the U.K.–growing at over 3% this year–is also a more significant market for now.

And the basic health of Germany’s economy goes well beyond cars, says Carsten Brzeski, chief economist with ING Diba in Frankfurt. Wages are growing at an annual rate of 3%, which is a decent clip given that inflation isn’t even 1%.

The jobless rate, at 6.5% in September, is near a record low and there are more people at work–42.82 million in all–than ever before: ample proof that sclerotic, ageing, uncompetitive economies are quite capable of reforming themselves if only they take the right political decisions, as Germany started to do in 2005.

Brzeski admits that the benefits of those reforms are reaching their end now, but is adamant: “It’s quite clear that the economy isn’t dead, and we’re a long way from needing another short-term stimulus.”

The point, says Berenberg Bank’s chief economist Holger Schmieding, is that Germany pulls the rest of the Eurozone along with it. It isn’t being dragged down by poor performance in France and Italy–it’s the dip in German confidence stemming from the Ukraine and Middle East crises that is causing France and Italy to weaken again. (Spain and Ireland, which have done the best out of the bail-out countries in getting their economies back into shape, haven’t been hit anywhere near as much.)

On top of all this, the euro is weakening rapidly since financial markets woke up to the fact that the European Central Bank has started loosening monetary policy again just as the Federal Reserve starts to tighten it. It’s fallen from $1.39 in March to $1.26 as of Wednesday, and analysts at Deutsche Bank now expect it to fall to only 95c within three years.

As ECB President Mario Draghi knows, that makes all the difference. In a fit of indiscretion a year ago, his Hungarian counterpart Gyorgy Matolcsy said in a speech that Draghi routinely tells other central bankers that even the “Club Med” countries on the Eurozone’s periphery are competitive globally at an exchange rate of $1.10 (the ECB denied it, but the cat was out of the bag).

No-one, especially not Draghi, is saying that a lower exchange rate is any substitute for the kind of reforms that countries like France and Italy need to make, but the short-term support it gives will help create a political environment where governments can afford to be bolder than they have been so far. The question is–will they take what may be their last chance?