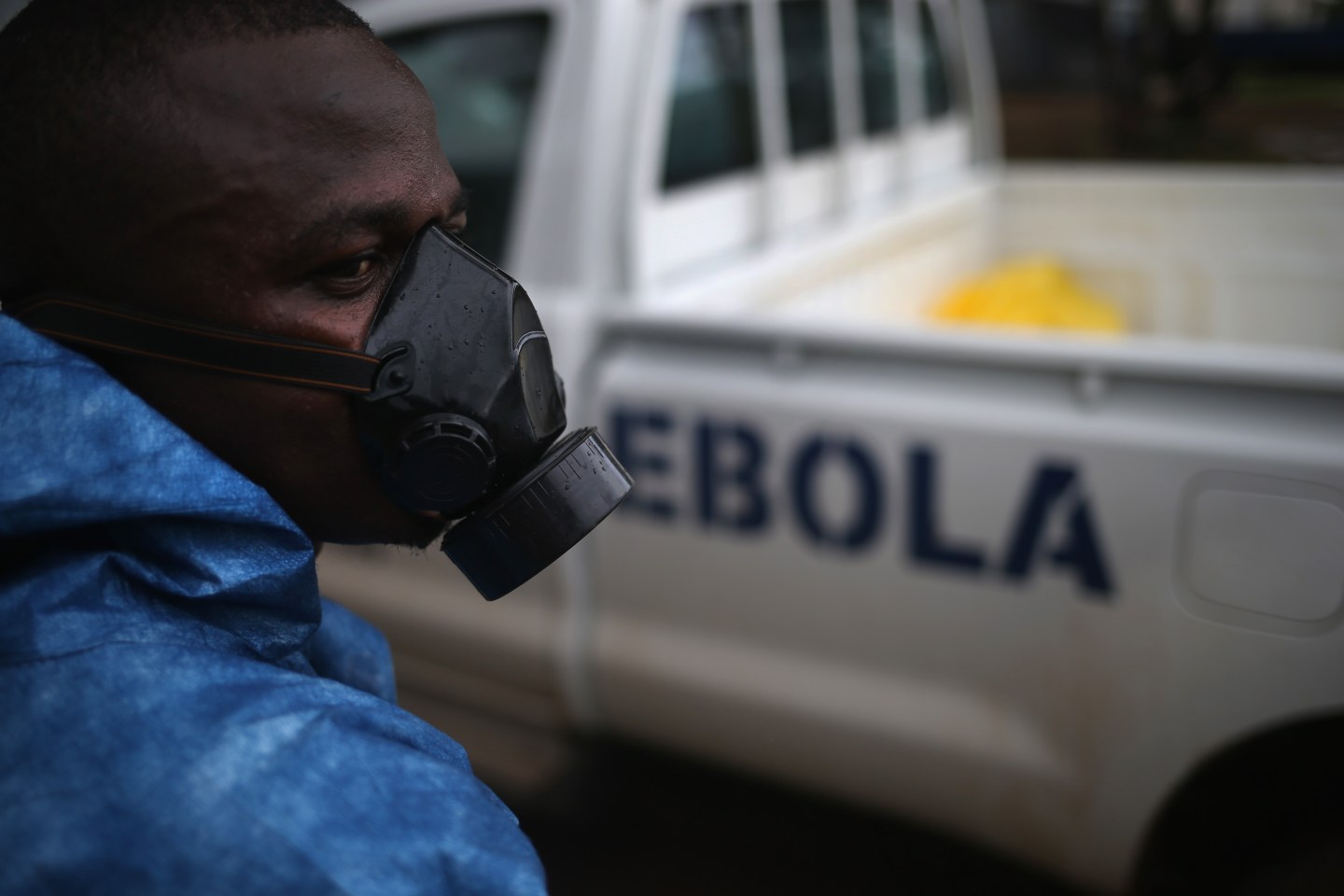 In an hour-long phone interview with Fortune last week, Ed Garcia’s cell phone rang in the background with a cheerful jingle on three separate occasions. Each time, he excused himself to pick it up.

“I have to answer every call…. Every call is important,” said Garcia, the president and managing director of Firestone Liberia, a 185 square mile rubber plantation operated by Bridgestone Americas, the largest employer in the West African nation.

Originally from the Philippines, Garcia has worked for Firestone Liberia—either on the plantation itself or from the United States—for 32 years. He currently oversees the entire Firestone Liberia operation—its rubber farms and rubber wood and hydroelectric power plants, along with 120 housing communities with schools and medical clinics for the companies’ employees and their dependents. All told, Garcia is responsible for 80,000 people.

And since March, he’s been in charge of protecting those residents from an Ebola epidemic that has spread through the West African nations of Liberia, Guinea, and Sierra Leone and has claimed some 3,400 lives.

“It’s Ebola, Ebola, Ebola—it’s breakfast, lunch, and dinner,” Garcia says. “We continue to stay on top of the business and operations, but our priority really is focused on Ebola simply because of the thousands of people that we have to protect here.”

It’s become this way only recently.

The ongoing Ebola outbreak in West Africa started in Guinea in March and quickly spread to neighboring Sierra Leone and Liberia.

The epidemic hit the plantation that Firestone has operated since 1926 six months ago. In a midnight phone call from the concession’s medical director on March 30, Garcia learned that the community had its first case of Ebola. The wife of a Firestone employee had traveled to Lofa—the northernmost county of Liberia, which shares a border with both Guinea and Sierra Leone—to care for her sister who had Ebola and ended up contracting the virus herself.

The phone call triggered what would become a crash course for Firestone Liberia management in how to deal with the disease.

“It was basically like flying an airplane and reading the manual at the same time,” says Garcia. “That Monday morning, we started learning about Ebola. We scheduled a training for medical personnel to start on Tuesday morning,” Garcia says. All 150 of the company’s health workers received training, though only six staff members initially volunteered for the first Ebola treatment team.

The biggest challenge of those first few days was figuring out where to put the Ebola patient, who was contagious via bodily fluids once she started showing symptoms. She couldn’t be admitted to the main hospital because it had no isolation units. The medical staff ended up moving the woman to the hospital’s outpatient facility, which is separate from the main hospital. “By the time she reached our place,” Garcia says, “she was far too advanced.” She died there a day later.

Over the next 10 days, Firestone’s medical staff continued to convert the hospital’s outpatient building into an Ebola treatment facility, retrofitting it to the standards set by the United States Centers for Disease Control and Prevention, with one entrance and one exit. The company even dug a new septic tank for the facility, and it relied on religious leaders and its radio station, The Voice of Firestone, to launch Ebola education programs.

Firestone management was preparing for an onslaught of additional cases, but they never came—not for a while, at least.

The medical staff monitored individuals who may have come in contact with the first Firestone Ebola victim—her immediate family was quarantined for 21 days—but none of them contracted the disease.

“For almost four months after that,” Garcia says, “we were Ebola-free.”

In the regions around the concession, however, the epidemic raged.

In July, more cases popped up in Monrovia, Liberia’s capital, 35 miles west of the Firestone concession. The situation in Kakata, a town less than five miles north of the plantation’s northern border, was just as dire. The C.H. Rennie Hospital in Kakata eventually shut down. Its staff dwindled as health workers deserted their jobs due to fear of the disease or died from it. With no place to turn, C.H. Rennie began to send what it thought were non-Ebola cases to Firestone Liberia’s hospital.

Two of those patients—one of whom was referred to Firestone for pregnancy-related needs and another who was suspected of suffering from a drug overdose—ended up having Ebola and died at the Firestone facility. The pregnant patient’s baby was stillborn.

In early August, the concession saw a surge in cases that Garcia says is attributable to the disease’s infiltration of nearby towns. “Things just went out of control very fast,” Garcia says.

As of late last week, there had been 74 cases of Ebola at Firestone Liberia—about 60% of which involved individuals directly associated with company. Of those who contracted the disease, 54 are dead. Thirty-two of the deceased are Firestone employees or their dependents. On several occasions over the last two months, the company’s new, 23-bed Ebola facility has neared full capacity.

In an effort to contain the surge of new cases, the concession’s management took on what Garcia calls “herculean” efforts. Its Ebola medical staff increased from six to about 50 people. A conference room next to Garcia’s office morphed into a war room to collect data on Ebola patients’ potential contacts and reports of potential new cases. (Firestone Liberia residents are supposed to be on the lookout for unusual activity or neighbors who may be hiding sick relatives or disappearing themselves.) Employees entering Firestone facilities must stop to wash their hands and receive a temperature check. The concession’s 27 schools closed have because of the epidemic and three of them now function as quarantine centers. And the company’s education efforts continue.

The concession’s rubber business, meanwhile—which typically produces 30 million pounds per year—has taken a hit. Its agricultural operation—rubber trees, mainly—is running at close to 100%, but its rubber wood mill has seen a 50% drop-off in production. The biggest blow to production has been the government-instituted curfews that have cut operating hours and the epidemic’s effect on local, private rubber farmers in Liberia, from whom Firestone buys some of its supply. That volume has decreased by 25%, Garcia says.

Just over ten years ago, Firestone Liberia was caught in the middle of the nation’s 14-year civil war, which caused the plantation to shut down for several years and inflicted severe damage to the company’s factory, worker housing, schools, power generation, and medical facilities. Garcia helped lead that team that rehabilitated the plantation and got it up and running afterwards. By comparison, the Ebola epidemic, he says, is a bigger challenge.

According to Garcia, the Firestone Liberia team has made headway on that tough task by monitoring potential Ebola contacts—212 people are currently in voluntary quarantine. At a press conference in September, the director of the Centers for Disease Control and Prevention Tom Frieden credited Firestone Liberia for tackling the Ebola crisis promptly and without government support. Firestone Liberia had decreased its Ebola case count to zero, says company spokesman Don Darden, but on the weekend of October 4-5 that changed. By Tuesday, it had four patients in its Ebola treatment center.

Firestone Liberia has been working alongside the CDC since its first Ebola case, and last week, it started working with an international aid group called Samaritan’s Purse, which recently donated 100 tons of supplies to Liberia. More help arrived in the region earlier this month after President Barack Obama ordered the deployment of U.S. military troops to assist in combating the Ebola crisis.

When asked to assess his company’s response to the epidemic, that’s the one thing Garcia says he regrets —“I wish more help had come to Liberia sooner.”