In Africa, foreign corporations protect their own from Ebola 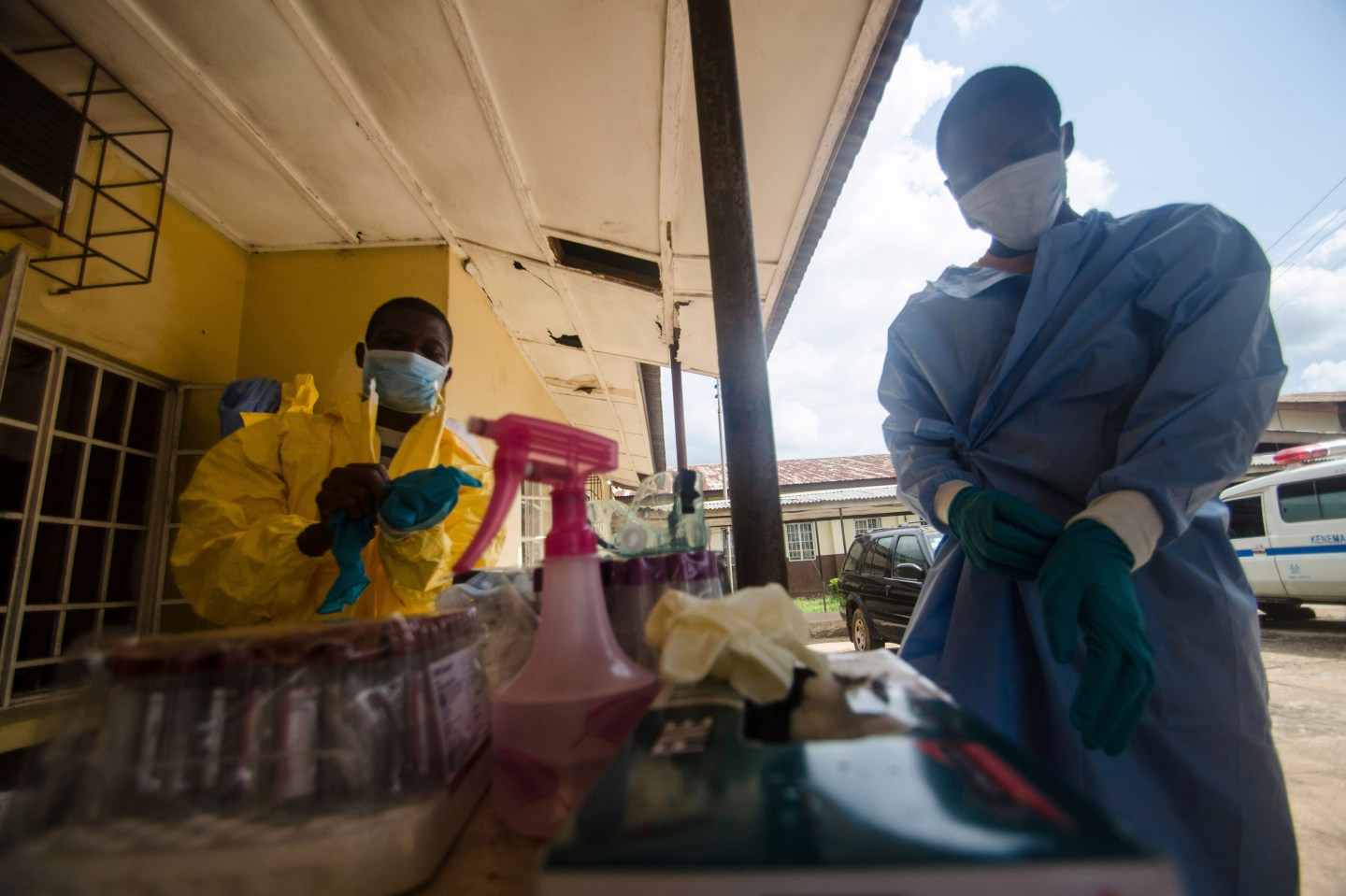 Medical staff put on protective gear in Kenema government hospital before taking a sample from a suspected Ebola patient in Kenema, July 10, 2014. Ebola has killed 632 people across Guinea, Liberia and Sierra Leone since an outbreak began in February, putting strain on a string of weak health systems facing one of the world's deadliest diseases despite waves of international help. Picture taken July10, 2014. REUTERS/Tommy Trenchard (SIERRA LEONE - RTR402SP
Tommy Trenchard—Reuters

As the White House launched its Africa summit this week and pledged $14 billion in investment in the continent from U.S. corporations, National Security Advisor Susan Rice said that the United States doesn’t see Africa “as a pipeline to extract vital resources, nor a funnel for charity.” Instead she said, the U.S. wants to be a partner to create jobs, resolve conflicts, and develop the continent’s economy.

The contributions that multinational companies make to Africa—beyond the financial kind—is currently on display as the western region of the continent battles an Ebola virus outbreak that’s taken the lives of more than 930 individuals in Guinea, Sierra Leone, and Liberia.

The first cases of Ebola in the ongoing outbreak occurred in March in Guinea and quickly spread to neighboring Sierra Leone and Liberia—marking the first time the disease has plagued Western Africa. Around the same time, the wife of an employee at Firestone Liberia—a 100,000-acre rubber plantation owned by Bridgestone Firestone, where 80,000 company employees and their family members live and work—contracted Ebola after traveling to care for relatives.

“She came back over the weekend and passed away by Thursday,” says Don Darden, the executive director of communications at Bridgestone Americas.

The woman’s death prompted the creation of a company task force dedicated to educating the 7,300 employees on the plantation and their families. Clergy at the churches on Firestone’s property spread word about the virus’s early symptoms and how to get treatment, as did the plantation’s radio station, The Voice of Firestone.

In a matter of 10 days, the company revamped a portion of its 300-bed hospital—formerly an outpatient facility—into an area suitable for treating Ebola patients, retrofitting it to follow the Center for Disease Control and Prevention’s guidelines. There’s only one way into the facility and one way out, with knobs on only one side of those doors. The company even dug a new septic tank so waste from the facility went into its own system.

But since construction ended in early April, the facility has been empty. Since the first case killed a Firestone worker’s wife, the company has “held [the virus] off pretty well,” with no other infections reported, Darden says.

That is, of course, not the case elsewhere in Liberia and West Africa overall.

In June, humanitarian group Doctors Without Borders sounded the alarm, saying that it was “overwhelmed” by an epidemic that was “out of control.” In the weeks since, things have only grown worse, with the death toll rising and the virus taking the life of Samuel Brisbane, a top Liberian health official, and infecting two American missionaries who were transported to Emory University Hospital for treatment this week.

Liberia’s hospitals are overcrowded and understaffed, with Elwa Hospital near Monrovia, the capital of Liberia, having to turn away Ebola cases this week. On Thursday, the nation’s president Ellen Johnson-Sirleaf declared a state of emergency. And on Friday, the World Health Organization declared that the outbreak constituted a global health emergency.

The Ebola facility at Firestone Liberia is reserved for company employees. “We’re not equipped if the whole country starts sending patients here. We worked with the ministry of health and they had other options. It’s a private hospital,” says Darden, adding that the company would “provide emergency treatment to [non-employees] if the need arises.”

Firestone has harvested rubber in Liberia since 1926, when it signed a concession that—at a cost of 6 cents per acre—gave the company control of one million acres, representing 4% of the country and nearly 10% of its arable land. Firestone has been accused of relying on child labor, subjecting employees to backbreaking quotas, paying piddly wages, and providing worker housing that resembles shantytowns. In 2008, Firestone agreed to renegotiate its concession with President Johnson-Sirleaf’s government, and while the new accord addressed at some of these worker rights issues, the company still stands as an example of a firm that’s bound to a government concession that requires tax and royalty payments, but whose contributions beyond that are voluntary.

Developing nations are often desperate to attract investment, says Scott Taylor, associate professor and director of the African studies program at Georgetown University. So, governments in Africa are not likely to pressure U.S. corporations to create an all-around better existence for Africans. Instead, such efforts will need to come from corporate leaders’ interest in building goodwill with the population. In Taylor’s view, corporations investing in the continent now have added incentive to do just that. As African nations become more democratic, their people have become more politically vocal, and the potential backlash of being pegged as a “corporate colonialist” has grown into a bigger threat.

“There have always been people saying that this corporation pollutes or isn’t hiring local workers,” Taylor says. “Those are valid complaints but people haven’t had tools or power historically to do something about it.” That’s starting to change, Taylor says. South African grocery and retail chain Shoprite left Tanzania this year after facing criticism that it hadn’t tapped into local supply chains. And in Zambia, complaints over labor practices and pollution have been lodged at a Chinese-owned mine at Chambishi, the site of a 2005 explosion that killed 50 workers.

Corporations that have recently invested in the continent are aware of this shift, Taylor says. Luxembourg-based ArcelorMittal, the world’s largest steel maker, for instance, is a relative newcomer. It was one of the first companies to invest in Liberia after the second civil war ended in 2003. The company renegotiated the terms of an initial contract after Johnson-Sirleaf, who assumed the presidency in 2006, deemed it inequitable. As a result of the new concession, ArcelorMittal released an environmental and social impact assessment available and made a novel pledge to contribute $3 million dollars per year to a social development fund that’s intended to offset the impact of the company’s activities. ArcelorMittal also committed to opening hospitals for its employees and the public.

Like Firestone, ArcelorMittal recently prepared the hospitals at its mine in Yekepa and at its Buchanan port for a potential Ebola outbreak. But unlike the tire maker, as of Tuesday, “all of [ArecelorMittal’s] hospitals are open to the public,” says Hesta Pearson-Baker, a spokesperson for ArcelorMittal.

While the treatment at the hospitals is free for ArcelorMittal employees, prices charged to non-employees are out of reach for many nearby residents, according to a 2012 report by the Center for International Conflict Resolution at Columbia University.

Neither ArcelorMittal (MT) facility has accepted an Ebola victim yet, which Pearson-Baker attributes to the facilities’ locations—Buchanan is two hours from Monrovia; Yekepa is a 10-hour drive—so the company has dispatched its doctors to train workers who are conducting virus scans at the nation’s largest airport.

While the White House has touted the $14 billion corporate investment in Africa, the “broader African prosperity” that the administration is aiming for is likely to hit major roadblocks—like, say, a virus outbreak. It will do the continent and its people no good if the companies seeking to transform Africa’s economy stand by in such instances and only take care of their own.

“It just can’t be business as usual in terms of resource extraction where a company just goes in walls itself off and only serves the interest of workers and maybe their families,” Taylor says. “A company has to be good citizens and provide outreach to local communities; it’s part and parcel of doing business in the long term.”