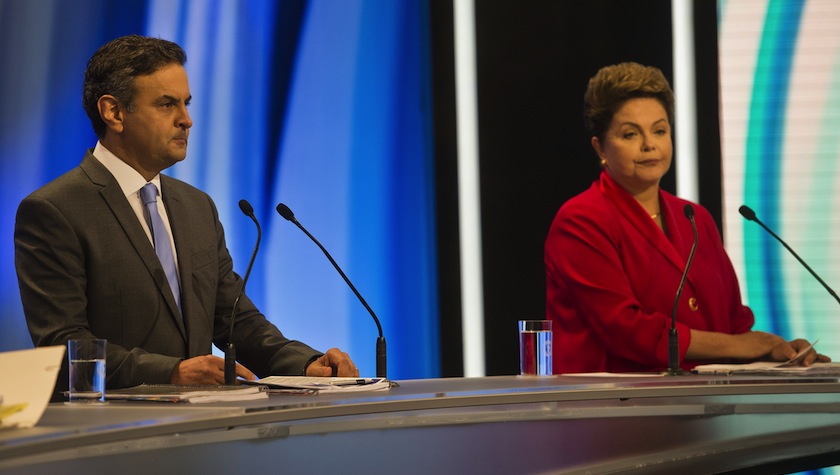 “Today is a sad day for Brazil. The country entered a technical recession. The truth is that the government failed and its legacy will be high inflation, high interest rates and a growing loss of confidence in our economy….”

Brazilian presidential candidate Aécio Neves voiced to reporters on Aug. 29 his dismay with his country’s declining GDP. Third in the polls and representing the Brazilian Social Democratic Party (PSDB), the senator and economist’s words against current President Dilma Rousseff and her government come as no surprise, considering her Workers’ Party has been embattled in a bitter rivalry with Neves’s PSDB since the mid-1990s, when the two factions went their separate ways after working together to oppose Brazil’s military dictatorship in the late-1970s through the 1980s.

After years of making headlines for being a BRIC nation-on-the-rise, Brazil’s growth has stagnated over the past three years, with its biggest downturn coming in the April-June period. The country’s GDP shrank by 0.6%, following first-quarter results that were revised down from positive 0.2 % to negative 0.2%. This is Brazil’s first confirmed recession since the 2008-2009 global financial crisis, giving Neves and Marina Silva—Rousseff’s primary opponent in the Oct. 5 elections—one more point to use against her.

This week, Brazilian stocks took a significant tumble and the Brazilian real dipped to a five-year low.

Brazil’s economy grew an average of 4% from 2003 to 2009 and peaked at over 7% in 2010 during the administration of Rousseff’s predecessor, Luiz Inácio Lula da Silva. With Rousseff at the reins, average growth is set at less than 2%.

And while the economy has taken a turn for the worse on her watch, not everyone is convinced it’s Rousseff’s fault.

“Commodity prices—the main factor behind the boom of the Lula years—stopped rising,” says Brazilian economist and blogger Luciano Sobral. “Much of the optimism of the recent past was just extrapolation of a short-term trend, or was based on the wrong belief that some structural change was taking place.”

Brazil’s fortunes were highly dependent on global commodity prices, not the kind of internal economic development that leads to sustained GDP growth. Some, but not all, of that imbalance can be laid at the feet of politicians like Rousseff.

“I cannot blame Dilma for not being as lucky as Lula,” Sobral adds. “However, I think she and her party have been in denial since the start of the global economic crisis. Most of the real challenges presented to the Brazilian economy since then — falling export prices, loss of competitiveness, inflation, disappointing growth — are not being directly confronted. I think when Dilma came to office she had in mind that some important market failures, such as a deficient credit market or high electrical energy prices, could be solved with nothing more than political will.

“What she is now bitterly finding out is that those problems have much deeper roots, and the way she chose to tackle them has been feeding huge imbalances.”

No matter who is to blame, the data confirming Brazil’s recession came at a terrible time for Rousseff. Previously marked as an easy favorite for the win, the current president gained a tough opponent when Silva stepped up as the Brazilian Socialist Party (PSB) candidate after her running mate, Eduardo Campos, died in a plane crash in August.

Since Silva became a candidate, it has been a battle at the polls between the women in the top two spots, with many considering voting for Silva only to take Rousseff out of the race. Polls initially showed Silva winning in second-round voting, but the tides have since turned, with the latest survey giving 39% of votes to Rousseff, 25% to Silva and 19% to Neves in the first round. But Brazil’s economic situation is certainly not the most pressing issue among voters, with education, healthcare, and security at the forefront of people’s minds since the protests that swept across the country starting in June 2013.

“A large share of the population is somewhat shielded from the slowing GDP growth and rising inflation, since social benefits and wages are practically indexed to inflation,” says Sobral.

“Dilma is the public face of this government, so it is unavoidable people will blame her for most of what is happening in the country, regardless of her actual responsibility. I think this is natural in any presidential democracy.”