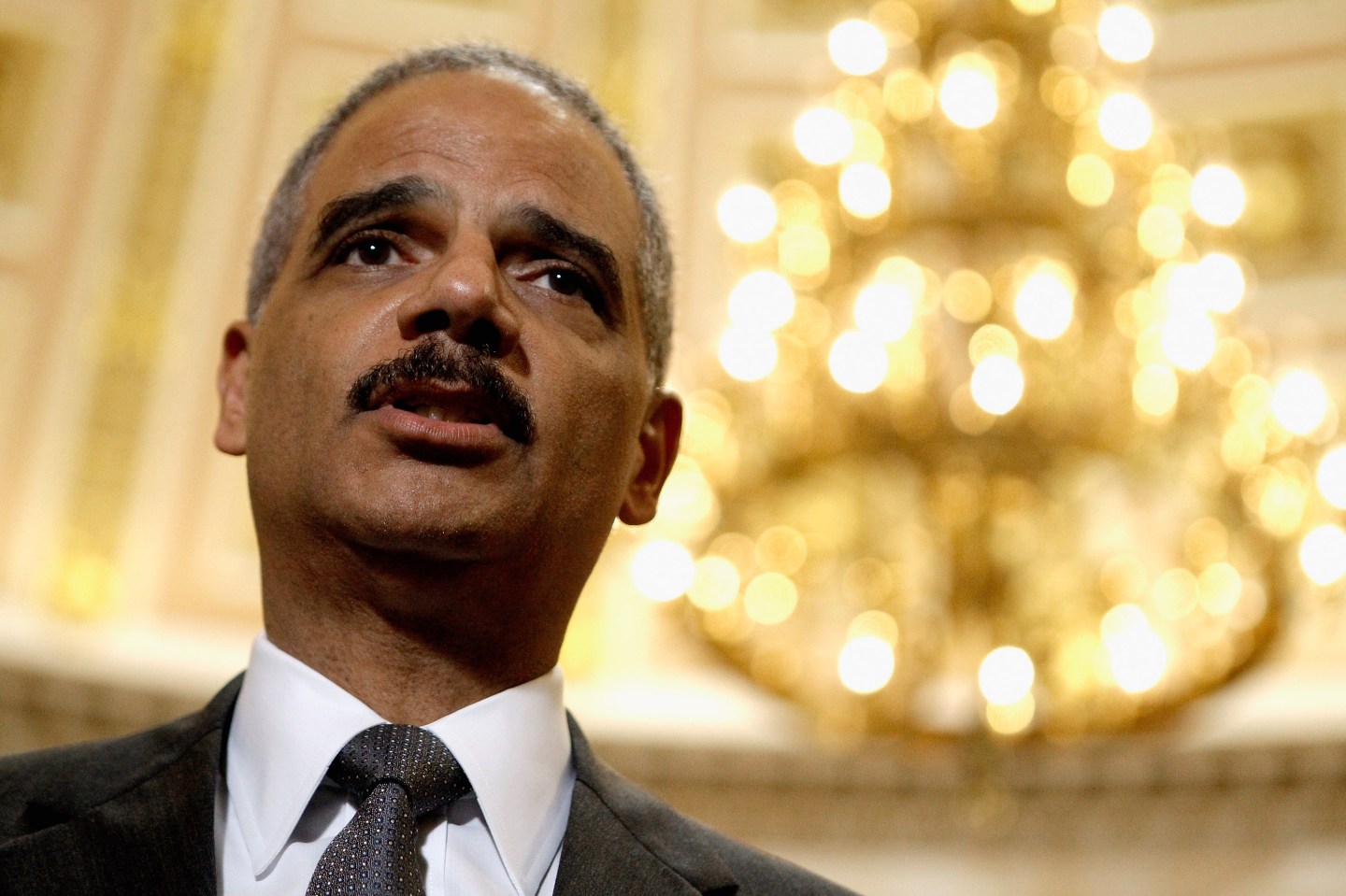 WASHINGTON, DC - JUNE 19: Attorney General Eric Holder talks to reporters after meeting with House Oversight and Government Reform Committee Chairman Darrell Issa in the U.S. Capitol June 19, 2012 in Washington, DC. Issa and Holder did not appear to find any more common ground about the release of documents related to the Fast and Furious program and the committee plans to move forward Wednesday with a vote to hold Holder in contempt of Congress. (Photo by Chip Somodevilla/Getty Images)
Photo by Chip Somodevilla—Getty Images

“That area of his record is terrible,” says Robert Weissman, president of the progressive nonprofit, Public Citizen.

Weissman is criticizing U.S. attorney general Eric Holder for his “utter failure to prosecute any [major] institution or person for the events that led to the financial crisis and all the ensuing social devastation.”

Holder announced yesterday that he’ll step down from the post he’s held since 2009 as soon as the president appoints a successor,

The popular vein of criticism being voiced by Weissman, and encapsulated in the phrase “too big to jail,” is the albatross that threatens to weigh down Holder’s legacy in the business realm.

It’s more than just a cheap shot leveled by people that don’t really understand the fine points and technicalities of the criminal justice system. U.S. District Judge Jed Rakoff, a former chief of the business fraud unit of the Manhattan U.S. Attorney’s Office, published a powerful article in the New York Review of Books last January that, while tempered with judicial disclaimers and caveats, unmistakably conveys his slack-jawed disbelief that the “colossal frauds” the government has alleged in so many civil cases could not also have engendered at least one successful criminal prosecution.

To be sure, Holder’s legacy as attorney general will be determined by a much broader record of accomplishment and failure than just his stance on corporate crime. Historians will likely focus far more on the impact he had on civil rights, including gay and voting rights; his preference for prosecuting terrorism in criminal courts rather than military tribunals; his attempt to bring more equity in sentencing and drug crime prosecutions; his apparent tolerance of vast domestic surveillance in the name of fighting terrorism; and his surprising persistence in bringing leak prosecutions, even when it meant subpoenaing journalists, including New York Times reporter James Risen.

But in the business realm, will Holder’s champions have a case for counteracting criticism like Weissman’s?

Well, in recent years Holder has certainly been punishing banks with unprecedented civil fines and penalties. Laast month he won a $16.65 billion settlement from Bank of America Corp. (BAC) the department’s largest with a single entity in history, for misrepresentations it made (or that its teetering acquisitions, Countrywide and Merrill Lynch made) about residential mortgage-backed securities (RMBS) during the runup to the crisis. Last November, he grabbed $13 billion more from JPMorgan Chase (JPM) for its similar conduct (and that of the companies it acquired, Bear Stearns and Washington Mutual). He picked up another $7 billion in a deal with Citigroup (C) in July, also stemming from alleged RMBS-related fraud.

And once we get past the financial crisis, Holder’s record looks tougher. His department came down hard on BP for the Deepwater Horizon oil spill disaster. In November 2012, BP pleaded guilty to 11 felony manslaughter charges, environmental crimes, and obstruction of Congress, and agreed to pay $4 billion in criminal fines, even as the Justice Department continues to seek additional relief from BP in civil proceedings. (That’s all over and above, of course, the many billions BP has paid, and has yet to pay, in ongoing private litigation.)

Finally, this past July his department obtained a guilty plea from Paris-based bank BNP Paribas (BNP), for processing illegal transactions with Sudanese, Iranian, and Cuban entities, in violation of the Trading With the Enemy Act. BNP coughed up about $9 billion in forfeitures and fines.

“During attorney general Holder’s tenure, the sanctions on business have increased hugely,” Jamie Gorelick told me in an interview. Gorelick was deputy attorney general during the Clinton Administration, and is now a partner at the law firm of WilmerHale. “It used to be that a billion-dollar resolution was extraordinary. Now we have resolutions at levels many, many times that number.”

So, yes, Holder’s champions will have some basis to commend his record on business crime.

But in the end, the die is cast. With each new multi-billion-dollar recovery the government wins from Bank of America, JP Morgan, Citigroup, or some other company accused of civil fraud in connection with the conduct that launched the worst financial crisis since the Great Depression, the more inconceivable it seems that there wasn’t also some prosecutable criminal wrongdoing going on at the time.

“Too big to jail” will be Holder’s sad legacy.