Barbara Banke: Queen of the Vine 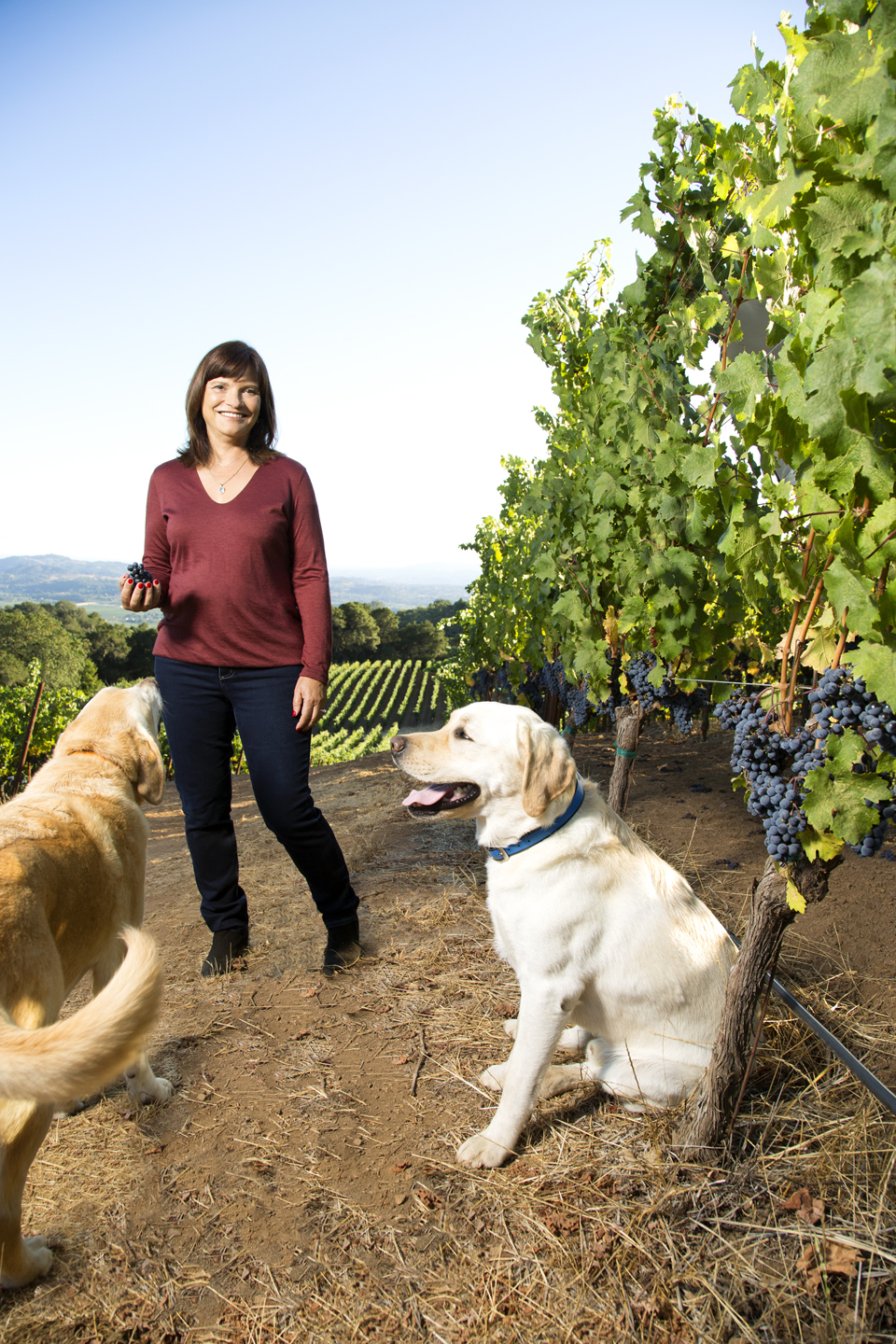 Barbara Banke
Age: 61
Title: Chairman and proprietor, Jackson Family Wines
Background: Before JFW, ran a law practice specializing in land-use cases
Belief: “We are on the cusp of a major wine shortage, thanks primarily to growing demand from Asia.”

Barbara Banke’s first date with famed California winemaker Jess Jackson back in 1984 was a hot one. Scorching, in fact. Jackson was running a little late. Juggling a busy San Francisco legal practice with the Sonoma County winery he’d just founded was proving challenging. Today Jackson Family Wines produces the top-selling wine in the U.S.—Kendall-Jackson Vintner’s Reserve Chardonnay. But back then Jackson was just another rich guy from the city who thought it would be fun to own a vineyard, and the varietal he was bottling, chardonnay, was a bit player in the U.S. wine market.

With Jackson stuck in a meeting, Banke, Jackson’s law partner at the time, drove over to his San Francisco condominium to get a headstart on dinner. “I was going to make chicken piccata,” recalls Banke. “I had this pan with oil on the stove. I thought the stove was off, but it wasn’t. It was on high.” When Banke returned to the kitchen, the stovetop was ablaze and the condo was filling with smoke. Understandably, Banke was a little nervous when Jackson finally arrived on the scene, just as firefighters were finishing up. “Well,” Jackson announced, “I guess we’re going out to dinner.”

It was a heated beginning to what became a loving and profitable partnership. Jackson and Banke married in 1984, and Banke, a real estate lawyer by training, spent the next 25 years by Jackson’s side as co-proprietor of Jackson Family Wines. JFW is now the nation’s largest seller of “premium” wines, defined as $15 a bottle and up, with $604 million in 2013 revenues. Its brands include La Crema, Cambria, and several other labels, in addition to the Kendall-Jackson flagship.

By the 1990s, Jackson, a charming, sometimes ruthless force of nature, had become the public face not only of JFW but arguably of the entire California wine industry. Banke played a key operational role: When Jackson wanted to acquire a rival vineyard (a regular occurrence), she came up with creative legal and financial ways to make it happen. But outside JFW, the introverted Banke was largely unknown. So when Jackson died in 2011, after a three-year battle with skin cancer, and left Banke in charge, no one knew what to expect. “Many of us were wondering,” says Rob McMillan, head of wine industry lending for Silicon Valley Bank, whose first loan as a banker was to Jackson. “But it’s clear she’s not just playing it safe.”

Far from it. Banke, 61, has placed a nine-figure bet on her conviction that the world is on the verge of a major oenological crisis. There simply aren’t enough quality vineyards, she says, to meet soaring wine demand from the emerging middle class abroad and from millennials here at home. “Within five to 10 years, absent a miracle, there will be a global wine shortage,” Banke says.

Her strategy has been to expand aggressively, before vineyard prices explode. She has spent more than $100 million over the past three years buying vineyards and land in California’s Sonoma, Napa, and Mendocino counties, as well as in Australia and Oregon. She didn’t have to do so—sales of JFW’s wines are growing at a 10% clip already—but Banke says, quoting Jess, “You can’t have the benefits of making something great without taking great risks.”

It’s no surprise that real estate informs Banke’s perspective on the business. She grew up in Southern California, the daughter of an aerospace engineer and a homemaker. “He did testing of the heat shields on everything from the Gemini space capsule to the space shuttle,” says Banke. Odd as it may sound, it was her father’s career that got her interested in land. “Aerospace in L.A. in the 1960s and 1970s was very volatile because contractors would get contracts and then lose contracts when the government funding dried up,” she says. “He was laid off two or three times.”

Banke’s parents’ response to this financial uncertainty was to invest in small apartment buildings; their four kids spent weekends painting the units. “The lesson learned was that real estate could provide steady income,” Banke says.

After getting her law degree from UCLA’s Hastings College of Law in 1978, Banke moved to San Francisco and built a reputation as a skilled, aggressive real estate attorney, one who argued land-use and eminent-domain cases at a time when the California courts were increasingly hostile to developers. Banke eventually teamed up both personally and professionally with Jackson, who had a rival practice but was spending more and more of his time making wine.

It was a hobby that Edward Humes, author of the Jess Jackson biography A Man and His Mountain, calls “the greatest second act in entrepreneurial history,” but one that didn’t go over so well with Jane Jackson, Jess’s first wife, whose family name is the Kendall of Kendall-Jackson. According to Humes, she disapproved of Jess’s midlife career change, eventually leading to their divorce.

Unlike her late husband, Banke is not a natural people person. She sometimes avoids eye contact, and talking about herself does not come easily. But Banke began to open up after I joined her, her two Labrador retrievers, and neighbor Peggy Furth on their daily 90-minute hike near Banke’s mountainside home in Geyserville, Calif. “It clears my mind,” she says of her morning treks.

When it comes to discussing her views on the wine industry, however, Banke has plenty to say. As we travel by helicopter from a mountainside vineyard JFW just planted in Mendocino County to another recent acquisition in Sonoma’s Russian River Valley, the view from 4,000 feet seems to contradict Banke’s wine-shortage thesis. In every direction, vineyards dominate the local landscape. Plus, March and April rains replenished drought-depleted lakes and reservoirs, boosting hopes that 2014 might yield what would be a third consecutive bumper crop for California varietal grapes. (Fortunately for winemakers, the Napa earthquake struck before most 2014 grapes were harvested, so production wasn’t greatly affected.)

Looks can be deceiving, Banke says. There is just too little undeveloped, plantable land left in Sonoma, Napa, and California’s other premium wine-growing regions to satisfy the growing global demand for wine. Even under ideal conditions, producing enough supply will be a challenge. Consider grape prices: The average price of California wine grapes rose 32% between 2010 and 2013, according to the National Agricultural Statistics Service. “What happens,” Banke asks, “when we get a smaller crop?”

Behind the increasing demand for wine is Asia, particularly China, say fellow wine bulls Tom Kierath and Crystal Wang, wine-and-spirits industry analysts at Morgan Stanley. They predict that Chinese wine demand will double to 400 million cases by 2016, which would make China the world’s largest wine consumer—and probably the largest importer too.

A recent surge in grape and vineyard prices seems to reflect the expectation of rising global wine demand. According to Napa vineyard broker Bergman Euro-National, top Napa vineyards are now selling for $300,000 an acre, vs. $200,000 five years ago. However, Michael Yurch, the former president of prominent New York City wine retailer Sherry-Lehmann and today the head of wine consultancy Bluest Sky Group, sees some irrational exuberance in the high prices. One of his clients in Spain, he says, is ignoring the Chinese market because he believes China will eventually produce most of its own wine. Then there’s the knockoff problem. In 2012, Chinese police seized 10,000 fake bottles of Château Lafite Rothschild, according to BBC News. The real stuff would have fetched $16 million. (Banke acknowledges the knockoff problem but still expects China to be a huge wine importer.)

Banke is planting a major flag in Oregon, despite the fact that Jackson was ambivalent about its winemaking potential. Banke’s six Oregon deals have made Jackson Family Wines the single biggest vineyard owner in Oregon. Pinot noirs are the fastest-growing red-wine varietal, and Oregon pinots are now recognized as world-class. Domaine Serene’s 2011 vintage, for instance, was ranked third overall on Wine Spectator’s 2013 Top Wines of the Year list.

Banke, with late husband and JFW proprietor Jess Jackson, handled much of the winery’s dealmaking before taking over in 2011.Photo: Michael Regnier—Courteys Kendall Jackson

Mitigating the risk is the fact that land in Oregon wine country is cheap. Banke paid around $35,000 an acre for the Oregon vineyards, a pittance compared with the going rates of $300,000 and $125,000 for high-end land in Napa and Sonoma, respectively. Based on the quality of the wine those vineyards produce, “I think it’s worth twice what we paid,” Banke says.

Oregon also offers a less cumbersome regulatory environment. It typically takes no more than two months to get a permit to construct a new winery there, a process that can take seven years in California. Gushes Banke: “When we asked what our permit requirements were for planting a new vineyard, they said, ‘Permit? For a vineyard?’”

The second element of Banke’s strategy concerns millennials. In 2011 she launched a new brand—Avant—aimed at the under-35 crowd, which she is convinced is full of budding oenophiles. (It may help that she and Jackson had three millennials of their own, all of whom work at JFW.) Avant made its debut in 2011 with a chardonnay, and in 2014 added a sauvignon blanc and a red blend, specifically tailored to the under-35 generation. The labels are colorful and eye-catching, and they tout Kendall-Jackson’s commitment to sustainable agriculture. JFW is also aggressively using social media to promote Avant—hiring in-house bloggers to write about wine and food pairings and ideas for wine-friendly theme parties. “It’s marketing that doesn’t feel like marketing,” says Caroline Shaw, JFW’s chief marketing officer.

The wines themselves are created to appeal to younger palates. Banke believes that millennials prefer fruitier, more acidic flavors. Most Kendall-Jackson wines are aged in traditional French oak barrels, but the Avant chardonnay is aged differently—60% in stainless-steel tanks and 40% in previously used, or “neutral,” oak barrels that add negligible flavor.

The strategy seems to be working. The Avant sauvignon blanc sold out its entire 30,000-case production five months after its April 1 debut. And JFW says 2014 sales of the Avant Chardonnay—which received a 90-point score from Robert Parker of The Wine Advocate—are running 11% ahead of last year’s. Around $15 a bottle, Avant Chardonnay “tastes as if it cost two or three times the price,” Parker writes.

JFW’s youth strategy is not without critics, in part because those under 35 account for only 13% of all U.S. wine priced above $20 per bottle, compared with 42% for boomers, according to Silicon Valley Bank. Banke counters that previous marketing efforts failed because they were based on the assumption that wine must be dumbed down. “The millennial generation likes complexity,” says Banke. “If they don’t know anything about a wine, they get out their smartphone and Google it.” They have also been conditioned to pay for it; Banke calls this the Starbucks effect. “They’ve already been paying $5.50,” she says, “for a half-caf soy-milk latte with one pump of vanilla.”

It will take some time before we know whether Banke’s bold thesis will pay off. In the meantime, one thing is clear: Anyone who thought Banke would turn the heat down when she took over at JFW was very, very wrong.

ALSO CHECK OUT: Food & Wine and Fortune’s The Most Innovative Women in Food and Drink List