Who went to Burning Man? 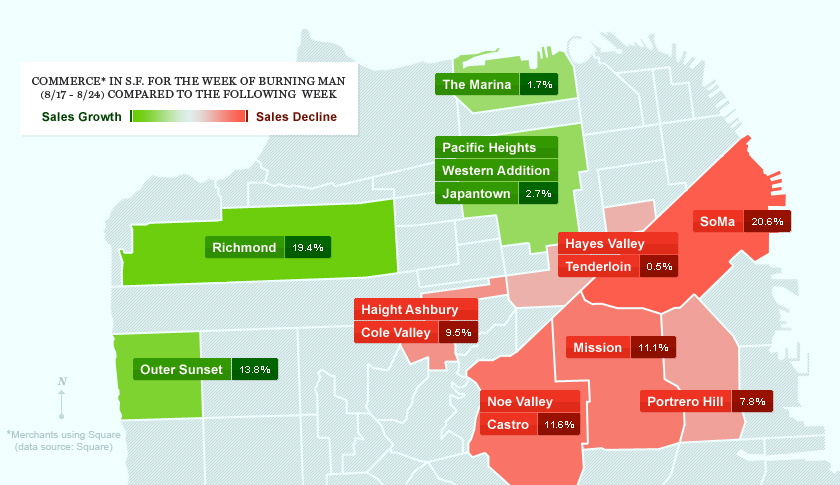 Big events such as concerts, football games, and festivals typically bring a surge of economic activity around their venues. Burning Man, the annual art-nature-tech celebration that drew some 70,000 people to northern Nevada last month, is no different. How big is that impact? According to the Reno Gazette-Journal, the festival last year brought $55 million to the local economy.

That surge in spending came at the expense of some other place, of course. “Burners” hail from all over the country and world, but San Francisco, where the festival was born, is home to the largest concentration. The city is famously empty during that week, and the pilgrimage to the “playa” affects some neighborhoods disproportionately.

Data from Square, the mobile credit card processing company, suggests merchants in the South of Market neighborhood saw as much as a 20% drop in business the week of Burning Man compared to a typical week. The Mission, Noe Valley, Castro, Haight Ashbury, and Cole Valley all saw drops of between 9% and 11%. Potrero Hill was not far behind, with a 7.8% drop. Bucking the trend, commerce was up sharply in the Richmond, a neighborhood popular with families, perhaps due to increased shopping during a the Labor Day weekend.

What do all the neighborhoods that saw drops have in common? They’re on the south side of the city and are home to the majority of tech workers in the Bay Area. No surprise there. Now if someone could only measure the drop in tech productivity that week. Lines of code not written? Deadlines blown?