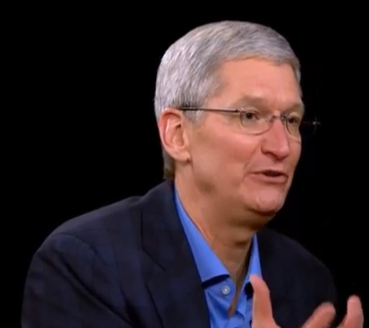 The first installment of Charlie Rose’s interview of Tim Cook was video worth watching.

The second installment, which aired Monday night and showed up on Hulu and YouTube Wednesday morning… not so much.

Cook is not an educator, or an expert on the environment.

He’s best on the subject he knows better than anyone: What it’s like to run the company that Steve Jobs built.

He gets into that toward the end, comparing his time at Compaq, where the objective was to become a $40 billion company, to working at Apple.

The goal at Apple, in Jobsian terms, is to put a dent in the universe. Cook, less the showman, more the engineer, puts it more modestly. What gets him up in the morning, he says, is not to have the largest market cap, but the opportunity to “move the dial on the world.”

To all the shareholders out there, I’m not saying I’m not focusing on you. I’m talking about what drives people. What we’ve learned is something simple: If we focus on great products that enrich people’s lives, and we do that well — very well — the financial returns will follow, and our shareholders will be happy.”

Below: The Hulu video.