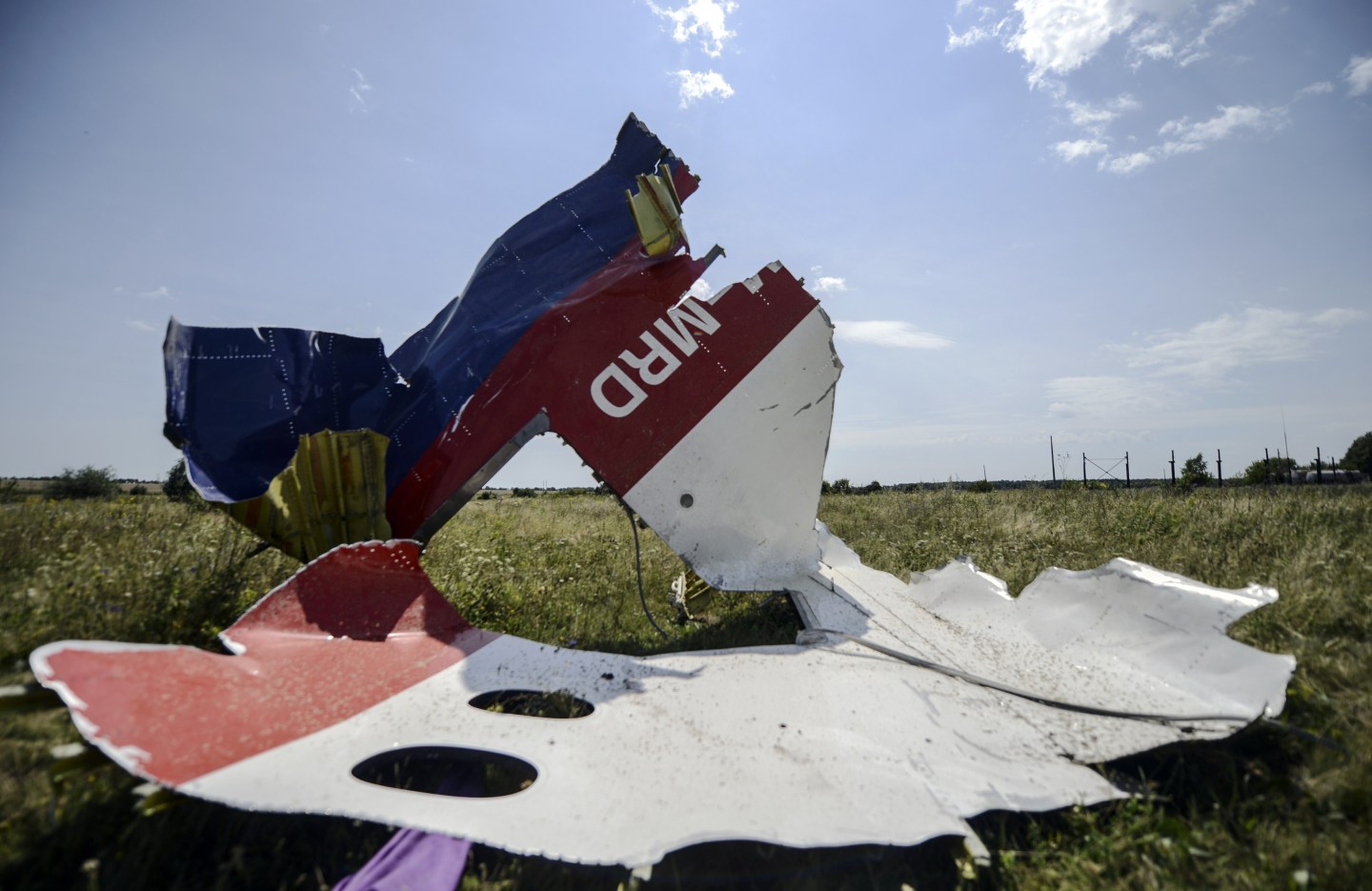 A picture shows a piece of debris of the fuselage at the crash site of the Malaysia Airlines Flight MH17 near the village of Hrabove (Grabovo), some 80km east of Donetsk, on July 25, 2014. Ukraine sought on July 25 to avoid a political crisis after the shock resignation of its prime minister, as fighting between the army and rebels close to the Malaysian airliner crash site claimed over a dozen more lives. The Netherlands and Australia, the two countries that lost the most citizens when the Malaysia Airlines Boeing 777 was shot down, are seeking a mandate to deploy troops on the ground, possibly through a United Nations Security Council resolution. AFP PHOTO/ BULENT KILIC (Photo credit should read BULENT KILIC/AFP/Getty Images)
BULENT KILIC/AFP--Getty Images

The European Union agreed new sanctions against Russia, but said it would wait a few days to see whether a ceasefire in eastern Ukraine holds before publishing them and putting them into effect.

The move reflects the anxiety in European capitals about taking further measures to punish Russia for stoking unrest at a time when Europe’s own economy is suffering from Russian counter-sanctions on the E.U.’s food industry, and from a more general collapse in confidence due to the conflict.

Concerns against fresh sanctions, which draft documents suggest will again target Russia’s state-owned banks and oil companies, were raised in particular by Finland, Cyprus and Slovakia. These countries that all have extensive trade with Russia, and Finnish companies in particular have been hit by Russia’s food ban.

“Finland in general isn’t of the opinion that the right time [for the sanctions] is right now,” Finnish Prime Minister Alexander Stubb told reporters Monday.

Russian Prime Minister Dmitry Medvedev Monday had threatened an “asymmetrical” response if the E.U. imposed new sanctions, threatening, amongst other things to stop European airlines from flying over Russia on their routes to Asia.

The E.U.’s measures “will leave time for an assessment of the implementation of the cease-fire agreement and the peace plan,” E.U. council head Hermann Van Rompuy said after a meeting Monday. He added that the new measures could be reviewed “in whole or in part,” depending on the peace process in Ukraine.

That peace was looking shaky again Tuesday. Ukrainian officials said four of its servicemen had been killed and 29 injured since the ceasefire came into effect on Friday evening. The Defense Ministry claimed on its Facebook page late Monday that rebels had continued to launch rocket artillery strikes on Donetsk airport, and fire on its checkpoints in a handful of locations. Reuters reported that rebel shelling had also killed at least one civilian on Sunday evening outside the government-held city of Mariupol.

At the same time, however, the two sides did manage to exchange nearly 2,000 prisoners, a key point in the ceasefire agreement.

Elsewhere Tuesday, the Dutch Safety Board released a preliminary report into the most controversial incident of the conflict to date–the destruction of airliner MH17 over eastern Ukraine in July with the loss of 298 lives.

The report said damage to the plane “was consistent with the damage that would be expected from a large number of high-energy objects that penetrated the aircraft from outside.” Although the report more or less confirms that the plane was indeed shot down, it doesn’t make any attempt to pin responsibility for the incident on either side.

Moscow and the rebels claim that a Ukrainian fighter jet shot MH17 down, but western governments have blamed the rebels for bringing it down with a sophisticated BUK anti-aircraft missile, made in and supplied by Russia.

In a statement, Malaysia’s prime minister Najib Razak said that the report “leads to the strong suspicion that a surface-to-air missile brought MH17 down, but further investigative work is needed before we can be certain.”