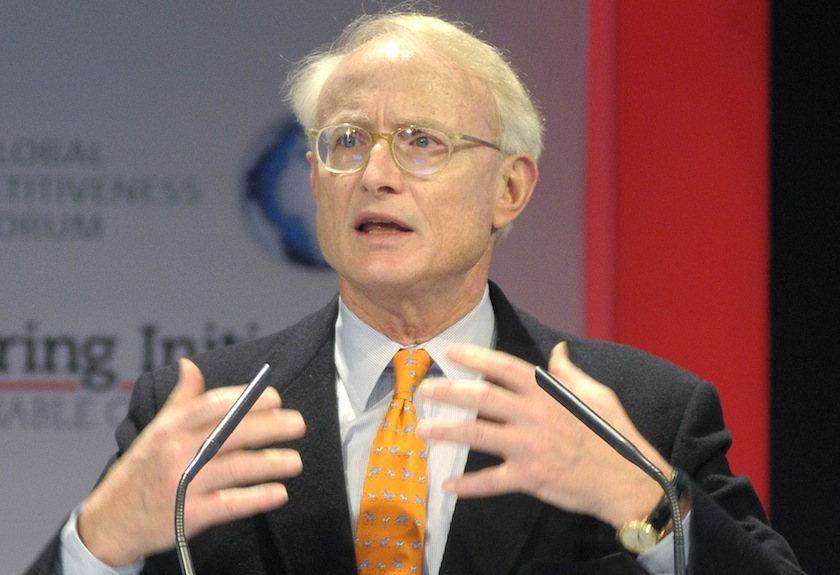 While the American economy is adding jobs at a faster pace than at any point since the end of the financial crisis and is growing faster than many of its developed peers, it’s still not close to full strength.

Harvard Business School’s 2013-2014 survey on competitiveness queried thousands of Harvard alumni to get a sense of what business leaders feel is holding the economy back, and the findings were released Monday. Fortune spoke with Michael Porter, professor and lead researcher on the competitiveness survey, about the survey’s findings. The interview has been edited for length and clarity.

Fortune: Can you summarize the findings of this year’s survey?

Michael Porter: The big message here is that if the economy is going to grow and thrive in the long run, you have to be competitive. We define competitiveness as consisting of two things: You have to provide an environment in which firms operating in the U.S. can win in the marketplace, but at the same time we have to do that in a way that allows income and the standard of living of the average citizen to go up. Fundamentally, competitiveness depends on doing those things together. If you’re doing one but not the other, it’s unsustainable.

Small business is declining as a force for job creation in America, and we’re seeing less new business formation in the economy. And I think the reason for this is that small businesses are disproportionately affected by high regulatory costs, legal costs, a deteriorating infrastructure, and high corporate taxes.

The report shows that business leaders are concerned about the tax code, infrastructure, and worker skills in America: all problems that require political solutions. Does the business community have a plan to address these issues amid political gridlock?

Corporate taxes are probably the single biggest issue [in which] a policy change could make an immediate and substantial difference in the trajectory of the economy. It’s partly the corporate tax rate itself, which is the highest in the OECD, but also this issue of repatriation, where we have so much capital stuck abroad because of the international tax regime we have. Businesses are ready to do a deal where you bring down the corporate tax rate to something reasonable in the mid twenties and you eliminate virtually all or most deductions in a revenue-neutral way.

The business community isn’t holding out for lower taxes overall. They just want a more rational tax code that provides certainty and makes it easier to invest in the U.S. rather than elsewhere. Unfortunately, the political will isn’t there.

Is there anything the business community can do to help end this gridlock in Washington?

The business community is very wary of entering the political fray right now. The business leaders I talk to are tired of Washington. They see more downside than upside when it comes to speaking out and then getting criticized, so business kind of has a bunker mentality. But business right now isn’t presenting a very organized and forceful advocacy of the sort of policies we need and outline in this report, and that’s unfortunate. We believe that business must deal with some of these issues themselves as businesses, rather than waiting for government. But, ultimately, government has to make some big changes too, and how to mobilize business in that process is something we’re struggling with.

Your report raises the issue of the so-called “skills gap” in the American labor market. We hear from business leaders that American workers don’t have necessary skills, yet businesses also seem unwilling to raise wages or provide much training in order to encourage workers to build those skills. What’s going on here?

The stunning and disappointing [finding] from this survey was that businesses will go to great lengths to avoid hiring full-time people. They’d rather outsource, they’d rather use automation, and the first question is “why?” I think the answer to that is the same structural competitiveness issues that we’ve been talking about: high corporate taxes, high regulatory and compliance costs, and high healthcare costs.

And there is also a perception of this skills gap, but the discussion about this skills gap has been too abstract. In fact, the skills businesses need are very specific to region and industry. There’s not one big labor market, but many different micro markets for skills all across the country. The problem is that businesses don’t communicate their needs very well, so young people don’t know what skills they need to succeed. Companies haven’t been doing a good job of workforce planning and communicating their needs, and business has been a passive player in the market for skills.

It seems like larger businesses are thriving and are much more optimistic than small businesses when it comes to competitiveness in the U.S. Is this a new phenomenon?

This is a relatively new finding since this is the first year we grouped respondents by the size of the company they worked for. What we found is the smallest businesses were much more pessimistic about the business environment than larger firms.

So, why would this be? Our narrative here is that the U.S. for years been the most competitive economy on earth, with great infrastructure, an educated workforce, and a strong middle class. As our relative strengths in these areas have begun to disappear, it’s small businesses that are the canary in the coal mine, because large businesses have the ability to look overseas for better opportunities. This divergence between the fates of large and small business is just one more sign that relative competitiveness in the U.S. is declining.

Many of the solutions the report suggests, like improvements to the education system and infrastructure, will require investment from both the private and public sector. Are business leaders willing to support these investments?

Businesses are investing quite a bit, just not in the United States. I think the appetite will return if we start to see some signs of progress on budget and tax reform. I think that would be decisive. I think a lot of business leaders are holding back because there’s not a lot of confidence in the future. I think there’s a fatalistic idea that nothing’s going to change, and so incrementally, if we want to invest, let’s do it overseas where we don’t have these problems and growth is stronger.

That said, there are some tailwinds out there, like the recent boom in domestic energy production. U.S.-based businesses will see huge cost benefits because of this trend, which, by the way, was set in motion because of American technology and innovation.

There’s also a tailwind as a result of rising labor costs abroad; in China, for example. So, we have the opportunity to be more cost-competitive because of these trends. I think if we can start to see some headway on these critical policy questions, we’d see businesses [become] more willing to invest and support investment from the public sector.