Ukraine, rebels sign ceasefire but relief is damped by mistrust 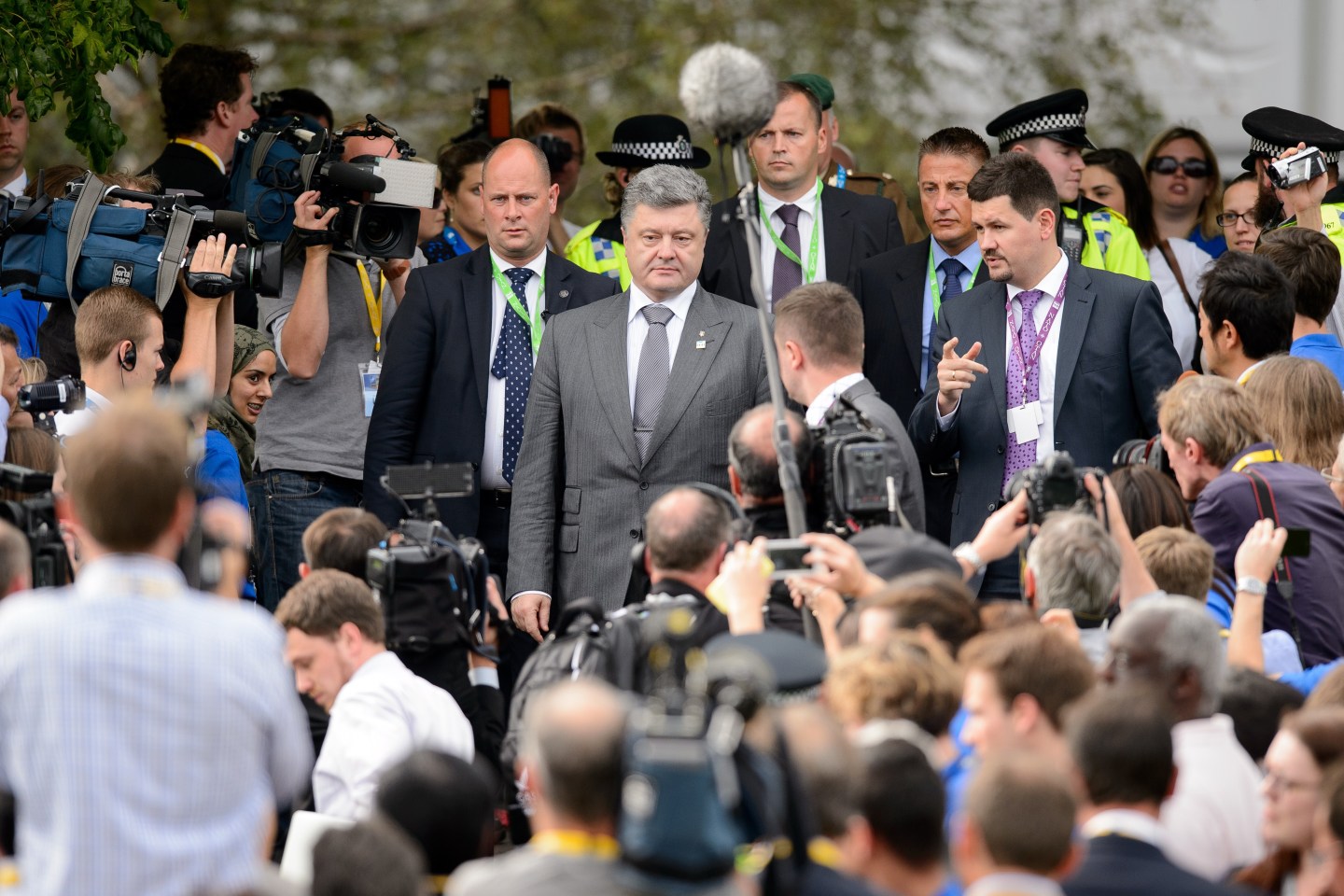 Ukrainian President Petro Poroshenko (C) arrives to address the media on the second day of the 2014 NATO Summit at the Celtic Manor Resort in Newport, South Wales, on September 5, 2014. Ukraine and pro-Russian rebels signed a ceasefire Friday in their five month conflict, which has plunged relations between Russia and the West into their worst crisis since the Cold War. AFP PHOTO / LEON NEAL (Photo credit should read LEON NEAL/AFP/Getty Images)
LEON NEAL/AFP--Getty Images

Ukraine and pro-Russian rebels agreed a ceasefire on Friday, in what may be a first step towards ending a conflict that has caused the biggest crisis in relations between Russia and the West since the end of the Cold War.

Parties representing the two sides at peace talks in Minsk, the capital of Belarus, said the ceasefire would come into effect at 18h local time Friday (0900 EDT).

That was also confirmed by Ukrainian President Petro Poroshenko, who was attending a NATO summit in Wales.

But there were signs that the ceasefire was at best a temporary relief and not a long-term solution to the crisis. The government in Kyiv has said it won’t accept any long-term deal that involves giving up the regions of Donetsk and Luhansk–or, for that matter, the region of Crimea, which Russia annexed in March.

Reuters, meanwhile, cited rebel leader Igor Plotnitsky as telling reporters that: “The ceasefire does not mean the end of (our) policy to split” from Ukraine.

The terms of the deal weren’t immediately clear, but are likely to have been based on a seven-point plan proposed by Russian President Vladimir Putin earlier in the week. Putin’s plan involved a ban on military flights over the disputed regions, and the removal of Ukrainian artillery from positions where it could threaten civilian areas like the cities of Donetsk and Luhansk. It also called for a full exchange of prisoners, the creation of safe corridors for humanitarian aid and international monitoring of the Russian-Ukrainian border.

However, the news came too late to stop the E.U. announcing fresh sanctions against Russia for its support of the rebels. U.K. Foreign Secretary Philip Hammond told the BBC that new measures that have been in the works for the last week would be applied as planned.

“If there is a ceasefire, if it is signed and if it is then implemented, we can then look at lifting sanctions,” Hammond said.

French President Francois Hollande, meanwhile, said he would take a final decision on whether to deliver the first of two modern assault ships to Russia only in October.

At the summit, NATO leaders had earlier approved, as expected, the establishment of a rapid reaction force with a view to having a near-permanent presence of NATO troops in the central and eastern European countries that joined it after breaking out of Russia’s orbit in the 1990s.

Moscow’s reaction to NATO’s made it clear that there would be no quick return to normal for relations with the West, ceasefire or no.

“The nature and tone of the statements on the situation around Ukraine…will inevitably increase tensions, jeopardize the progress that has been made in the peace process in Ukraine and contribute to deepen divisions in Ukrainian society,” the Russian Foreign Ministry said in a statement. It also complained that NATO was showing “unconditional support” for “neo-fascist and extremist forces” on the Ukrainian side.

It was clear on Friday that intense fighting had carried on almost until the declaration of the ceasefire, mainly around the government-held port city of Mariupol, the second-largest city in the Donetsk region and a key staging post on the land route to Crimea.

There was also disturbing news from elsewhere, as Estonia’s Security Police reported that one of its officials had been abducted by men entering the country from Russia. Tensions between those two countries have also run high in the last 10 years, with Estonia becoming a member both of the E.U. and NATO, to the annoyance of Moscow.

European financial markets reacted only guardedly to the news but finished close to the day’s highs on hopes that further damage to the European economy can now be avoided. The Russian stock market was more enthusiastic, ending up 1.2% on the day.