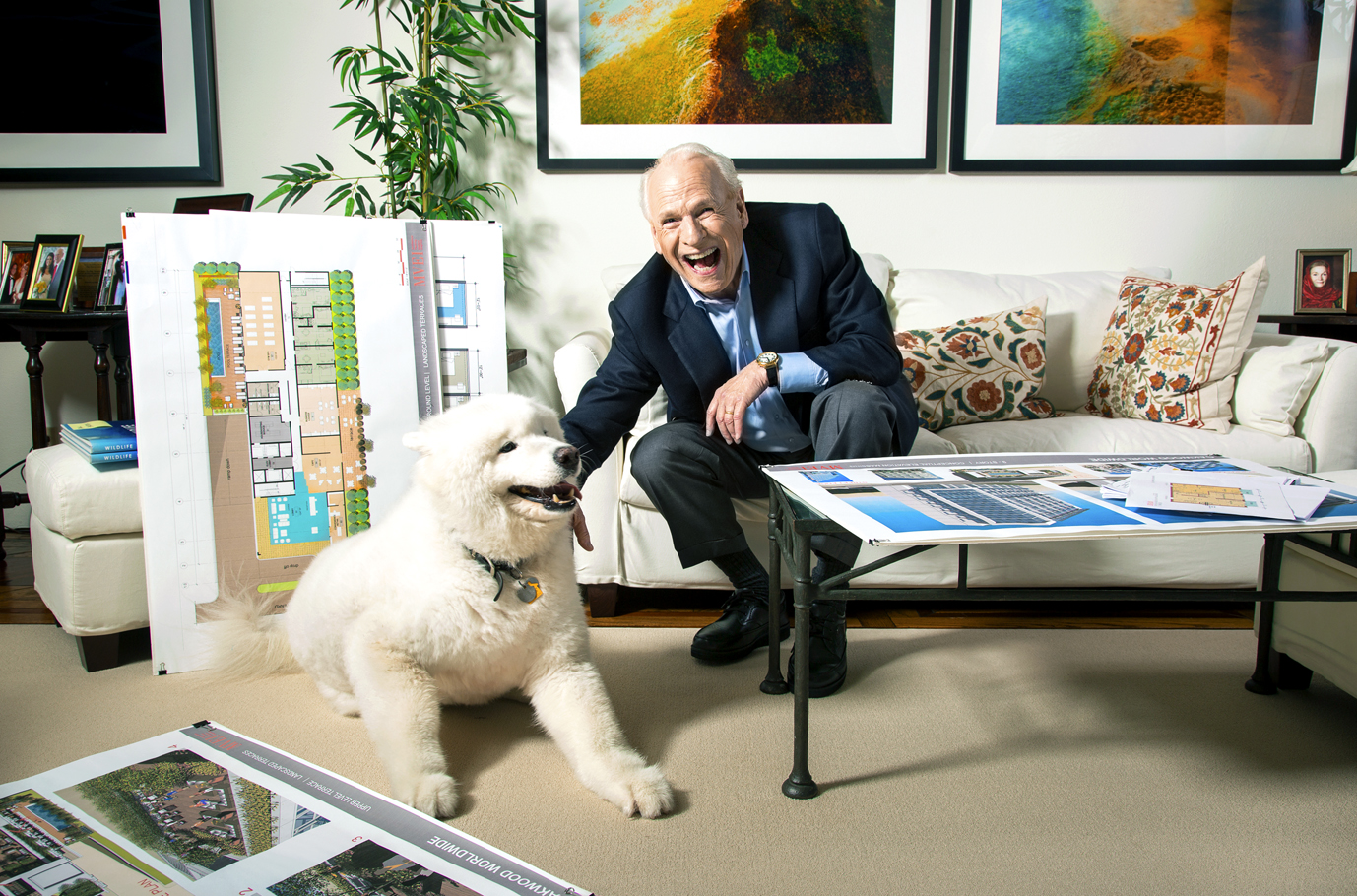 Searching for a gimmick after his singles-oriented California apartment complexes cooled during the 1970s, Howard Ruby conceived a completely new category: corporate housing, where companies lease apartments for extended periods for employees who are relocating or working on projects. Ruby began his business career at 5 with a lemonade stand. Today he’s 79 and still CEO of Oakwood Worldwide, the world’s largest corporate-housing provider, with locations in 50 states and 86 countries. Despite an eye disease, he travels with his wife, actress Yvette Mimieux, taking photographs of endangered wildlife and locations, which are often used to educate youth about climate change. Not bad for a Depression-era kid whose private company now generates annual revenues of $600 million.

I grew up in Cleveland, at the end of its industrial heyday, and visualized myself doing things others weren’t. I was an entrepreneur from the age of 5—running lemonade stands, delivering the newspaper, and cutting lawns—and then I worked hard to go to the Wharton School of Business. Conscription was in force then, so after college I joined the Navy and was the supply officer on a destroyer that went to the Far East and traveled the world. That exposure influenced the rest of my life.

Two months after I left the Navy, I started a real estate partnership with Bob Franks in California called R&B Enterprises. In 1960 we merged with a development company started by my brother Ken and Ed Broida, and became R&B Realty Group. The four of us each put $500 in the kitty and went on short rations, praying for a deal to happen soon; 45 days later we got our first deal.

Back in the ’60s, people were coming to California for the space program and the military, while the war built up in Vietnam. People wanted a place to meet others, so in 1965 we launched an apartment complex in Torrance called the South Bay Club. Our slogan was “Live where the fun is.” It was the first furnished apartments for singles, and was so successful that we went on to build thousands of units in other properties.

We were just out of college and in our mid-twenties. We were building 150- and 250-unit buildings that required large amounts of capital. Today there’s an organized venture capital industry. But back then it wasn’t as easy to find investment capital. My partners and I grew mustaches to make ourselves look older and started out making presentations to groups in bridge and canasta clubs. There were a great many women who invested $5,000 to $10,000 apiece in those days. Five years later, after we were established, we’d go to the banks and insurance companies, and got huge investments from them.

By 1970 the country was getting more serious with the Vietnam War, and there weren’t as many engineers coming out to California for the space program. We had to find another audience because we had all these furnished apartments.

We decided to try working with corporations. We changed from doing just furnished apartments to providing totally furnished apartments with household items and housekeeping. We got publicity because corporate housing was a new concept, and expanded beyond California to business centers like Texas and the District of Columbia, where there were more jobs being created. It was an instant success. Many Fortune 500 companies immediately had us take care of their needs.

Some companies wanted temporary housing for interns with a college-dorm look. Others wanted deluxe housing for vice presidents who were relocating. We couldn’t fill all the needs, so we came up with the idea of renting additional apartments from others so we could customize offerings for the various corporations.

What makes it a good business is the breadth of opportunity. Companies have needs all over the world. Typically corporations buy temporary housing in bulk, and we have many long-term contracts. About 75% to 80% of our business is with big corporations, and 20% to 25% is with individuals who want a homey place to stay, rather than an expensive hotel, for a month while visiting family or moving to a new city.

In the late ’80s, we formed a new company, Oakwood Corporate Housing, to run our corporate housing operations. We continued property management under the name R&B Realty Group, but the buildings were branded Oakwood. I used to be a caddie when I was 12 or 13, at a place called the Oakwood Country Club. The place seemed like the most deluxe thing I’d ever seen in my life. So I liked the name Oakwood.

Eventually we grew to 58 offices throughout the U.S. We added property companies that had small units to our supplier network. In 1994, Oakwood Worldwide became the first national network of third-party corporate housing. Today we have more than 970 in that network in the U.S., and more than 1,100 outside the country. Abroad we started with buildings in London, Brussels, and Frankfurt, and Japan was our first target in Asia.

Challenges came along the way. If the marketplace was down, and corporations were down, we’d shrink our workforce, take the furniture out to warehouses, and rent the units as unfurnished apartments.

The two biggest things in the last 15 years that affected our business were technology and globalization. We watched when Jack Welch went to India and started the first major U.S. call center there. Many people expanded overseas. They asked if we’d go over there, and we expanded to Korea, China, India, and the Philippines.

“I keep working because that’s who I am. I’m among the last of the Depression kids. Business helps keep me alive.”

Eventually we contacted Goldman Sachs (GS) and said we’d like to find a joint venture partner who’d construct buildings, and we’d manage them. This year we selected Mapletree Group, one of the largest developers in Singapore. Through the joint venture, we will develop some $4 billion worth of corporate and serviced apartment assets in Asia, Europe, and North America.

Today we give operational reports and tie into the financial statements of corporations that outsource their temporary housing. We give them peace of mind, particularly overseas, with security. We can tell a company where all its people are, whether there’s a tornado, or a war overseas. That’s part of the quality we offer. It’s not just about whether you clean the apartment well.

In addition to Oakwood, photography is a passion of mine. A few years ago I was diagnosed with retinitis pigmentosa, a disease most people know as tunnel vision. I didn’t realize I had it until I was 65, and it inspired me to capture as much of our world as possible through the lens of my camera.

The disease was mild at first, then got more serious. I can’t ski, golf, or fly-fish anymore. I have a machine that blows up documents so I can read them. Each day my eyes see differently, and the machine adjusts things so I can see and read. I typically see things in yellow-green, or purple on some days. I have someone who goes on business trips with me. You make do.

Twelve years ago I went to northern Canada and saw the plight of polar bears, who are starving because they can’t feed where the ice is melting. I partnered with the National Wildlife Federation and set up Climateclassroomkids.org, with lesson plans about the changing environment around the world. Pictures of wildlife from my travels hang in Oakwood apartments, which has sparked interest from our guests. Businesses have the biggest impact on the environment, and have the money to do something about it in a bigger way than the average family.

I keep working because that’s who I am. I’m among the last of the Depression kids. Business helps keep me alive. People who retire don’t tend to live as long. Everybody has medical issues as they age. Some have it a lot worse than I do. There’s going to be a lot of people who work long after age 65 in the coming years, and it’ll be the best thing they could do for themselves.

MyAdvice: Howard Ruby
Founder, chairman, and CEO of Oakwood Worldwide
HAVE FOUR EYES THAT GO AROUND YOUR HEAD Look out for the competition at every turn and observe what’s happening around you. You have to be mindful of changes and where the markets are going.

DON’T JUST ASK WHAT A CUSTOMER WANTS Ask why he wants something. If you go deep into that question, you can add your own vision to make things better.

DON’T RIDE THE CREST OF A WAVE IN PARTICULAR INDUSTRIES. We had more than 3,000 units in Houston in the early ’80s when the price of oil dropped from $40 a barrel to $8.50. The local economy crashed because it depended on the energy industry—and we went down with it. So spread your risk.