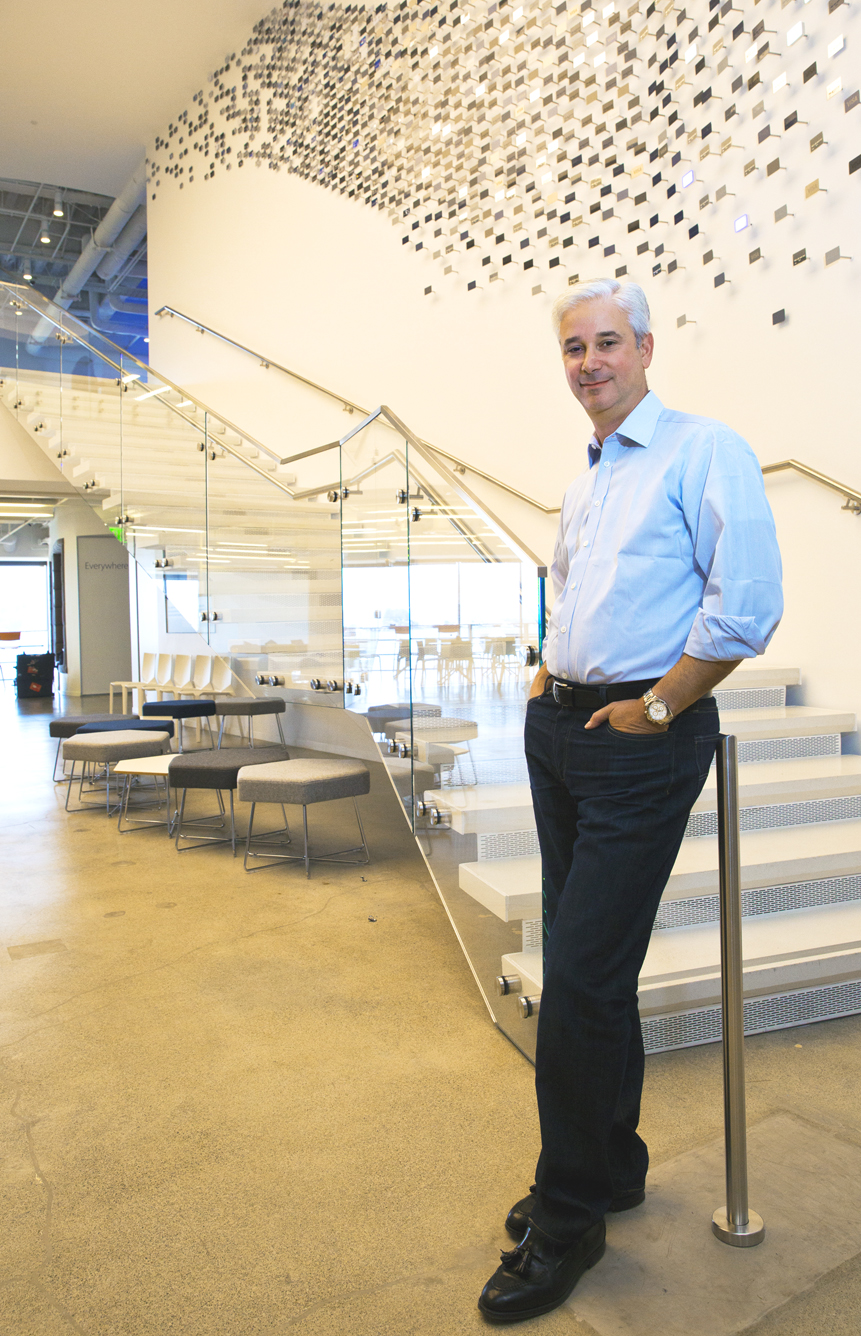 When J.P. Morgan Chase (JPM) was preparing to launch mobile check depositing in 2010, Charles Scharf, who was running its retail-banking unit, paid an unusual personal visit to Mitek Systems, maker of the mobile-capture technology used by Chase. He wanted to see for himself how the tech would work.

It’s an example of Scharf’s hands-on approach. A 27-year banking veteran, Scharf, now 49, has been CFO of Citigroup’s(C) investment bank and held roles at Bank One before it merged with Chase, where he stayed for eight years. He took the CEO job at Visa (V) in November 2012, a no-surprise hire considering how close they are: more than 80% of Chase’s credit cards are Visa, making the bank the brand’s biggest issuer.

Now Scharf is earning praise from analysts and insiders for breaking with tradition. He has made Visa, No. 238 on the Fortune 500 with $11.8 billion in revenue, more open to merchants and tech innovation. He oversees a network with 2.2 billion cards accepted by 36 million merchants globally. And he has done it with little flash: He mostly avoids press; sources describe him as “all-business.”

One year before Scharf took the reins, Dodd-Frank’s Durbin Amendment of 2011 took effect, throwing payment giants and their big-bank clients for a loop. It limited debit card swipe fees, leaving merchants happier but frustrating the banks. J.P. Morgan analyst Tien-Tsin Huang says that Scharf “navigated Durbin very well. He has a tough job. He has to manage the relationships with large issuing banks, but he also needs to work with small innovators.”

Scharf catered to both at once. He brokered a new 10-year deal with Chase to launch Chase Merchant Services, which runs on Visa’s payment network and will lead to unique offers for merchants. The deal means increased volume of Chase credit and debit cards for Visa (which cuts into ­MasterCard’s share). Meanwhile, he visited startup CEOs in Silicon Valley to invite open collaboration. He launched Visa Digital Solutions, which provides APIs that allow outside developers access to Visa’s network as an effort to push global innovation in the industry. In July Visa released Checkout, a revamped digital wallet, making mobile purchases more seamless.

On the hiring side, he quickly promoted Sam Shrauger, a former PayPal exec, to global head of digital. Shrauger tells Fortune that Visa, under Scharf, is a “faster” company than ever before. Scharf also brought in Ryan McInerney (No. 15 on Fortune’s 40 Under 40 in 2013) from Chase, where he was CEO of consumer banking, to be Visa’s president.

Abroad, Scharf is overseeing a new tech development center in India, scheduled for 2015, and Visa will create 2,000 new tech jobs globally. He has pushed partnerships with mobile network operators like Vodafone (VOD) in the U.K. and Telenor in Pakistan, giving customers the ability to link Visa accounts to their phones. (It is important to note that Visa Europe is a separate company, which means making Visa more global is a particularly thorny task. Because the Europe business is separate, rival MasterCard is typically considered more globally integrated, but Visa’s 2013 global payment volume, the metric most indicative of market share, was $4.38 trillion to MasterCard’s (MA) $3 trillion.)

“Visa has an excellent reputation in the market, but historically has been seen as difficult for merchants to work with,” says Evercore analyst David Togut. Since Scharf became CEO, he has eliminated 50% of Visa’s hefty rulebook for merchants. He keeps the original, a 1,538-page doorstop, in his office as a reminder. “He recognizes that the payments world is becoming more competitive,” says Togut, “and he needs to open the tent and invite everyone in—merchants, disrupters, and banks. He wants to make Visa a more global brand, particularly in emerging markets. Visa is easier to do business with under Charlie Scharf.”

Indeed, Scharf tells Fortune it’s a new day at Visa: “It was a foreign concept inside the company to treat merchants as an equal customer to the issuers,” he says. It seems the market is banking on his moves—in the nearly two years since Scharf joined as CEO, Visa’s stock has grown by 51%.

A shorter version of this story ran in the September 22, 2014 issue of Fortune.