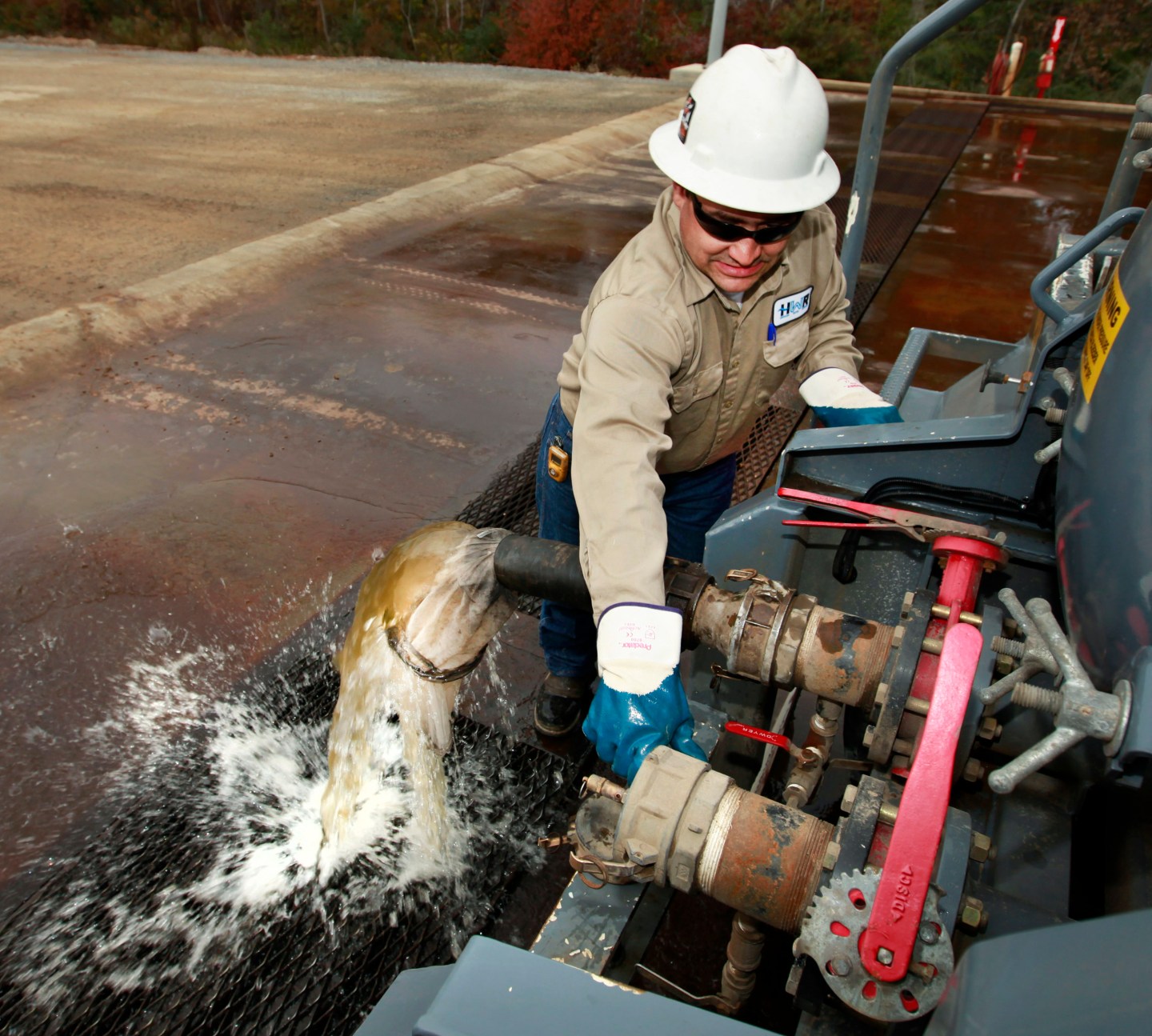 Anthony Schillings opens a valve to unload water from his truck into a Heckmann Water Resources (HWR) treatment plant that separates oil, sediment and water mixed during the hydraulic fracturing process, near Carthage, Texas, U.S., on Friday, Dec. 9, 2011. Water-service companies help manage the chemical-tainted water that's a byproduct of oil and natural gas drilling and production; cleaning and recycling it for re-use, and hauling it away for disposal. Photographer: Jason Janik/Bloomberg via Getty Images
Jason Janik/Bloomberg—Getty Images

Fresh water has always been a big part of fracking operations, but as it expands beyond North America to other parts of the world, researchers say it will increasing be competing for water in places that don’t have much. This could set up difficult choices for countries between drilling for oil and gas or ensuring a fresh supply of H20 to their parched citizens.

A new study by the global research organization World Resources Institute (WRI) found that the best shale deposits where the fracking would be done are in places like China, Mexico and South Africa, locales that are already facing water challenges.

The Washington, D.C., organization released a report Tuesday that found that 38% of shale resources are in areas that are either arid or under high to extremely high levels of water stress; 19% are in areas of high extremely high variability and 17% are in locations exposed to high or extremely high drought severity. The report includes the first maps to illustrate these issues.

“The potential for expansion is huge: known shale gas deposits worldwide add 47% to the global technically recoverable natural gas resources, and underground stores of tight oil add 11% to the world’s technically recoverable oil,” the report said. “But as countries escalate their shale exploration, limited availability of freshwater could become a stumbling block.”

Ever since fracking took off in the United States in places like Pennsylvania, Texas and Ohio, the industry has been dogged by concerns about the amount of fresh water. The hydraulic fluids pumped into the ground to unlock vast amounts of oil and gas from the shale rock contain as much as 99% water, according to the Environmental Protection Agency, and a single well can use anywhere from 50,000 to 350,000 gallons of water.

A report on the issue in February from Ceres, an nonprofit organization mobilizing business and investor leadership on climate change, water scarcity and other sustainability challenges, found that 97 billion gallons of water were used from 2011 to 2013, half of it in Texas, followed by Pennsylvania, Oklahoma, Arkansas, Colorado and North Dakota.

The industry argues that its overall water use is small and trails other sectors like agriculture. It also contends that companies are doing more to recycle water and introduce technologies that cut down on water in the process. Apache, for example, is recycling 100% of produced water in the Permian Basin, according to the Ceres report. Anadarko and Shell are buying effluent water from local municipalities. Chesapeake is reusing nearly 100% of its produced water and drilling wastewater in the Marcellus region.

“I got the sense the industry is investing heavily in solutions to mitigate their demand they feel fairly confident the technology exist,” said Paul Reig, lead author on the WRI report. “My point to them is that we should hear more about that. Stakeholders should feel more confident in the practices they are trying to move forward.”

While water scarcity is an issue in the United States, it’s even more pressing around the world—and will only get worse. A report on fracking and water from the Stockholm International Water Institute (SIWI) this month estimated that the global footprint of groundwater use estimated at 3.5 times the actual aquifer, leaving an estimated 1.7 billion people living in areas where groundwater is under threat.

“We live in times where demand for water from multiple uses (drinking water, agriculture/food production, energy generation, various industrial purposes etc.) is increasing,” one of the report’s authors Andreas Lindström wrote in an email to Fortune. “These pressures are naturally felt most in areas where water is already scarce and shale gas resources are often found in dry areas prone to these water challenges. It can then be expected that large scale fracking operations will constitute a new prominent competitor for scarce water resources in certain areas adding to existing pressures.”

Neither the WRI nor the SIWI report called for a ban out fracking due to water shortages. But they both said companies need to factor water scarcity into their decision making when considering new drill sites and work closely with governments to disclose more clearly how much water they will use.

“This report and the data we are sharing is definitely going to inform governments that might decide to ban hydraulic fracturing because of already high levels of competition for water in a specific region,” Reig said. “But in other regions, you know, development of shale gas could be seen as a stepping stone to cleaner energy in the long run. At the WRI, we want to be realistic about the fact there is a large volume of this type of resource out there.”