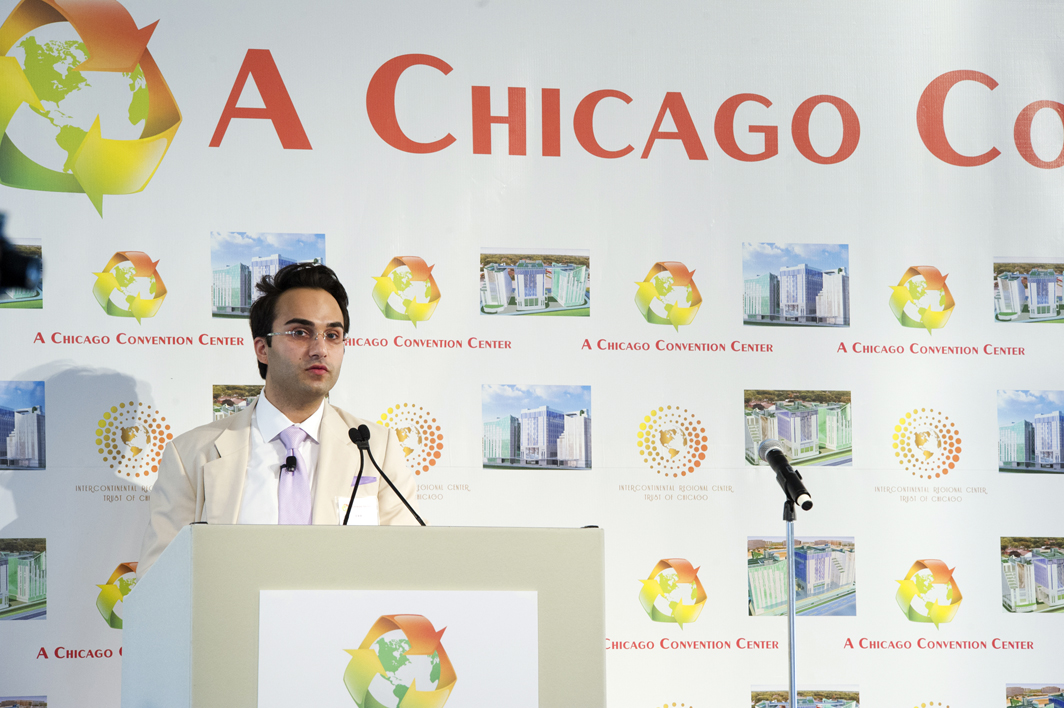 A federal grand jury this afternoon brought criminal charges against Anshoo Sethi, the 30-year-old Chicago man whose audacious scheme to build a giant hotel and convention complex with $160 million he raised from Chinese investors was the subject of a recent Fortune investigation.

The indictment charges Sethi with eight counts of wire fraud and two counts of making false statements. If convicted, he faces a maximum sentence of 20 years on each fraud count, and ten more years on the false-statement charges.

Sethi, who previously reached a consent agreement with the Securities and Exchange Commission without acknowledging or denying culpability, raised the funds from Chinese investors seeking U.S. residency through the booming EB-5 visa program, which allows foreigners who invest at least $500,000 in American businesses to jump to the front of immigration line.

Claiming to be building a $912-million, “Zero-Carbon Platinum LEED-certified” complex featuring five name-brand hotels on a 2.8-acre tract near O’Hare Airport, Sethi signed up nearly 300 wealthy investors. But he raised the money, the indictment charged, with a combination of outlandish lies and forged documents about the project’s government financing and permits, the commitments he had from hotel chains, and his own development experience.

In truth, as Fortune reported, Sethi’s only experience in the lodging business was running his family’s shabby motel into the ground.

The SEC’s civil fraud action, filed in February 2013, brought the scheme to a halt and ultimately recovered about $147 million in investor funds, which had been held in escrow. In a settlement last March, Sethi and his business entities were fined $3.9 million and he was barred from any association with the sale of securities for 20 years.

In addition to prison time and fines, today’s indictment (as the SEC settlement did) seeks the recovery of an additional $11 million in administrative fees—$41,500 per investor—that Sethi collected. The money, which Sethi told investors was fully refundable if their visas were not approved, was supposed to be used solely for project expenses.

According to the indictment, Sethi spent “nearly all” the money—and “misappropriated” at least $320,000 of the fees “for the purchase of luxury goods for himself, family, and friends,” to make a payment on an unrelated lawsuit settlement, and “to fund a cosmetic surgery business.”

The SEC investigation began with a tip filed through the agency’s website that generated a record $14.7-million whistleblower award.

Sethi’s lawyers provided a written statement noting that their client “worked nearly ten years” on the convention center project and that his family invested “millions of dollars in it.” The lawyers state that “the indictment ignores the key fact that, from the beginning, Mr. Sethi ensured that every penny of the wealthy foreign investors’ principal was always safely secured in an escrow account, and that each investor already has received 100% of their principal investment back. What remains to be returned to investors are the administrative fees that were paid with the understanding that they would be used to pay expenses associated with the investment. In his resolution of the SEC action in March 2014, Mr. Sethi already committed to repaying all those fees and is making substantial strides to accomplish that goal.” The statement asserts “the evidence will show that this project was real and that, while Mr. Sethi made serious mistakes in judgment, he was grossly ill-served by certain of the so-called ‘EB-5 experts’ and advisors that he engaged” and that “there were individuals who used the project to pursue their own private interests to the detriment of Mr. Sethi and the investors. Unfortunately, today’s indictment has oversimplified the story of what transpired. Mr. Sethi now looks forward to his opportunity to present the complete picture.”