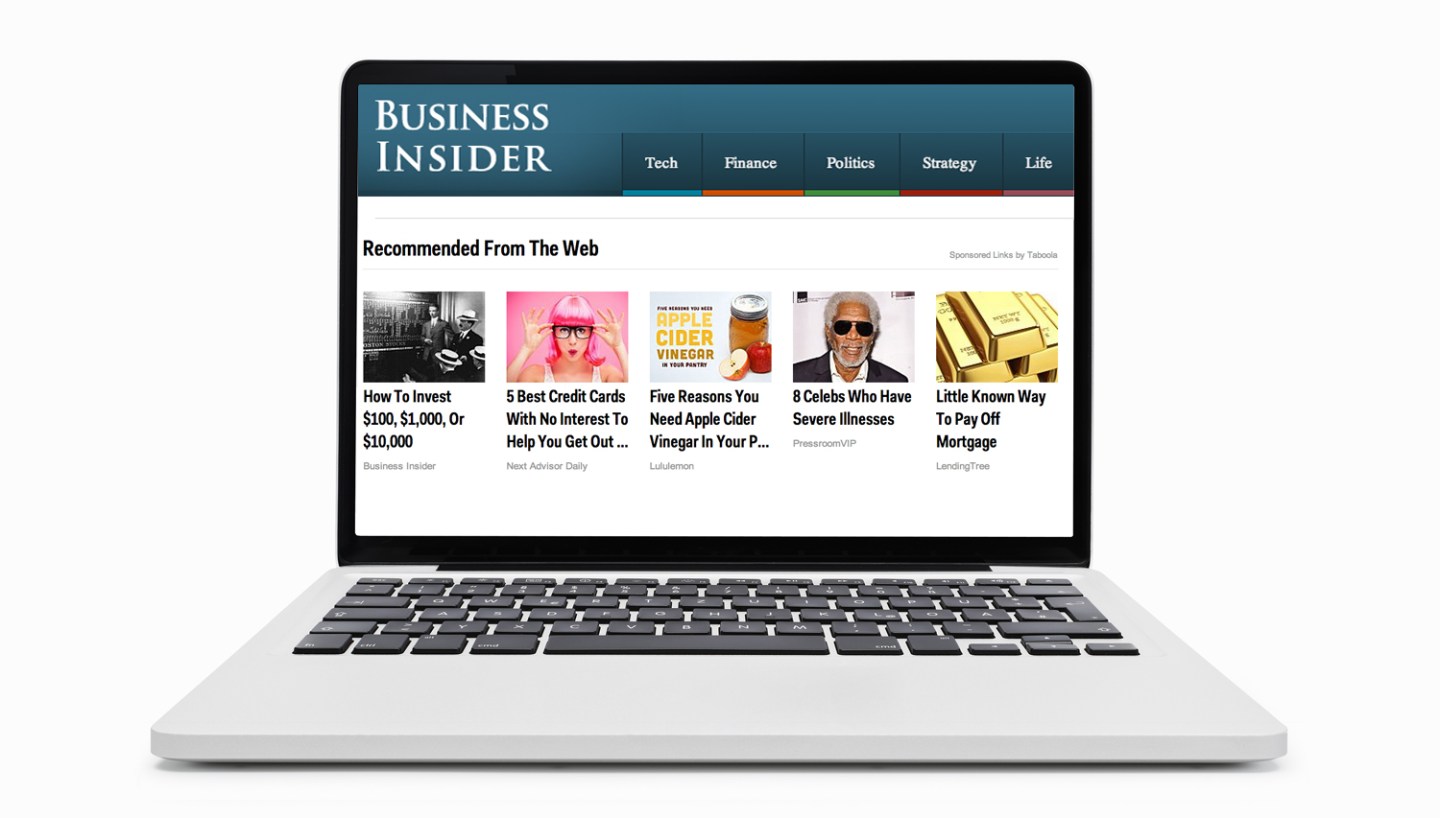 Outbrain and Taboola’s founders set out to make the Internet a better place. So why does everyone seem to hate their products?

Outbrain is Yaron Galai’s fourth company, but it’s the one he wanted to build all along. He has sought to make money, and help publishers do the same, by recommending their content to online readers. With his other three digital advertising companies, which had successful exits, he got distracted by banner ads and other common forms of online advertising. With Outbrain, it’s different. This time he kept focus, he told me in 2012, avoiding the “highly optimized crap” of banner ads.

It worked. Outbrain-style content recommendation widgets are now ubiquitous on the Web. Since 2006, the New York-based company has grown to 400 employees with $99 million in venture backing. Outbrain makes 180 billion recommendations each month to an audience of 550 million people. The company wouldn’t disclose revenue, but reports of a rumored IPO have circulated for the past year.

The purpose driving Taboola, a rival content recommendation startup, is similar. Adam Singolda started the company in 2007 with the goal of providing the best recommendations, or the reverse of Google search results, he likes to say. Taboola sought to show people things they didn’t know they were looking for and “make every piece of information you could find on a search engine [find] you at the right time,” he said.

Taboola has quickly gained on Outbrain’s early lead in the market. It now reaches 400 million monthly unique visitors and serves 1.5 billion recommendations each day. After a recent acquisition, Taboola reported a revenue run rate of $250 million.

Prominent publishers such as the BBC, USA Today, The Huffington Post, and the Boston Globe use Taboola on their websites. (As has Fortune and other publications owned by Time Inc., it should be noted.) Meanwhile, Outbrain works with CNN, NBC News, ESPN, and Fast Company.

Publishers can earn sizable chunks of revenue from the use of these services. Advertisers (which sometimes include other publishers) who wish to recommend their content can pay to promote links; the revenue gets split with the publishers. The services pay publishers anywhere from hundreds of thousands of dollars to tens of millions of dollars per year. As banner ads fall further out of favor, publishers are eager for any kind of income they can get.

Despite their founders’ best intentions, many believe Outbrain and Taboola have made the Internet worse for the wear. It’s easy to see why. The links in their “related content” widgets, which typically appear at the bottom of a blog post or news article, often represent the worst of the Web.

Last year, the digital media publication Digiday declared that “content marketing has a quality problem,” arguing that the new format is worse than the lowly banner ad—it’s spam.

Readers are frustrated by the methods used by many marketers through these widgets, which many view simply as spam. A Twitter search quickly reveals the attitude many now have towards some of these ads. Terms like “spam” and “bait-and-switch” are commonly used to describe them.

The most notable expression of annoyance came from Marc Andreessen, the prominent venture capitalist, who also happens to have invested in digital publications such as Business Insider and PandoDaily. Any serious publishers “should be shot” for using related content links, he wrote, because they degrade the user experience and the advertiser experience. They are a “part of the ‘race to the bottom’ pervading Internet content,” he added, noting that the income they bring in is a short-term substitute for building a long-term quality business.

The outcries over Outbrain and Taboola’s approach to content marketing have intensified in recent months. Investigations by the Better Business Bureau and the UK’s Advertising Standards Authority have been opened. At the behest of the Better Business Bureau, Taboola agreed to make the sponsorship disclosures on its widgets more prominent. After the Advertising Standards Authority criticized Outbrain ads that did not “obviously identify” themselves as ads—a criticism that followed Outbrain’s declaration that it would remove “spammy” content from its network at the expense of 25% of its revenue—the company last month banned a new group of content producers from its platform, with a particular focus on “fake” stories, or ads disguised as content.

One site, the tech startup news site PandoDaily, actually did remove related links from its site after finding their content distasteful. The recommended content in question was a story with “shocking” tips for picking up women, powered by a company called Gravity, which is owned by AOL (AOL). “There’s no amount of money that justifies that crap appearing on our pages,” editorial director Paul Carr wrote. (Disclosure: I previously worked at PandoDaily, though I departed before this decision was made.)

The backlash has put Outbrain and Taboola on the defensive. According to Galai, people don’t understand that free online content costs money to produce. The complaints come from “people that are into ad blocking and think content for free is our birthright,” he told Fortune. “That’s kind of whiny to me.” His goal is to help provide a sustainable, long term business model for digital content.

In that way, Outbrain has succeeded, Galai says. “We serve recommendations and links that are far better than anything else on the page that helps the publisher monetize and support journalism,” he says. “I truly believe that.”

Taboola’s Singolda believes his company is bringing back return on investment in journalism. “An article used to generate an exciting amount of revenue,” he says. “But something is broken now.”

As the companies defend their businesses, their rivalry has intensified. (More competition is on the way, too. Google is reportedly testing a similar content recommendation algorithm.) At one point, Galai posted a photo of himself eating a tabbouleh salad on Facebook with the caption, “Eating Taboola for lunch.”

(He’s not known to mince words. After Taboola publicly revealed its run rate, he managed to swipe at the company and its coverage in a single tweet.)

The companies’ approaches to the quality issue have become points of differentiation between them. Outbrain says it deals with low quality links by weeding them out before they hit its network, preaching the gospel of reader trust. The company’s spokesperson has accused Taboola of hosting links from financial scammers.

Taboola, meanwhile, says its approach is to allow the editors of each site to weed out the bad stuff and give readers the option to down-vote content they don’t like. More than 1.3 million readers have “exed out” content since introducing Taboola Choice in September 2013, Singolda says. “By exing out content, you won’t see it again around the Web. Others benefit from this signal, and Taboola gets a bit smarter,” Singolda says. Likewise, Taboola measures post-click engagement so that if users are dropping off after clicking a certain link, it is determined to be low quality or recommended to the wrong audience. The company has indexed five million pieces of paid content. “The more data we feed into the ecosystem, while giving people choice, and measuring, it will help surface great recommendations you may like and never knew existed out of millions of potential pieces of content,” Singolda says.

With its acquisition of Perfect Market, a programmatic advertising company, Taboola moves toward a more traditional advertising model, recommending products and services in addition to content.

Outbrain’s Galai says the deal demonstrates that his rival is no longer a “true content player.”

“We’re at the fork in the road where the true content players are going to be differentiated from the ad networks and ad-tech that are masquerading as content,” Galai says.

Singolda says content was never his focus. Taboola shows people information they might like, regardless of whether it’s an ad, an article, a social media post, or an app. “The definition of content is minimizing the potential of this category,” he says. “If you limit that to only slideshows and articles by publishers, you’re limiting what people can find and what the publishers can earn from it.”

In the end, though, Outbrain and Taboola may be solving an impossible problem. Popular content isn’t always good content, and an honest picture of what people want online reflects the ugly, honest truth about the world: People have some pretty unsavory desires.

The most popular content on Taboola’s network is typically how-to advice related to finance and fitness, Singolda says, which is another way of saying that people care a lot about money and looks. On Twitter, Outbrain’s Galai admitted that the Web has bad taste in content: “Sadly, what you see is many times what the audience is engaging with the most,” he wrote.

“If it were just me setting the global taste of what’s being served to everyone, it would all be Pulitzer-winning content,” he told me. “I cringe when I see Kardashian content. [But] I know it’s the algorithm working as designed.” The only thing Outbrain can do is improve its targeting, so that audiences that want “15 Good Looking Celebrities who destroyed themselves with plastic surgery” will see it and audiences that don’t, wont. “The Kardashian link should be on a celebrity site, but probably not on the hard news section of CNN,” he said.

The shallow desires of the Internet puts Taboola, Outbrain, and publishers in an awkward place. Their algorithms have been finely tuned to offer up the most relevant and click-worthy content on the Web—the “best,” by all available metrics, even if it equally repels us and compels us to click.