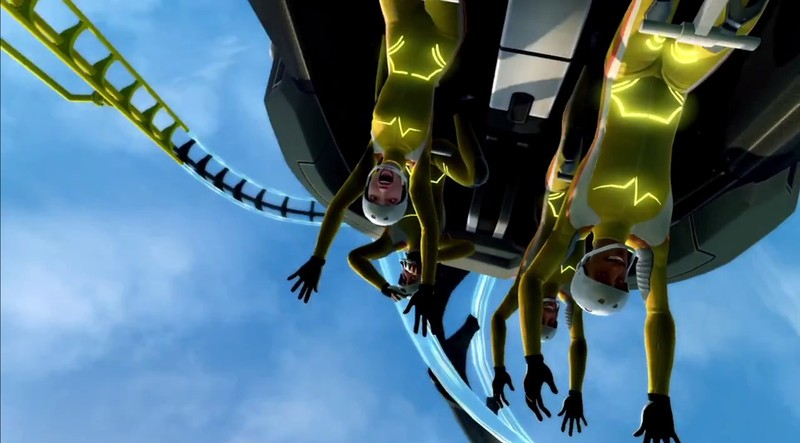 More than 350,000 gamers from across Europe (and some from North America and Asia) have made the annual pilgrimage to the quaint German city of Cologne, which has a population of just over 1 million. Activision (ATVI) used the convention to debut its multiplayer gameplay for Sledgehammer Games’ Call of Duty: Advanced Warfare, allowing attendees hands-on access to the November 3 release.

The global battle for the living room continued in Germany with Sony (SNE) announcing it has sold 10 million PlayStation 4s worldwide. To keep that momentum going, Sony announced a number of exclusive new titles at the show, including the action game Hellblade from developer Ninja Theory, the open world adventure game Wild from Rayman creator Michel Ancel, the shooter Alienation from Housemarque, and Q Games genre-bending The Tomorrow Children. Microsoft announced that Square Enix and Crystal Dynamics Rise of the Tomb Raider, the second game in the rebooted Lara Croft franchise, will be an Xbox exclusive in 2015. Xbox will also be getting another big sequel next year with Halo 5: Guardians.

One of the more unique games announced at Gamescom was Silent Hills, the latest sequel in Konami’s bestselling horror franchise (which has also spawned two films). The world of gaming and movies combine in this new game, which is being developed by Metal Gear Solid V: The Phantom Pain creator Hideo Kojima and Pacific Rim director Guillermo del Toro. The game will star The Walking Dead’s Norman Reedus.

Here are our top picks for games that debuted at Gamescom 2014.

Ubisoft won't leave the huge fan base of current generation gamers out in the cold this fall. Assassin’s Creed Unity, which focuses on the French Revolution, is a next-gen exclusive, but Assassin’s Creed Rogue is set between the events of Assassin’s Creed III and Assassin’s Creed Black Flag. The game takes place during the Seven Years War. Gamers take control of a Templar, which had previously been the franchise's bad guys. Shay is actually a former Assassin who’s out to eradicate the brotherhood for good. Gameplay involves engaging in naval battles at sea off the frozen coasts of Canada and New England, and on-land combat against stealthy assassins. New weapons like a grenade launcher add more punch to this darker, grittier game. Throughout this new adventure, gamers will interact with well-known characters from previous games, like Haytham Kenway from Assassin’s Creed III.

In some ways, Life Is Strange couldn’t be more different than Dontnod Entertainment’s sci-fi action game Remember Me, but in other ways, the episodic adventure game is similar. Both games use Unreal Engine 3 technology to create beautiful worlds to explore. And both titles also feature a strong female protagonist. Set in Arcadia Bay, Oregon, players take control of teenager Max Caulfield and embark on an adventure that will span five interactive episodes.

Along with her friend Chloe, Max is out to uncover the truth behind the mysterious disappearance of fellow student Rachel Amber. With an indie-film feel and an eclectic soundtrack, Life Is Strange stands out from other games by blending the angst of being a teenage girl today with life-and-death situations, and the ability to rewind time. While this gameplay mechanic has been used in many games before, this take on time manipulation feels as unique as the American characters the French developer has created.

Helsinki-based developer Remedy Entertainment has blurred the line between Hollywood and games with previous incarnations Max Payne and Alan Wake. Now the studio is combining next-generation visuals with the tension and drama of scripted television. Set in the university town of Riverport, Quantum Break puts players in control of Jack Joyce and Beth Wilder, a pair of ordinary people who are given the extraordinary power to manipulate time after an accident that creates a time rift. Time will randomly break down during the game, which causes disasters in the environment that pause, stutter, rewind and freeze. Fans of Max Payne’s bullet time will see new strategies emerge with gunfights involving time-amplified combat as the player fights against the Monarch Corporation. In addition to the virtual storyline, the game features custom live action storytelling that’s personalized based on the decisions one makes.

A still from ScreamRide

The developer behind Kinect Disneyland Adventures and Elite: Dangerous is taking the theme park business to the extreme in ScreamRide. The game lets players build outrageous roller coasters, thrill rides and attractions from the ground up and then take them for a test run. The game offers three ways to play: Engineers can construct elaborate rides that test the boundaries of physics and g-forces; Scream Riders get on these rides and experience the thrills and spills first-hand – sometimes resulting in untimely deaths; and Demolition Experts can use any means necessary to tear down an entire amusement park. With classic PC games like Roller Coaster Tycoon now playable on smartphones, this next generation of thrill-ride creator is a welcome interactive experience. It’s always fun to build, ride and destroy roller coasters – and ScreamRide offers plenty of ways to share the thrills with your friends.

Yelling at the screen to tell the female protagonist not to go downstairs alone at night will no longer be futile. In this interactive horror game, you control all the action. The story, which was crafted by filmmakers Larry Fessenden and Graham Reznick alongside game developers Supermassive Games, traps eight friends in a remote mountain getaway with a psycho on the loose. The game stars a Hollywood cast that includes Brett Dalton (Agents of S.H.I.E.L.D), Hayden Panettiere (Nashville) and Rami Malek (Need for Speed). Players will take control of each of the characters as they explore the creepy world and try to survive until dawn. No one is safe from death. And every choice made in the game will result in a different experience. The script was over a thousand pages long, opening up hundreds of different endings for players to explore. The Butterfly Effect technology ensures that no two games will be played the same. The one constant is that the game is scary. Don’t play this one alone or in the dark.