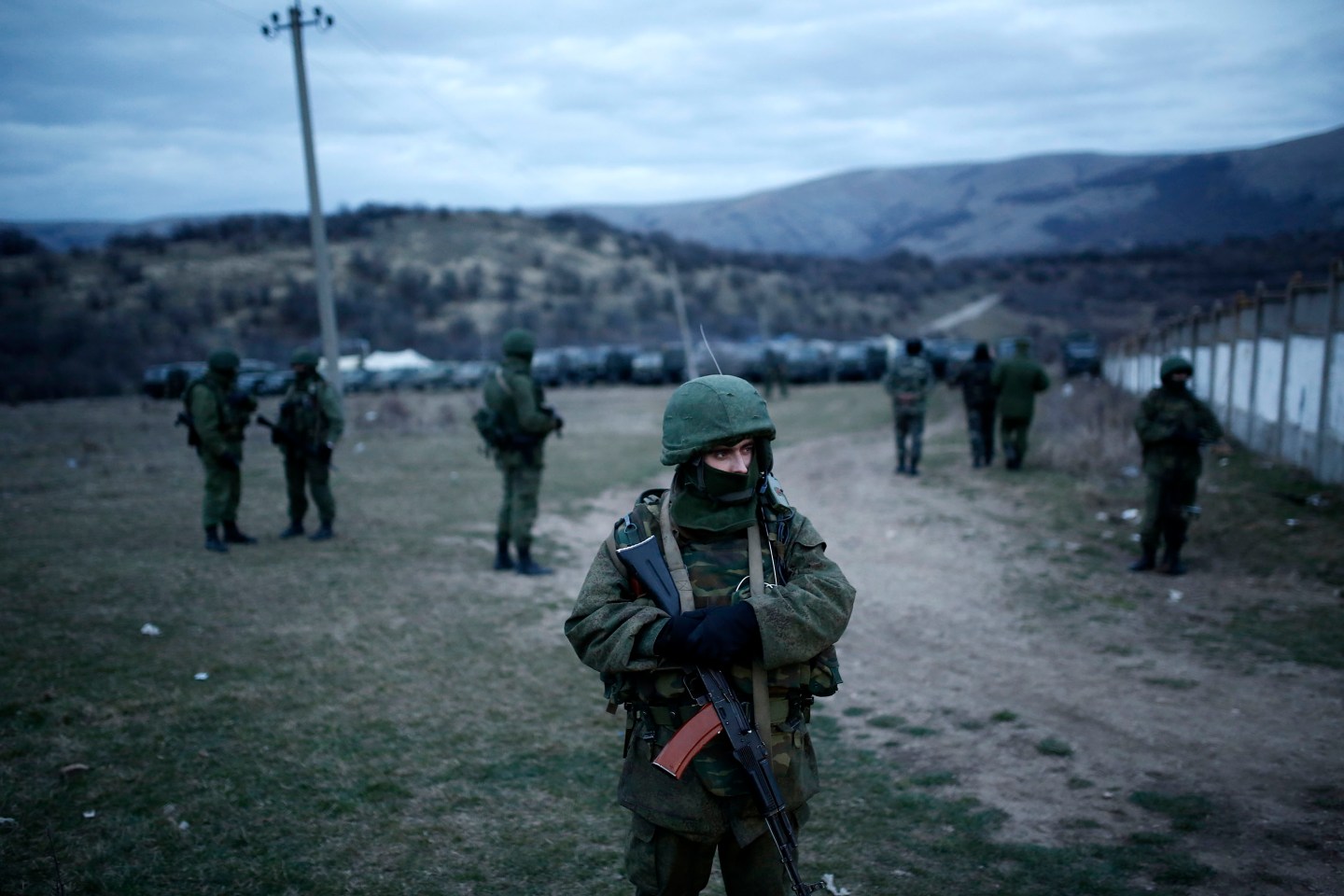 SIMFEROPOL, UKRAINE - MARCH 2: Members of the Russian armed forces stand guard around the Ukrainian military base in the village of Perevalne, 20 km south of Simferopol, on March 2, 2014. Russias armed forces have surrounded Ukraine's troops in the Perevalnoye neighborhood in Ukraine's Autonomous Republic of Crimea, on Sunday. Ukraines military units in Perevalnoye, some 20 km far from Crimeas capital Simferopol, were encircled by more than 200 Russian soldiers. Russia currently has 25 armored vehicles in the region. (Photo by Bulent Doruk/Anadolu Agency/Getty Images)
Anadolu Agency--Getty Images

Stock markets around Asia and Europe rebounded strongly Monday, as the threat of a Russian invasion of Ukraine receded and the U.S.’s weekend airstrikes against jihadists in Iraq appeared to blunt their advance.

Meanwhile in Europe, Germany’s DAX index recovered 1.6%, while the U.K.’s FTSE 100 rose 0.8% by lunchtime in Europe. The DAX, which includes some of the companies most exposed to the loss of trade with Russia in the aftermath of tit-for-tat sanctions, lost 7% in the last two weeks.

The main reason cited for the bounce was the weekend news that Russia had stopped military exercises on the Ukrainian border and had ordered the troops involved to return to base.

The maneuvers had created fears that the Kremlin would send in regular armed forces under the guise of a humanitarian intervention to help the civilian populations of Luhansk and Donetsk, the largest two remaining hold-outs controlled by pro-Russian separatists. Both the U.S. and Ukrainian governments have said they would regard any incursion under such a pretext as an invasion.

Ukraine’s military has made deep, if costly, inroads into the areas controlled by the separatists in recent weeks, and there were widespread reports of heavy fighting and artillery fire in and around Donetsk Monday.

Outside Europe, a new 72-hour ceasefire in Gaza has also come into effect Monday, although reaching a longer-term peace agreement still seems out of reach for Israeli and Palestinian negotiators.

And in Iraq, Kurdish fighters have recaptured two towns from the jihadist Islamic State fighters, helped in part by three days of U.S. airstrikes that have destroyed some of their armored vehicles. The attacks appear to have halted IS’s advance toward the Kurdish capital of Erbil, at least temporarily.

But the rebound in stocks has not been matched by any meaningful sell-off in ‘safe-haven’ assets in Europe, suggesting that there is little real confidence in a lasting improvement in sentiment in the near term. The German 10-year bond yield is only 2 basis points off the record low of 1.04% that it posted on Friday, while gold is less than 1% off last week’s highs. The 10-year U.S. Treasury bond yield is, however, up 9 basis points from its low of last week at 2.44.

A basis point is one-hundredth of a percent. Bond yields move inversely to prices, meaning that yields fall when investors pile into bonds looking for more safety.

Crude oil futures have also slid somewhat, and the Brent benchmark in Europe was trading at $105.55 by 0700 EDT, down $1.14 from last week’s highs. The front-month contract on the New York Mercantile Exchange had likewise fallen 66c from its high on Friday.