He laughs, learns, and has impeccable manners. Oh, and he’s a robot 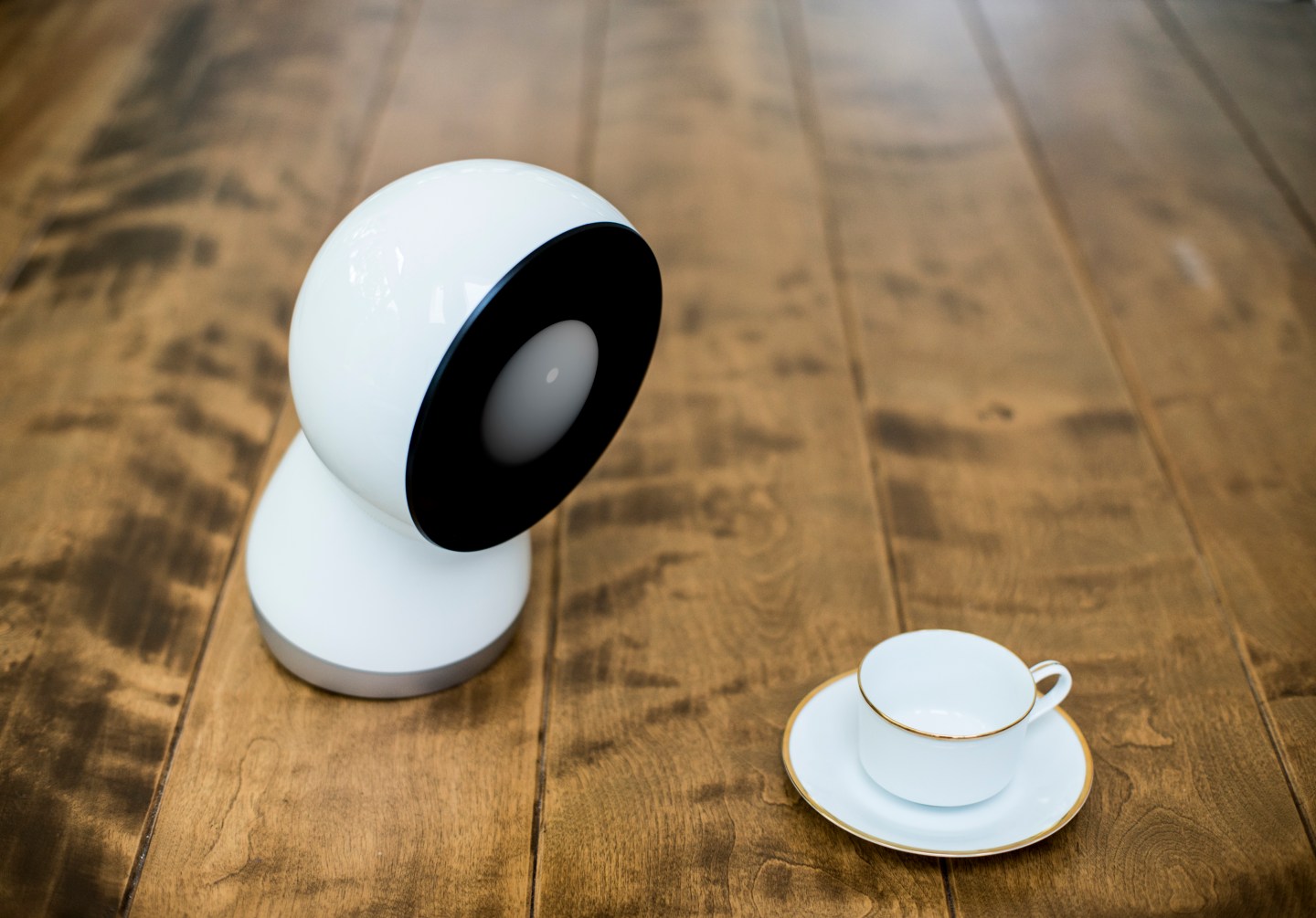 At first glance, Jibo looks a bit like Wall-E’s robot girlfriend. Both Jibo, a real robot, and Wall-E’s girlfriend, the fictional Pixar character, have the look of a futuristic Apple product: reflective white plastic, round curves, a black screen for a “face,” and smooth swiveling movements.

But Jibo’s raison d’être is slightly more in line with Rosie, the robot maid from the 1960s animated television series The Jetsons, and its operating system is more akin to the one employed by Samantha, the artificially intelligent character from the 2013 Spike Jonze film Her. (One key difference: Jibo is male, according to its makers.)

Jibo is described as a “family robot” because it is able to see, hear, speak, learn, and help families with a variety of tasks around the house. It—he?—can “relate” by expressing itself in natural language, using “social and emotive cues so you understand each other better.” Jibo is meant to be a companion.

So far, people like Jibo. A crowdfunding campaign, launched last month, raked in more than $1.5 million from more than 3,500 people, handily surpassing its $100,000 target. (The Boston-based company does not expect to ship its first units, priced at $499 each, until the 2015 winter holiday season. The crowdfunding campaign is designed to get developers excited about building apps for the robot, it said.)

Naturally, I had to meet Jibo. Off to a hotel room in Midtown Manhattan, then, where two Jibos and Dr. Cynthia Breazeal, the robot’s creator, awaited me. The robot is not yet fully functioning, it turns out. I watched a prepared demo where Jibo, about a foot tall, turned to look me in the eye. This was disarming at first, as if I was being followed by a security camera. Once he started talking to me, it began to feel more natural—as natural as a robot in a 1980s science fiction movie, anyway. Unlike his lesser robotic peers, or, say, a smartphone, Jibo did not rudely buzz or ding when there was a new message to communicate to me. He politely said, “Excuse me, Erin,” and waited for me to respond before continuing.

In the room, Jibo showed off his swiveling, spinning and leaning moves to me, along with some of the programs he’ll feature. He ended his performance with a cheesy joke, and his eyes turned to tiny half-moons when he laughed at the punch line.

Jibo can perform a number of functions. He can tell children’s stories and snap family photos using face recognition. He can place Skype calls and handle communications for which you would normally use a phone. Jibo is meant to stay in the home, perched on a table or countertop, and a demo video shows him greeting a single man when he comes home from work and offering to order Chinese takeout. In another scene, Jibo is hanging out while a woman kneads bread. He chimes in to remind her that her daughter is picking her up soon. “Thanks, Jibo,” the woman responds, not unlike Jane Jetson talking to Rosie.

Jibo can be considered the next logical step past today’s “telepresence” robots, which work only by connecting a smartphone or tablet—a brain, if you will—to a mobile base. For example, Romo augments your cell phone with rubber tank treads, though it requires a tablet or another phone to serve as a remote controller. Ubooly is a plush children’s toy in which parents can insert their cell phone for playtime. The Double telepresence robot, essentially an iPad on top of a Segway, allows people to feel physically present in meetings and move around the office when they’re working remotely. It’s a bit like Max Headroom on a broomstick and, to be frank, a little silly in practice.

Jibo works with smartphones, but Breazeal chose to give the robot its own brain, rather than rely on a smartphone. The smartphone would have limited the robot’s capabilities, she says. As it turns out, people don’t like to put their phones into a robot anyway. They prefer to keep it on hand, Breazeal says.

Whether that can make a difference—or translate to sales of in-home robots—is up for debate, but if anyone can figure this out, it’s Jibo’s inventor. Breazeal has dedicated her career to social robots, starting as a grad student at M.I.T. When she was younger, she didn’t understand why NASA was sending robots to Mars but they still hadn’t arrived in people’s homes. It’s because those robots weren’t designed to be social, she reasoned. Breazeal went on to build the first a social robot, which was called Kismet and intended for children. She has since published numerous studies on social robotics and in 2010 delivered a TED talk on the subject. People respond to human-like robots the same way they respond to people, she argued, and robots with the ability to convey expression increase empathy, engagement, and collaboration among people in a way that a robot with a flat demeanor cannot.

An estimated 3 million service robots, which are intended for personal and domestic use, were sold in 2012, according to the International Federation of Robotics, representing sales of $1.2 billion. The IFR predicts 22 million robots to be sold through 2016.

Jibo is purposely designed to not resemble a human, Breazeal says. The goal is to create what she calls a humanized experience, “because that’s what empowers people,” she says. Robots that try to look like human beings end up being a little too science fiction.

Artificial intelligence has certainly been top-of-mind for many Americans, both because of the film Her and ever-present economic fears that robots will make our jobs redundant. A recent New York Times article, “The Future of Robot Caregivers,” sunnily outlined how robots could lighten the burden of caring for aging baby boomers:

In an ideal world, it would be: Each of us would have at least one kind and fully capable human caregiver to meet our physical and emotional needs as we age. But most of us do not live in an ideal world, and a reliable robot may be better than an unreliable or abusive person, or than no one at all.

In Japan, robots help with a nursing shortage by conversing with patients that have dementia. Similar life-helper robots can be found in Sweden and around Europe, according to the Times.

Not everyone welcomes this development. “This how to fail the third machine age,” wrote Zeynep Tufekci, a sociology professor at the University of North Carolina’s iSchool, in response to the article.

In my view, warehousing elderly and children—especially children with disabilities—in rooms with machines that keep them busy, when large numbers of humans beings around the world are desperate for jobs that pay a living wage is worse than the Dickensian nightmares of mechanical industrialization, it’s worse than the cold, alienated workplaces depicted by Kafka.

It’s an abdication of a desire to remain human, to be connected to each other through care, and to take care of each other.

Meanwhile, a new study from Pew Research suggests that tech industry influencers are split on whether robots will help or hurt the economy. Just over half of those surveyed believed robots won’t take away more jobs than they create, resulting in a net positive for the economy. However, the other half felt less optimistic about our robotic future..

The other 48%, though, think that robots will displace huge numbers of white and blue collar workers in the next 10 years, which would not only leave people unemployed but which could disrupt social order.

Breazeal contends that Jibo isn’t meant to be a caregiver for aging people or a replacement for human labor. The robots are meant to help older users age independently. “Jibo is about empowerment and helping people do what they want to do and what they need to do,” she says. “Its not about replacing people.”

“There’s a lot of kneejerk reaction,” she adds. “We’re not trying to create a robot caregiver at all. We’re empowering people to live independently and be emotionally connected to their family, because that’s what matters.”