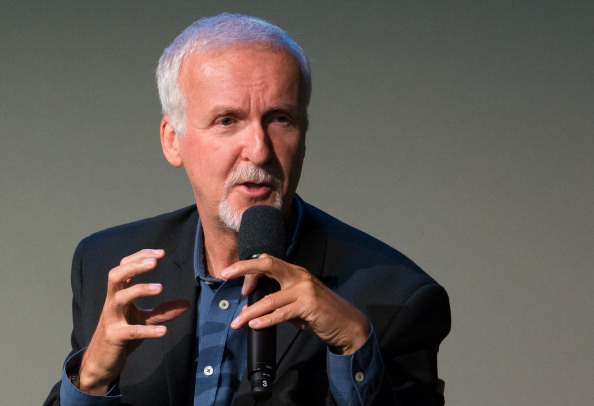 Oscar-winning executive producer and director James Cameron has always been active in environmental issues. That’s one of the reasons executive producers Joel Bach and David Gelber reached out to him about Years of Living Dangerously, a nine-part documentary series on climate change that aired earlier this year on Showtime.

The pair of 60 Minutes producers left the security of their CBS jobs to raise the money and bring to life personal stories from around the globe focusing on climate change. The gamble paid off: Years of Living Dangerously was nominated for two Emmy awards: Outstanding Documentary or Nonfiction Series and Outstanding Writing for Nonfiction Programming. The awards will be given out later this month.

“This is their conception,” Cameron said. “They come out of investigative journalism at 60 Minutes with an incredible pedigree and they believe strongly in this issue. This is the biggest problem our civilization is facing, and they just felt that they needed to quit their day job and go do this. I respect that kind of passion. I also happen to agree with them that this is an enormous problem that we’re facing.”

Bach said that while 60 Minutes was willing to cover climate change stories once a year, the show had a full slate. And Bach and Gelber had unearthed too many stories that they wanted to fully explore. What began as a traditional documentary movie idea evolved into a television series after a meeting with executive producer Jerry Weintraub, who said TV was the best medium to reach a wide audience. But it was not without it’s challenges.

“Look at all the other environmental shows on TV, there aren’t any,” said Cameron. “They’re almost impossible to get funded. I’ve been trying to get environmentally themed programming funded for years. It’s just nobody wants to make it because they know that people don’t tune in. So the question was how can we do something that is so compelling that we actually generate some viewership.”

Bach and Gelber decided to use Hollywood actors who were interested in climate change to serve as correspondents who would be “on the ground” exploring the issues. They were able to attract the likes of Matt Damon, Don Cheadle, Harrison Ford, Jessica Alba, Michael C. Hall, Ian Somerhalder, Olivia Munn and Arnold Schwarzenegger, who also signed on as an executive producer. But that was an idea that Cameron wasn’t on board with at first.

“I have to admit that I was wrong because my initial take when Joel and David proposed that was we were going to cheapen our message,” said Cameron. “I turned out to be wrong on that because there’s a difference between a celebrity coming in and doing some drive-by environmentalism, where they just do a quick five-minute standup and they phone it in versus what these men and women did. They really committed to rolling up their sleeves and becoming investigative journalists themselves.”

Tapping into celebrities also helped the producers— who raised $1 million in funding for the project outside of the Hollywood studio system— connect with millions of social media users.

“Our social media presence is pretty good for an environmental documentary series,” said Bach. “Arnold has over 10 million Facebook fans and Ian has over 13 million. Those two have active and loyal fan bases. Ian has a young fan set who clamor to hear whatever he has to say. He’s been a powerful force in activating a younger generation. Olivia Munn has a big Twitter presence and Don Cheadle and Chris Hayes have also been active. Every week they send out posts on Facebook or Twitter about the show. It’s a new powerful tool that didn’t exist 10 years ago.”

In addition to Showtime re-airing the first season this fall to its 23 million subscribers, it will also be available on DVD, iTunes and Amazon beginning September 7. Bach said Showtime saw this show as a one-season project. But Bach said the producers are currently talking to multiple cable and network outlets that are very interested in continuing the series.

“The Emmy Award nominations will help us with our second season,” said Cameron. “It will raise the show’s stature. We weren’t happy with the ratings numbers that we got. We had hoped for more, but we had been braced for less because historically people tend to not tune into something that’s environmentally themed or climate change related. It’s just something they don’t want to know about. It’s part of the whole denial process that we’re all in as a society that we really have to face up to.”

The website (http://yearsoflivingdangerously.com/) offers a call to action for viewers to connect directly with organizations involved in climate change. It also asks people to write in and share their own stories, which could end up in the second season of the show.

“When people have legitimate stories of how they’re being impacted, we could incorporate that into the show,” said Cameron. “We’re especially interested in converts — people who believed because of a lifetime of political and social perspective that they grew up with, and then all of a sudden they’re thinking for themselves. They’re confronted with the facts and the consequences and they become converts. Those are the people that we want because we need a lot more converts. We need middle America to wake up and smell the coffee.”

While the website currently offers a section for educators, Bach said a huge initiative is in the works with the National Wildlife Federation. They’re taking all nine episodes and turning them into curriculum for classes. Each episode is being edited down into segments for middle school, high school and college instructors can talk about topics like science, politics and environment.

“We’ve been inundated with requests to get this into the schools,” said Bach. “It’s great for kids because we’re not just shoving facts down their throats.”

Bach said males ages 55 to 64 were the most active when it comes to participating in climate change activism, but they designed the show to reach a broad audience. Cameron added that after viewing the show, it’s important to use technology and have legitimate and informative places for people to find out how they can take action.

“There’s a problem with documentary television in general that it doesn’t give you action items,” said Cameron. “You’re left with this sense of hopeless dread and it creates a free floating anxiety. That’s why people unplug. But if you do have a call to arms and people do feel like there are things they can legitimately do to make a difference for their kids and the world at large, they’ll do them.”

Cameron is also practicing what he preaches with the production of the next three Avatar films, which will feature green sets. In fact, the Manhattan Beach Studios will use solar power to be net positive, which means they’ll be selling back more energy that they’re consuming despite the massive amount of computing that the movies will require.