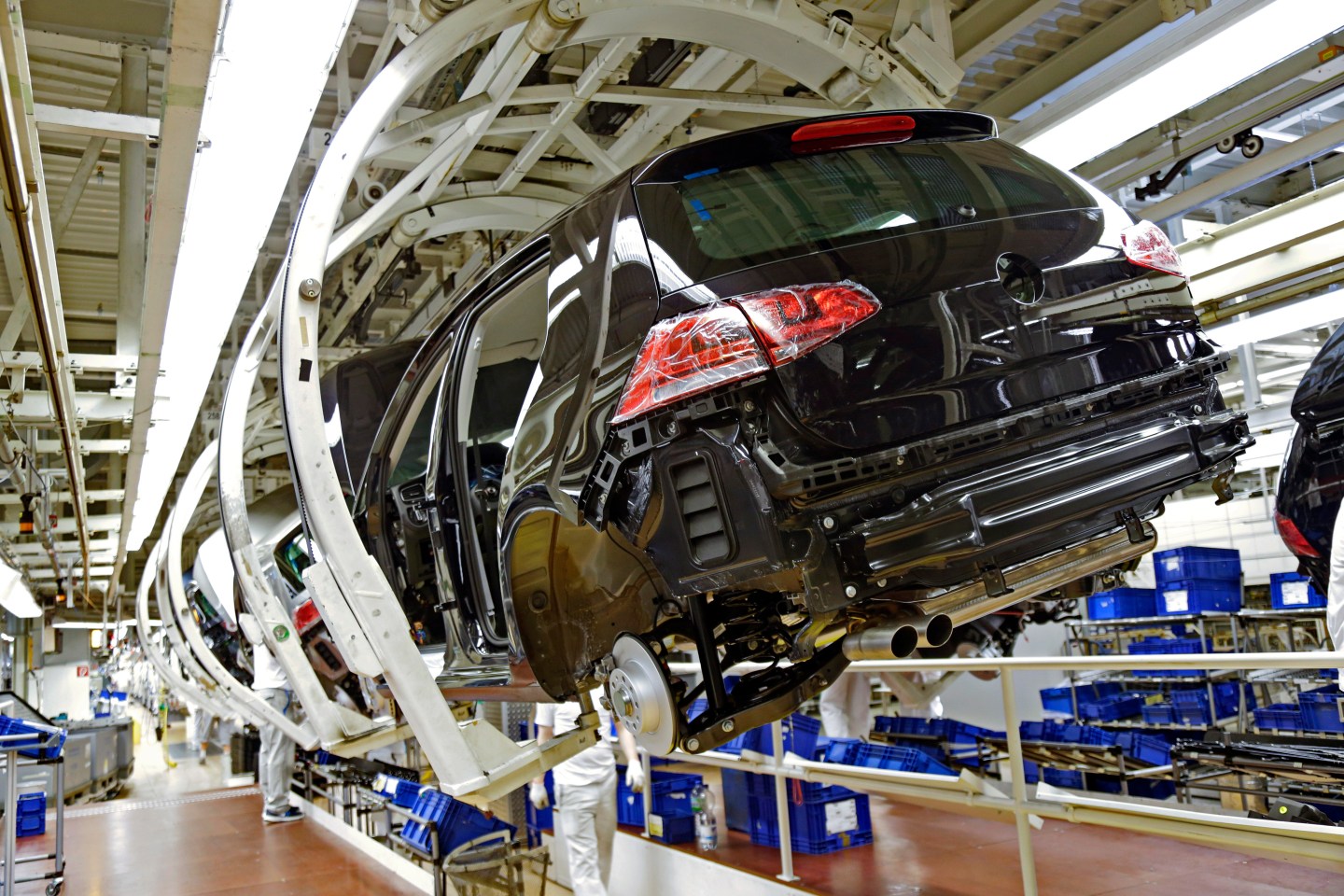 The shadow cast by the crisis in Ukraine lengthened Wednesday as Europe’s largest economy reported a sharp and surprising drop in factory orders in June.

And there was more bad news for the Eurozone later as Italy, the currency bloc’s third-largest economy, said it had fallen back into recession, as economic output fell for the second successive quarter in the three months to June.

Released into a market already spooked by reports of a fresh build-up of Russian troops on the border with Ukraine, the news sent Eurozone stocks sharply lower and briefly pushed the euro to its lowest level in nearly a year against the dollar.

The figures underlined the diverging growth paths of the U.S. and Eurozone economies. The U.S. economy is set to expand strongly in the second half of the year, while Wednesday’s figures suggest the Eurozone’s recovery may grind to a halt over the summer.

The German Economy Ministry said incoming orders fell a seasonally-adjusted 3.2% from May, double the 1.6% drop posted in May. In year-on-year terms, they were down 2.4%.

The benchmark German DAX stockmarket index fell 1% on the news to its lowest level since March, while the broader Euro Stoxx 600 index of Eurozone blue chips fell 0.7%.

The figures corroborate in ‘hard’ data a trend that has been in evidence now for some months, as the gradual escalation of the crisis in Ukraine undermines both the Russian and the European economies. The closely-watched ifo research institute’s business confidence index has fallen for the last three months, with exporters’ expectations at their gloomiest in a year.

The figures are particularly worrying, inasmuch as the month in question doesn’t even cover the much sharper deterioration in the situation since the downing of Malaysian Airlines flight MH17 over eastern Ukraine in July, an event which has triggered a much broader round of economic sanctions by the U.S. and E.U. on Russia.

“More than anything, geopolitical developments and risks have probably led to a certain restraint in ordering,” the Economy Ministry said in a statement.

Germany’s status as Europe’s workshop, and its high degree of specialisation in investment goods, make the monthly readings of incoming orders an important leading indicator for the Eurozone as a whole.

Monthly swings can be quite volatile–the Ministry noted that, adjusted for particularly large ‘big-ticket’ items, orders rose by 1.1% on the month–but the overall level of orders over the second quarter as a whole was down by 0.6% from the first quarter, suggesting that one of the key components of the Eurozone economy is set to lose strength in the near term. The Ministry warned that the outlook for the next few months was “rather moderate”.

The Eurozone has enjoyed a mild recovery so far this year, thanks to a vigorous rebound in some of the counties worst affected by the crisis, and signs of stabilisation even in countries such as Greece.

But momentum has flagged in recent weeks, and countries such as France and Italy, which have failed to implement the kinds of liberalizing reforms forced on Spain and Portugal, have started to drop behind the rest of the group. The Italian statistics office Istat said gross domestic product shrunk by 0.2% in the three months to June, and was down 0.3% from a year earlier.