U.S. in Africa: There’s no race with China 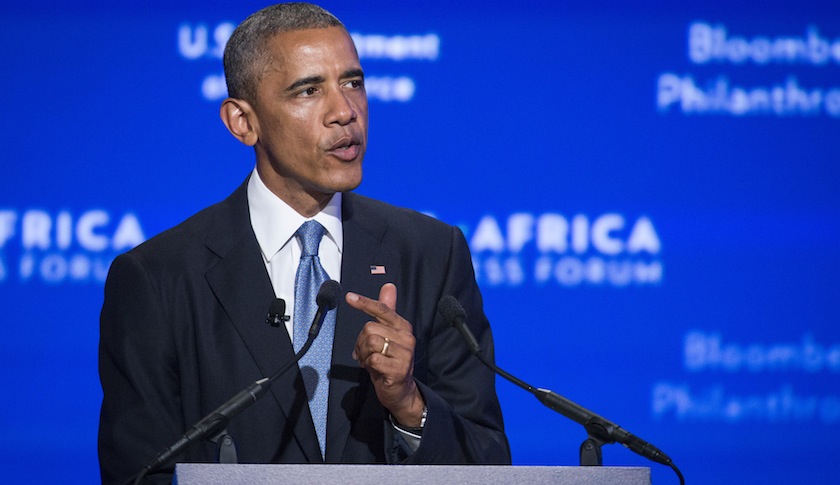 It makes sense that the U.S. government and American firms would want to invest in Africa, given that it is home to 7 of the 10 fastest growing economies in the world over the past 10 years. But while Thursday’s announcement represents a step forward for American engagement in the region, it pales in comparison to what China is doing, especially when you take into account the fact that the U.S. economy is still twice as large as China’s.

China surpassed the U.S. as Africa’s largest trade partner right around the time of the financial crisis, and trade between China and Africa has increased ever since. Trade between Africa and the U.S., on the other hand, has stagnated, as you can see in the chart below from Yun Sun, a fellow at the Brookings Institution who focuses on China’s relations with Africa.

Given the poor quality of Chinese economic data, it’s more difficult to measure how much Chinese firms invest directly in Africa through building infrastructure or purchasing assets, but a U.S. Government Accountability Office report from last year estimated that U.S. firms still lead their Chinese counterparts in this kind of investment, but just barely. The U.S. only invested 23% more than China in Sub-Saharan Africa from 2007 through 2011, and the GAO suspects that even its approximation might be underestimating Chinese investment in the continent.

Obama, however, has dismissed the notion of some sort of competition for the business of African development. In an interview this week with The Economist, the president showed a much more sophisticated view of China’s role in Africa than American politicians typically display:

My view is the more the merrier. When I was in Africa, the question of China often came up, and my attitude was every country that sees investment opportunities and is willing to partner with African countries should be welcomed. The caution is to make sure that African governments negotiate a good deal with whoever they’re partnering with. And that is true whether it’s the United States; that’s true whether it’s China.

This is in stark contrast with the sort of rhetoric that the president himself has used, as he has often talked about the need to “win the future” by out-educating, out-innovating, and out-competing the Indians and the Chinese. And it’s not just the Obama Administration that likes to paint China as a competitor rather than a collaborator, as American politicians tend to describe the world in stark, competitive terms during election season and during high profile events like the State of the Union. But the president appears to understand that the world is a bit more complicated than an economic football game. The above quote suggests that he believes that African economic development would be good for America even if it’s not American firms doing the development, as a vibrant Africa could be an excellent destination for American exports.

China, for its part, has approached the U.S. to work in tandem on infrastructure and development projects in Africa.

That being said, it would behoove Americans for U.S. companies to invest even more in Africa. Studies show that firms that invest abroad are more likely to spend money and create jobs at home as well. Furthermore, American companies are likely to export more to countries with which they already have a history of partnership.

The more complicated question is whether all this investment is actually good for Africans. There has been much made in the press about China’s involvement with Africa, even though the relationship is still rather limited in scope. As Brookings’ Yun Sun wrote in a recent white paper,

The popular focus on China’s vast economic endeavors in Africa … seems to suggest that Africa is somehow ‘critical’ for China. In reality, Africa accounts for only a tiny percentage of China’s overall foreign economic activities: China’s investment in and trade with Africa represents 3 percent and 5 percent of its global investment and trade, respectively.

And this investment and trade is focused mainly in the resource-extraction industries. This is also true for the U.S.: Sun points out that the recent decline in trade between the U.S. and Africa has much more to do with the explosion in U.S. energy production than anything else. Since the U.S. is producing much more of its own oil and natural gas, it has less of a need to import it from Africa. But resource-extraction industries of the sort that make up most of Africa’s foreign trade aren’t the kind that usually lead to economic development. To do this, African nations must reinvest the profits coming from these industries into infrastructure and economic development that will broadly benefit its population and help ease the transition from agricultural to manufacturing-based economies.

This is the advice that Dutch researchers offered in an extensive five-year study released last year called Asian Tigers, African Lions, which looked at the differences in development between successful Southeast Asian countries and poor African ones. The researchers found that the Asian model of development focused on making incremental investments in poor rural areas that allowed populations to slowly improve agricultural productivity, which then freed the population to seek educational opportunities and ultimately leave rural areas for more economically vibrant regions.

U.S. and Chinese firms are going to come to Africa to seek out economic opportunities that benefit themselves. Along the way, they will build infrastructure and provide much-needed jobs that will increase tax revenue for African governments. But from there it’s up to Africans themselves to invest that money wisely, in a way that will benefit their societies as a whole and enable African nations to move up the economic ladder. And if African countries are able to recreate the Asian miracle of the post-war years, the size of American or Chinese investments in 2014 will matter very little.