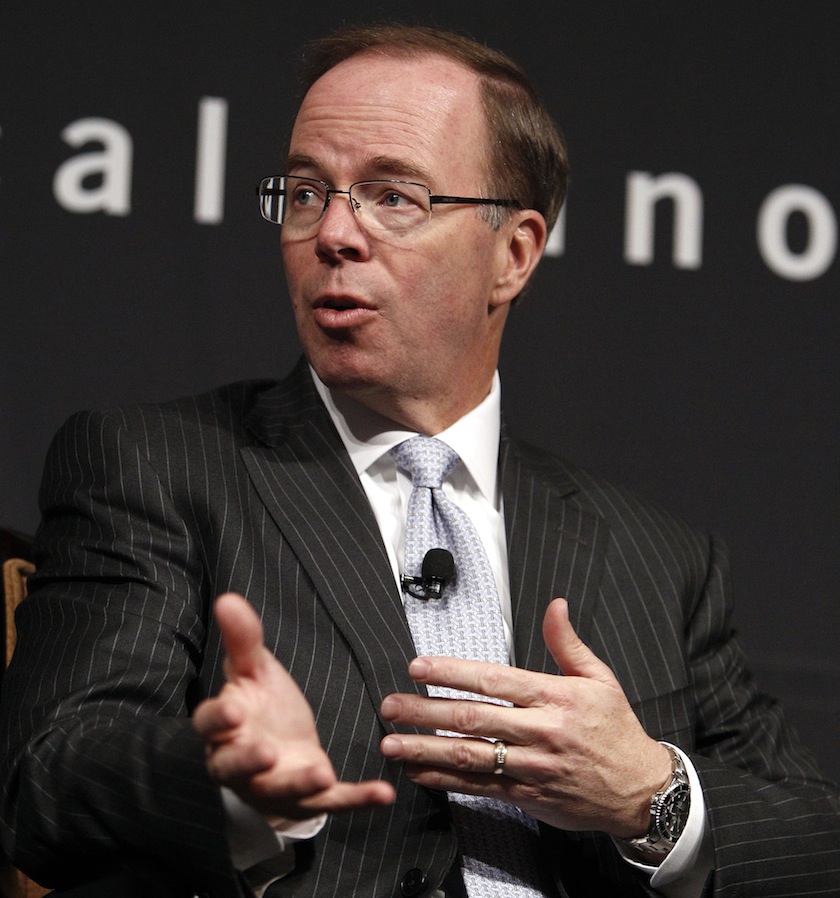 John Hammergren, Chief Executive Officer, McKesson Corporation, speaks during the Cleveland Clinic's 2010 Medical Innovation Summit titled "Obesity, Diabetes, & The Metabolic Crisis" in Cleveland, Ohio, U.S., on Tuesday, Nov. 2, 2010. The number of people in the U.S. who are obese has more than doubled in the past 30 years to 72 million, according to the CDC. Photographer: David Maxwell/Bloomberg
David Maxwell—Bloomberg via Getty Images

John Hammergren, CEO of McKesson (MCK), narrowly avoided a $140 million cut to his $182.6 million severance pay package. He would have probably been able to get by just fine on the remaining $42 million, which includes more than $2.2 million for the provision of an office and secretary, but that would have been a big haircut for any CEO exit payout.

Forty-four percent of shareholders who voted at McKesson’s annual meeting last Wednesday supported a resolution calling for the company to prevent what is known as “accelerated vesting” of outstanding equity pay. Often, when a CEO or other executive is fired, the stock options and restricted stock that would vest slowly over time vest all at once, resulting in a pay windfall called a golden parachute.

The health care service company’s vote is one in a long series of both successful and unsuccessful resolutions addressing this issue. Like Hammergren’s, most CEO golden parachutes are made up of between 75% and 80% equity pay. Eliminating those payments would save shareholders a lot of money when they fire the CEO. That’s exactly what happened earlier this year at Valero Energy, Gannett, and Boston Properties. For example, if Gannett CEO Gracia Martore were to lose her job as a result of the spin-off announced Tuesday, she would receive $23 million less in severance as a result of the changes at the company.

McKesson’s resolution refers to a number of other companies—including Apple, Chevron, ExxonMobil, IBM, Intel, Microsoft, and Occidental Petroleum—that have imposed limitations on accelerated vesting of unearned equity pay. It also quotes research from pay consultant James Reda & Associates that found that over one-third of the largest 200 companies in the U.S. have adopted roughly similar policies.

Resolutions to limit CEO golden parachutes were pioneered by a number of institutional investors, including Amalgamated Bank and the International Brotherhood of Teamsters. “Accelerated vesting inherently severs pay from performance, and shareholders are becoming much more surgical in their analysis of whether executive pay is related to actual performance,” says Scott Zdrazil, director of corporate governance at Amalgamated. “Shareholders are concerned about the likelihood of pay for failure, which is what happens if stock compensation is automatically triggered on a termination regardless of performance. We don’t have a problem with equity pay, but only if it is justified by the performance of the executive.”

Like McKesson’s case, though, not all resolutions calling for exit pay reductions were successful this year. At Avon, which held its annual shareholders meeting on May 6, slightly less than a third of shareholders supported the move.

McKesson, of course, is no stranger to pay controversy. Hammergren has been one of the highest paid CEOs in the U.S. for several years, and 78% of shareholders voted against the company’s executive pay policies last year. This led to policy changes that resulted in what the company claims is a reduction in CEO pay of 26%, though Hammergren still earned $66.3 million in 2013.

Then there was the news last year that Hammergren was in line for the highest pension ever paid to a U.S. CEO—$159 million. The figure was reduced by $45 million to a fixed maximum of $114 million. But he’s also due for another $30 million from his super-sized 401(k) plan on retirement. This doesn’t even include Hammergren’s exit pay, giving him a total farewell payout of almost $300 million.

Hammergren vested in almost 500,000 shares last year in stock and options, but he directly owns only around 4,000 shares in McKesson. He has another 500,000 shares in a family trust. Bear in mind, the CEO has received plenty of shares over the years, most of which must have been disposed of. And now he will receive many more, whether or not he is fired.