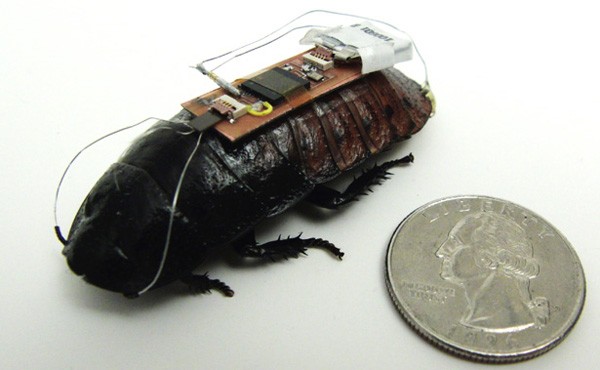 Scientists at North Carolina State University are using Microsoft’s (MSFT) Kinect camera for something very different than video games. The insects, which seem able to withstand anything, may one day soon be helping emergency first responders navigate disaster wreckage. Because the bugs are so small, they can get through nooks and crannies that neither rescue dogs nor people can navigate. Researchers have been using Kinect, the same camera technology in Xbox 360 and PCs, to create a remote control that will enable people to guide the insects like a remote-controlled car. The cockroaches can be equipped with miniature cameras and can be sent in before dogs and humans, which allows emergency personnel to get a first look at the situation.

“For years, roboticists have been trying to mimic insects when building centimeter-scale robots,” said Dr. Alper Bozkurt, an assistant professor of electrical and computer engineering at NC State and co-author of a paper on the work. “We came up with the idea of building a partnership with insects rather than trying to mimic them, similar to riding horses before our motorcycles and cars took over the streets. Roaches were the most easily accessible insects and are very robust walkers.”

The interface that controls the roach is wired to the roach’s antennae and cerci. The cerci are sensory organs on the roach’s abdomen, which are normally used to detect movement in the air that could indicate a predator is approaching – causing the roach to scurry away. But the researchers use the wires attached to the cerci to spur the insect into motion. The wires attached to the antennae send small charges that trick the roach into thinking the antennae are in contact with a barrier and steering them in the opposite direction.

Bozkurt’s team wanted to build an automated test platform where they could objectively assess whether they could turn an insect into an insect biobot. One criterion was to run the experiments in the dark, so they started to use a Kinect camera’s depth sensor to find the insect without any ambient light.

“The Kinect camera knows the path that needs to be followed by the insect,” said Bozkurt. “Then it divides this route into multiple waypoints and moves the insect from one waypoint to another. It detects the insect from its specific shape and it sends necessary waveforms to the backpack the insect is wearing. This backpack applies microvolts of impulses to the insect’s sensory organs, which helps us to steer the insect. It’s similar to riding a horse with reins.”

The program also uses Kinect to collect data on how the roaches respond to the electrical impulses from the remote-control interface. This data will help the researchers fine-tune steering to control the roaches more precisely. The team will employ Microsoft’s new Kinect 2.0, which debuted with Xbox One, to further push this experiment forward.

“The advanced audio processing on the sensor could also lead to some interesting scenarios when we try to make the insects move toward a sound source,” said Bozkurt.

Having performed very successful demonstrations in the laboratory environment, the team (which includes NC State professors Edgar Lobaton and Mihail Sichitiu) has received funding from the National Science Foundation’s Cyber-Physical Systems program to bring this technology into real-life scenarios. The goal is to accomplish this within three to four years.

“We are hoping that the swarm of insect biobots will be able to sweep the rubble from one end to another in a very short amount of time, while letting first responders hear any calls for help coming from the victims buried under the rubble, or let them know about the potential hazards such as gas leakages,” said Bozkurt.

According to Bozkurt, one of the most efficient methods in engineering has been “biomimetics,” where researchers have looked at nature, learned from the existing biosystems and applied different engineering principles to mimic these when solving real-life problems. Despite several inventions and explorations, humans are still limited in their understanding and ability to mimic the relatively more complicated properties of biological machines.

“As engineers performing research on biological organisms, we are often fascinated by the complexity and operational efficiency of these systems and demonstrate this appreciation through an amplified respectful attitude towards these organisms,” said Bozkurt.

One day soon, the sight of cockroaches will be a relief to disaster victims thanks to video game technology. And we may think twice before trying to stomp out cockroaches the next time we cross paths. After all, they were deigned to live through just about anything that mankind can throw at them.