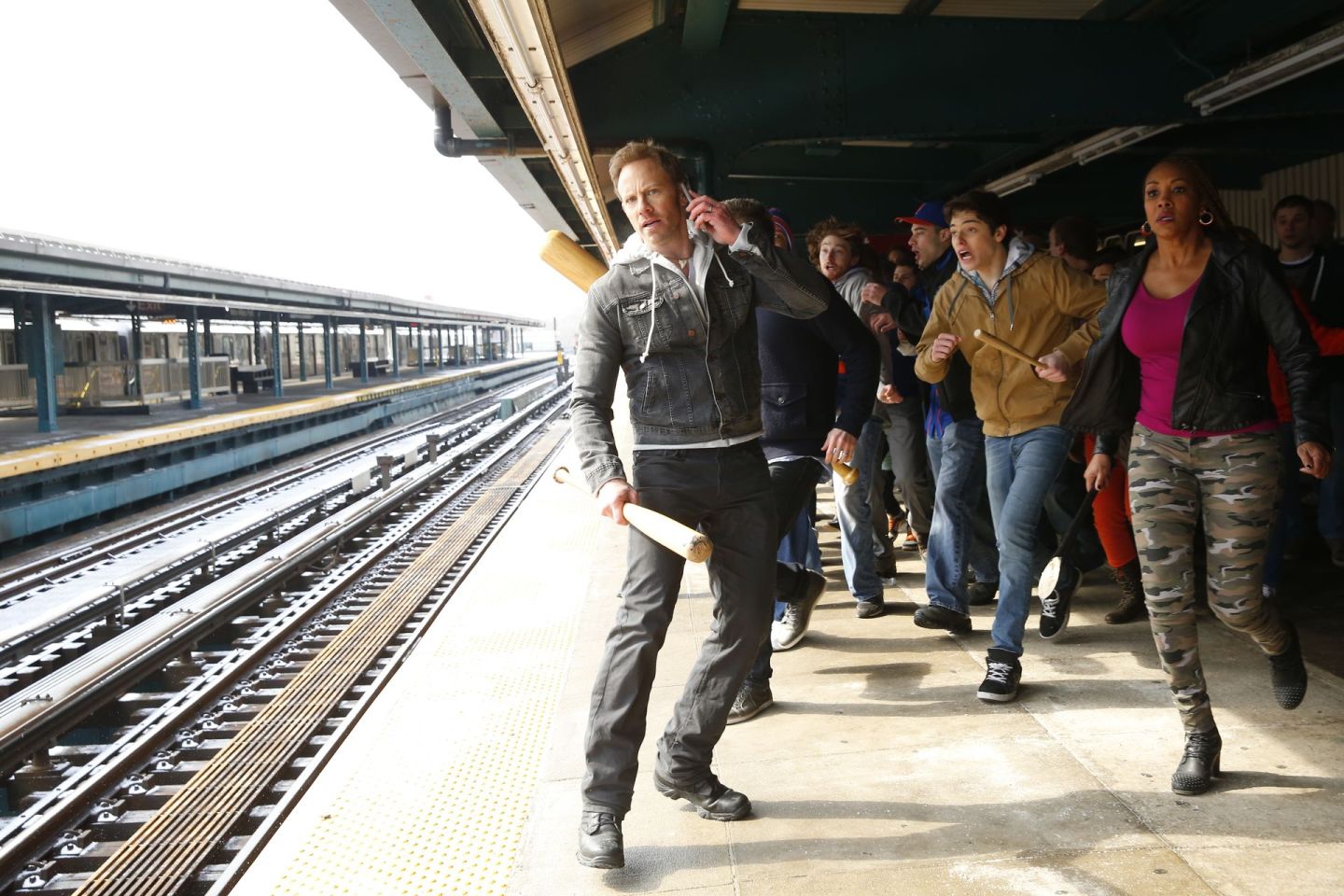 SHARKNADO 2: The Second One -- Pictured: (l-r) Ian Ziering as Fin Shepard, Dante Palminteri as Vaughn Brody, Vivica A. Fox as Skye -- (Photo by: Will Hart/Syfy)
Courtesy: Will Hart/Syfy

Mike Fenton is—without hyperbole—a living legend. As the casting director for The Godfather: Part II, One Flew Over the Cuckoo’s Nest, Raiders of the Lost Ark, and more than 250 other films, he has helped build the careers of some of the biggest stars in movie history. He also cast Porky’s. And Porky’s II.

“There are motion pictures that are made, and we as an audience say, ‘Why did they make that motion picture?'” Fenton says. It’s a good question, and a natural one to ask of Fenton’s next project, Sharknado 2, a sequel to last summer’s so-bad-it’s-good SyFy Channel movie that premiered on Wednesday. “I’m wondering if there are producers who get a project financed because of the thought that in social media, this particular project may have legs,” he continues, with full sincerity.

Adrift in Hollywood’s latest sea change, Fenton is one of many industry executives being pulled in a direction that’s new to the film industry. For everything from summer tentpoles to made-for-TV movies, studios are tapping social media-savvy talent in order to better target hashtagging viewers. The trend has become so pervasive that social media managers, with their services increasingly in demand, are even finding seats saved for them at casting sessions.

“In the past year, the tide has changed,” says Matthew Rhodes, president of Los Angeles-based Bold Films. “It’s something that comes up a lot in conversations that I’m having, whether it’s with managers, agents, financiers, at any time in the casting process.” So much for actors brushing up on their chops. Now managers and agents are recommending they improve their social media footprint, Rhodes says.

LaQuishe Wright, founder of Houston, Texas-based Q Social Media, has worked in Hollywood’s social scene for seven years, with clients that have included Zac Efron and Paul Walker on the talent side and Universal Studios and Sony Pictures on the business end. “Social is a quantifiable way to know whether or not someone has a large audience,” she says. “It is now part of those casting conversations, not only from a film perspective but for branding deals.”

Oliver Luckett, co-founder of Los Angeles-based media company TheAudience, agrees. He says social media firms like his have an impact on how projects are cast. “We’re not really at the [casting] table; we’re before the table,” he says.

For example, before the Super Bowl last February, Luckett sat in on advertising casting discussions where there was a list of six actors, only two of which had an impactful social media presence. “They were people like George Clooney, Brad Pitt, and Angelina Jolie—there’s a whole list of them, people who publicly denounce social media . . . I’ve seen those people’s names on lists literally checked off because they don’t have a Facebook page.”

But social’s impact is stretching beyond the marquee, even affecting casting decisions for minor players—especially when the role isn’t vital to the film’s quality. “Instead of just thinking about the person who’s just the actor, I think about somebody that’s got a bit more going on,” Rhodes says.

It seems a strategy that executives used to cast Sharknado 2, though Fenton claims otherwise. According to him, the casting process began by looking at actors, not necessarily celebrities. “Secondarily, we looked for actors with the skills necessary to portray the character,” he says. “And thirdly, if they do have the social media clout, that’s just the icing on the cake.” Joining original Sharknado stars Ian Ziering and Tara Reid, the sequel’s cast includes social media mainstays Perez Hilton, Kelly Osbourne, Kurt Angle, and Kelly Oxford, each of whom have more than 500,000 followers on Twitter.

According to Oxford—an author, screenwriter, and Twitter sensation—her agent got a call asking if she’d be interested in appearing in the sequel perhaps because a tweet she wrote about the original film went viral last summer. “It only makes sense to load something like that up with cameos, give us all one take so we look extra dumb, and release it to the masses to consume,” she says. Oxford has no performing credits listed on IMDB prior to Sharknado 2, and previously acted in “minor-league stuff.”

Multiple sources told Fortune that social casting decisions have stretched beyond made-for-Twitter movies into blockbuster fare, but no one interviewed for this story would point to a specific role and say it had been cast because of an actor’s social reach. “I see it talked about; I see it discussed; I’ve seen it happen,” Rhodes says.

According to Luckett, agents are keen on knowing their clients social metrics. He is quick to point out that Mark Wahlberg, TheAudience’s first client, has gone from having no official Facebook presence to being one of the most followed actors on the social network over the last three years. “Mark has 9 million fans; he reached 52.65 million unique people in the last 27 days, with 7.547 million engaged users—that means people who clicked like, share, or comment,” Luckett says. “I’ve been called many times by Ari [Emmanuel, CEO of William Morris Endeavor] to ask for the data that I just gave you,” he adds. (Emmanuel, a co-founder of TheAudience along with Luckett and Sean Parker, was unavailable for comment on this story.)

Luckett also revealed that the most popular object posted to Mark Wahlberg’s Facebook account over the previous month was a first look at the poster for Transformers: Age of Extinction. It reached 5 million unique Facebook users. Fresh off the Oscar buzz surrounding The Fighter, Wahlberg’s casting in the fourth installment of a Michael Bay franchise seemed a curious choice. Asked if social media played into this casting, Luckett responds, “I think that that’s one of those things that points in this direction.”

Likewise, Fenton says, casting Kelly Osbourne helped get the attention of Sharknado 2’s primary audience—men between 12 and 49 who are glued to their smartphones. “When we would set somebody like Kelly Osbourne, she would get on her Twitter account and talk about what she was doing in Sharknado 2,” he says. “It became a help for us, and it became a help for the media relations people, because it made a social media world aware that we were coming in July.”

Moving forward, Rhodes says he could see requests for social posts becoming part of the norm, just like studios ask talent to promote films by going on late-night television, being interviewed for magazines, or doing press junkets. Oxford, however, insists Twitter posts were not requested for her cameo in Sharknado 2. “That would have turned me right off,” she says. “I turn down sponsored tweets all the time.”

But at this early stage, Hollywood’s use of social media metrics seems to be in its infancy. Studios are also not necessarily looking at the quality of engagement that actors’ accounts have, and they aren’t yet segmenting an actor’s followers into target demographics, even though studios have the data to do so.

And though paid posts are becoming more popular for celebrities with commercial brands, no one interviewed had heard of an actor making a sponsored post to promote a film. “I feel like most actors, directors, writers on Twitter would tweet about what they appear in or have created, regardless of whether they’d been asked to or not,” Oxford says. Until, of course, they’re required to.

Correction, Aug 1, 2014: An earlier version of this article misstated the location of Q Social Media. It is based in Houston.