Lions and tigers and… CEOs? ‘The Wizard of Oz’ as leadership guide 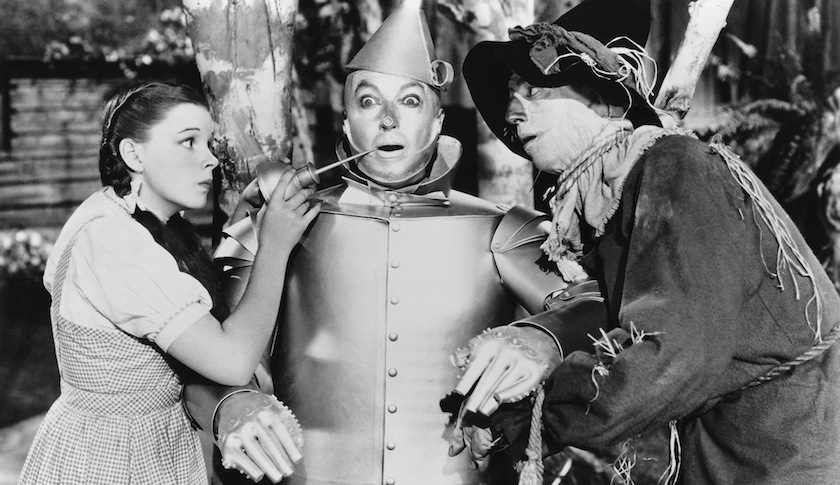 A scene from the Wizard of Oz with Dorothy, the Tin Woodman and Scarecrow as played by actors Judy Garland, Jack Haley and Ray Bolger. Hollywood, California: c. 1939 (Photo by Underwood Archives/Getty Images)
Photo: Underwood Archives

Toto, we’re not in Kansas anymore—we’re in a boardroom.

The little black Cairn terrier who rose to doggy-fame from MGM’s 1939 classic, “The Wizard of Oz,” (which was based on the book, The Wonderful Wizard of Oz, by L. Frank Baum) is arguably the most famous canine in movie history. Toto’s character (played by a female dog, believe it or not) might even be more important than some give him credit for. Kevin Fickenscher, medical executive and now business author, sure thinks so. Fickenscher, in his book Toto’s Reflections: Leadership Lessons from the Wizard of Oz, suggests that the greatest leader in the Land of Oz wasn’t the wizard. And it wasn’t Dorothy or Glinda, either.

Before he had written his own leadership book, Fickenscher was a fan of such guides. “I probably have almost every leadership book that’s ever been written,” he says, acknowledging that such tomes are “a dime a dozen.” To stand out, Fickenscher had to offer something unique. Enter Toto, who, in the film, didn’t enjoy any fancy pedigree: “He didn’t have a lot of degrees or special knowledge or, you know, certificates from obedience school,” jokes the author. Indeed, Fickenscher uses the example of Toto to argue that you don’t need royal breeding to be an effective leader.

Fickenscher originally trained as a physician and expected to become a family doctor. This led him to a slew of roles as chief medical officer: first at Catholic Health Care West (now Dignity Health), then at CareInsite (which WebMD acquired in 2001), and eventually at Perot Systems (created by two-time presidential candidate Ross Perot), which Dell bought for $3.9 billion in 2009. Fickenscher says his medical career has helped him understand the importance of collaboration. Just like in a hospital, or a company, every character on Dorothy’s journey had a role to play.

The cowardly lion, for example, brings commitment and, finally, courage to the little group. The scarecrow, Fickenscher reasons, brings contemplation. “Leadership is not necessarily about having brains, but the thought that comes from reflection.” Dorothy, meanwhile, brings a sense of vision and tireless pursuit of a goal: getting home.

Even the munchkins play an important role in the story, if you ask Fickenscher. They represent the support system that is so necessary to the organization as a whole.

So, what can leaders learn from a terrier? Good listening, for one. “Toto listens throughout the entire story. When he did speak up, he spoke up forcefully,” Fickenscher said. “I mean, when he barked, everybody sort of paid attention.”

Fickenscher believes Toto exemplifies the importance of taking a leap of faith. In one scene, Miss Gulch, who had caught Toto digging in her garden, arrives to take him away on her bike. “He’s in this basket, and it’s sort of safe in the basket, but if he doesn’t take a leap, he’s not going to be able to change his situation.” Toto bails from the bicycle basket, reuniting him with Dorothy and putting him directly on a path to success.

This may all seem like a stretch—and yet, not only is Fickenscher working on a sequel, but his book has company. The Wisdom of Oz: Using Personal Accountability to Succeed in Everything You Do comes out in September. Its authors, Roger Connors and Tom Smith, are the co-founders of Partners in Leadership, a California-based firm that advises businesses on corporate culture. The pair has authored other business books about the world of Oz, such as Journey to the Emerald City and The Oz Principle, which was a New York Times bestseller.

The Wisdom of Oz argues that Dorothy and her crew had to put aside their “feelings of being victimized by circumstances beyond their control,” Connors says, and realize that, “their power to change their circumstances resided within them.”

The characters in Oz exhibit a key leadership quality that Connors and Smith often discuss with their clients: accountability. “The topic of accountability is what we think will, over the next decade, become the preeminent way to improve business productivity,” says Connors. Each character in the film comes to terms with their limitations and takes responsibility for their actions.

Fickenscher says that Toto’s Reflections is now on the syllabi of business classes at George Washington University and Boston College. Maybe executives can learn something from a little dog, a girl with ruby slippers, a metal man, a cowardly carnivore, and an animated sack of straw. Then again, maybe it was all a dream.