In Belize, a curiously common address among fishy stock deals 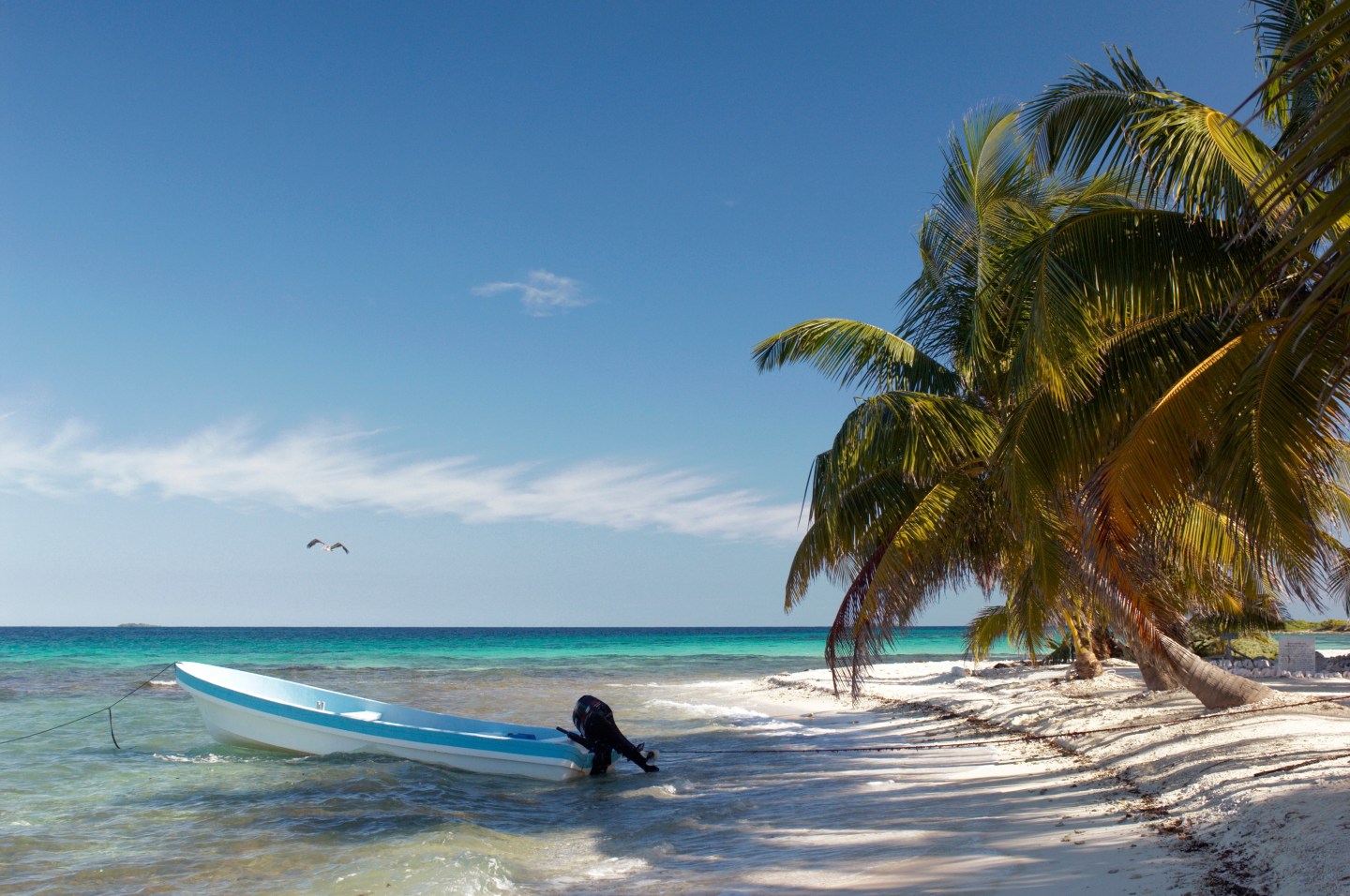 Some of the market’s most noteworthy recent cases of questionable stock deals seem to be coming from a single floor in a single office building in Belize City, Belize.

Two weeks ago, the Securities and Exchange Commission asserted in a lawsuit that two brothers, Mike and Andrew Affa, conspired with others to manipulate the stock of a company called Amogear, which claimed to produce clothing for mixed martial arts fighters, but the SEC says in reality did nothing.

The Affas, who are from New Jersey and New York, met in Boston to discuss their business plans with a friend and another person who, unbeknownst to them, was an FBI agent. When it came time to place the trades that would get the fraud rolling, though, the SEC says the Affas did it through a tiny offshore brokerage firm called Titan International Securities, which is located on the fourth floor of an office building called the Matalon in Belize City. The Affas have denied the SEC’s allegations. Titan is not a defendant in the suit.

Who else claims to be located on the fourth floor of the Matalon? None other than Cynk Technology, the no-asset, no-revenue social media company that attracted widespread attention this summer when its shares soared 25,000% to a $6 billion valuation. The SEC halted the stock, saying that there were signs of “potentially manipulative transactions.” Trading resumed on Friday, and the shares immediately plummeted, losing 85% of the value by the end of the day. Cynk could not be reached for comment.

Regulators have grown increasingly concerned about small company stock manipulation. A year ago, the SEC formed a microcap fraud task force, and it has since brought a number of cases. There is no evidence U.S. regulators are focusing specifically on international fraud or on activities in Belize in particular. At the same time, Belize has long been known as a place where American citizens can easily incorporate businesses to avoid U.S. regulations and taxes, and hide their ownership stakes.

FINRA, an independent securities industry regulator, has also been looking into a number of offshore brokerages that appear to be linked to “timely stock trades during apparent ‘pump and dump schemes,'” according to financial website The Deal. Among the firms FINRA was reportedly looking into was Legacy Global Markets, which, according to the company’s website, is, you guessed it, also located on the fourth floor of the Matalon building. Legacy could not be reached for comment.

Carlo Arguelles, co-owner of International Environments, the firm that developed the Matalon building, says the Belizean commercial real estate market lacks a large supply of high-end office spaces. The Matalon, which opened in 2010, is one of the few commercial buildings in Belize that exceeds three stories and also offers parking space. It is a six-story glass building that rises above neighboring junk-yard lots and one-story metal shacks. The building is located on the northern edge of Belize City, just outside of the downtown area, which, according to Maria Smith, a sales and accounts associate at real estate firm Century21 Belize, is the most desirable area in the city. The building is a five-minute walk from the ocean. Smith estimates that the average rent for a suite in the Matalon would range between $2,000 and $4,000 a month.

Arguelles said he does not believe that his building has become a magnet for stock fraud. In fact, Arguelles told Fortune that neither Cynk nor Legacy are tenants of the Matalon building. According to a receptionist at the Matalon, only three firms occupy space on the building’s fourth floor, including the Arguelles & Co. law firm, which is run by one of Carlo Arguelles’ cousins; IPC Corporate Services, which helps overseas businesses set up corporations in Belize; and Titan.

It’s unclear why Cynk and Legacy would claim to be located in the same office building in Belize or even on a single floor of a building. Despite some ties, Matalon’s fourth floor tenants—both the actual and the claimed—appear to be independent organizations. A spokesperson for Titan told Fortune that it has no connection to Cynk. Meanwhile, a report from Bloomberg Businessweek found that the brokerage firm held millions of shares of Cynk for clients earlier this year.

“We are not a primary shareholder, nor have we done business with them,” said Titan’s spokesperson, referring to Cynk. “Cynk tried to do business with us, but we rejected the deposit from Cynk. They didn’t meet our compliance requirements.”

According to Belize’s banking regulator, the International Financial Service Commission, Legacy Global Markets is a licensed securities trading firm. Legacy’s website describes itself as a full-service brokerage firm. But according to hotstocked.com, Legacy regularly pays websites and marketing firms to promote the shares of small company stocks. In June 2013, Legacy paid the owners of 123StockAlerts.com $56,000 to promote the shares of small silver mining company Promithian Global Ventures (PGVI) for two days, according to a disclaimer in an e-mail sent out by 123StockAlerts.com.

123StockAlerts.com is owned by Global Marketing Media, the same company that the Affa brothers allegedly hired to promote the shares of Amogear. According to the SEC, GMM is owned by Christopher Nix, who was named as a defendant in the SEC’s suit against the Affas.

The IFCS website lists Legacy’s address as suite 404 in the Matalon. According to the building, though, that address currently belongs to IPC Corporate Services, not Legacy. Legacy’s website does not list the firm’s owners or its management team.

A phone number for Legacy listed with IFSC goes to the law office of Marilyn Williams who, up until December 2013, headed Belize’s Financial Intelligence Unit, another local banking regulator. A paralegal at Williams’ office who would only give Fortune her first name, confirmed that Williams’ firm owns a number of offshore businesses, including Legacy. In a follow up conversation, the same paralegal denied that the firms are connected to each other. Williams did not offer comment to Fortune.

An IFSC official, who declined to give her name, said the agency relies on registering agents to provide accurate information. In general, financial regulation in Belize appears to be mostly voluntary. The IFCS website says that the agency relies on self-regulation, “meaning that while government sets overall standards, it expects much of the actual work in terms of monitoring and compliance to be done by the industry itself.”

Marilyn Williams’ law practice was previously run by Lionel Welch, a well-known figure in the Belizean financial community who died in February. Williams took over the firm when she stepped down from Belize’s Financial Intelligence Unit last year.

In 2011, Welch made local headlines when the Belize Department of General Sales Tax, in conjunction with local authorities, issued a warrant for Welch’s arrest after he failed to appear in court on charges that he failed to file his tax returns.

Welch also had ties to the world of U.S. penny stocks. According to an SEC filing, Welch was the largest outside investor of Tiger Oil and Energy, a tiny company that brings old oil wells back to life. Tiger hasn’t been very successful. The company has not brought in a dollar of revenue for more than four years. Nonetheless, Las Vegas-based lawyer Harold Gewerter helped the company raise $850,000 in a stock sale in 2012. Gewerter also appears to have played a major role in bringing social media wonder stock Cynk to life.

Gewerter told Fortune that he no longer works for Cynk. But in June, he sent a letter to the OTC Markets Group, an exchange for small companies, on behalf of Cynk. Gewerter said that he had personally met with Cynk’s then-CEO Javier Romero. He also said that Cynk was located at Suite 400 in the Matalon building. Suite 400, according to the Matalon’s receptionist, does not exist.

According to SEC registration filings, Andrew Godfrey and Robert Bandfield were also once major shareholders of Tiger Oil. Godfrey and Bandfield, unlike Cynk’s executives, do appear to work on the fourth floor of the Matalon building. Bandfield and Godfrey run IPC Corporate Services as chief officer and director, respectively. The company occupies suite 404 in the Matalon, the same address claimed to be occupied by Legacy Global Markets.

There appears to be no connection between Legacy and IPC other than the fact that they are involved in similar charitable efforts. Both IPC and Legacy are listed as donors on the website of LifeLine Foundation, which provides food and medical care to poor Belizean children. Titan is also listed as a donor.

Even though the Matalon is a hot commodity in the Belize business community, Arguelles said he worries that the building has been tarnish by the recent media spotlight on sketchy companies like Cynk.

“We don’t know who owns these companies, but we’re trying to clear our name on the local level.”

Editor’s note: A previous version of this story incorrectly stated that Marilyn Williams had been the head of Belize’s Financial Intelligence Unit until September 2013. In fact, Williams left her post as director of the FIU at the end of December 2013.