Why Emory sends its MBAs to a U.S. Army base for training 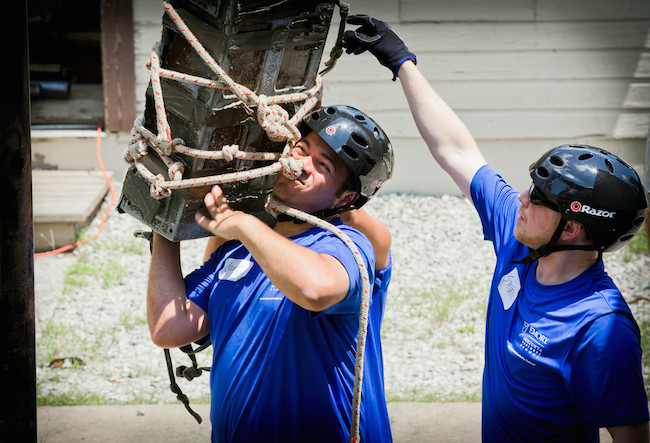 (Poets&Quants) — It’s not unusual for newbie MBAs at a business school to be tossed into a bootcamp for a day of team-building exercises. But Emory University’s Goizueta Business School has a twist on that old routine.

Emory’s MBA students literally head for the barracks—the U.S. Army barracks. The day-long outing is part of the one-year MBA “Leader’s Reaction” course, where students spend a day working together to conquer military-style obstacles. Although it’s not the first school to utilize military activities for learning purposes, Goizueta is one of the few that makes it part of a required course.

The location: The historic Fort Benning military base, about 90 minutes south of Emory in Columbus, Georgia, where the U.S. Army helps to prepare combat-ready troops.

The mission: gain and apply leadership skills via nine military obstacles, some of the very same grueling hurdles used to train members of the United States Army.

Addressing some 50 MBA students lined up like new recruits in basic training, Army Lieutenant General Ken Keen told them that the day’s exercises would not only test their physical strength but, more importantly, their mental toughness as well.

“There’s a good chance you’ll get wet today.” quipped Keen, humorously alluding to the makeshift moats that they were destined to plummet into at least once. “If not, we can accommodate that for you.”

Keen’s gentle joshing belies his record of commanding elite military units, including those in Special Forces, and leading soldiers on missions in Pakistan, Central America, South America, and Haiti. Keen, who joined the business school in 2013 as Goizueta’s associate dean of leadership development, spent 38 years in the U.S. Army.

His personal mission at Goizueta has been to prepare students for leadership at all levels through curricular and experiential learning. As a long-time Army commander, he was influential in getting Fort Benning to open its gates to Emory’s business school.

At Fort Benning, students divided themselves into teams according to the study groups they share in the classroom. And then they were off.

In nine groupings of about five to eight students each, the teams rotated between nine “lanes” which were separated by cinder block walls so the other teams couldn’t see what lay ahead in the next rotation. At each lane, a different student served as the team leader, receiving mission instructions from an Army facilitator. Once those instructions were given, it was up to the team leader to communicate the task to the rest of the group and lead them to complete the mission in 30 minutes or less.

Well, not exactly. Each mission contained “touch red your dead” obstacles and imaginary land mines that stood between the students and their goals. The students were also given very limited, ambiguous materials to use as resources. What’s more, each challenge required significant physical strength, adding another level of confusion when trying to determine how a team could collectively finish the mission. As if adding insult to injury, once the instructions were given, the military officers who served as the day’s facilitators quietly faded into the background. Any requests for help—outside of repeating the original instructions—were blatantly ignored.

So, how does all of this translate to the business world? “I’m focused on our students’ re-entry into the workplace,” says Emory leadership professor Peter Topping. “When they leave Goizueta a year from now, most of them will return to the workforce as managers or they’ll be on the management track. Therefore, it’s important for them to be able to foster team work and to deal with ambiguity.” Topping also pointed out that the day’s exercises were ultimately about self awareness. “To lead others, you start by leading yourself better.”

Wondering how well Emory’s MBAs performed when they were brought on base and challenged military-style? Like many MBAs, they exhibited creativity and perseverance. Many failed to plan effectively before tackling an obstacle. Some spent too little time assessing what was before them. Others spent too much time looking at the obstacle, leading to the kind of analysis paralysis that is pervasive at big companies.

After a long day under a hot Georgia sun, the MBAs (who, by the way, just started their program two months ago) were more energized than when the day first began. Sure, hardly any of the obstacles were defeated, but the students undeniably left Fort Benning with new perspectives.

Reuben Weislogel, who worked in investment management before enrolling at Goizueta, said he learned more about his personal leadership style. Having the opportunity to lead a mission and to see how others led, “I learned that my leadership style is to set up the situation, lay out the task and tools, ask for input, and then execute.”

Nicole Bullock, who had worked as a human resources specialist for International Paper, enjoyed seeing her fellow classmates take on leadership roles and said she saw the importance of quickly adjusting one’s leadership style based on the task at hand.

That’s music to Keen’s military ears. “We can create a general template, but effective leadership development requires a level of self-awareness and commitment,” he says. “Our goal is to prepare students for leadership at all levels. Leadership doesn’t come through osmosis. Students must get out there and put their skills and abilities into action.”