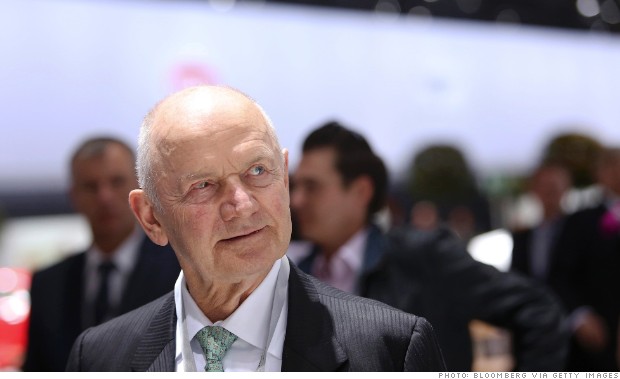 German auto giant Volkswagen AG (VLKAY) is considering an approach for Fiat-Chrysler (FIATY) in an effort to strengthen its presence on the U.S. market, according to a report in the German montly Manager Magazin.

Manager said that Ferdinand Piech, VW’s largest individual shareholder and a scion of the company’s founding dynasty, had already had “various conversations with the Agnelli and Elkann families, his counterparts at Fiat.

The move would aim to use Chrysler’s nationwide presence to bolster the sale of its own core VW brand stateside, at a time when the U.S. market is looking a lot stronger than VW’s home markets in Europe. VWs accounted for only 2.2% of all cars sold in the U.S. in the first half of this year, down from 2.6% a year earlier. Chrysler’s market share jumped to 12.5% from 11.6% in the same period.

For Fiat, Italy’s national champion that also owns the Lancia, Alfa Romeo and Maserati brands, it would offer the prospect of an exit from the mass-production of cars after over 100 years–and only five months after it completed the takeover of Chrysler, the latest in a long series of attempts to revive its profitability.

Manager said Fiat’s management and core shareholders, the Agnelli family, want to concentrate on the elite Ferrari brand, although that is likely to be one of the key assets desired by VW.

Under the aggressive leadership of chief executive Martin Winterkorn, VW has bought sports car maker Porsche and the truckmakers Scania and MAN since 2007, but Winterkorn had said in March he didn’t intend adding to the group’s 12 brands.

Winterkorn had earlier this week told VW managers he wanted to achieve €5 billion a year in annual cost savings by 2018 to restore the profitability of the flaghship VW brand, where operating margins have fallen below 2%.

Nobody at Volkswagen was initially available to comment on the report.

Fiat’s shares were up 2.7% by midday in Italy in reaction to the news, while Volkswagen’s were down by the same amount.