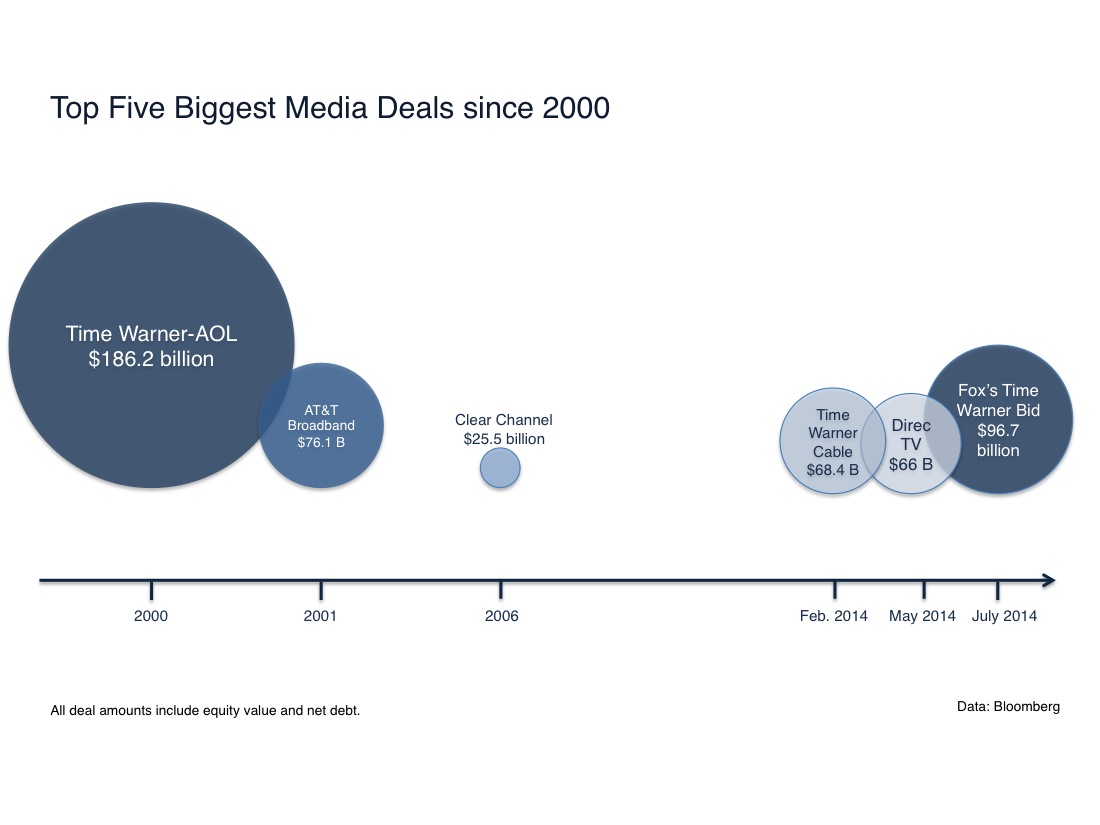 Twenty-First Century Fox’s (FOXA) attempt to buy Time Warner (TWX), which came to light Wednesday, would be the second-largest media deal ever, trailing behind Time Warner’s ill-fated merger with AOL in 2000.

That status isn’t exactly enviable, given how the $186.2 billion AOL-Time Warner combination blew out in spectacular fashion: After billions in losses, Time Warner eventually spun off AOL (AOL) in 2009.

But the gap between the two mega-deals could narrow before the deal gets done.

Time Warner’s board shot down the $85-a-share offer, saying that its future standalone value will be “superior to any proposal that Twenty-First Century Fox is in a position to offer.”

Murdoch isn’t so sure about that. He’s willing to take Fox’s offer higher, at least if Time Warner is willing to open its books and engage in talks, Bloomberg News reported.

Fox calculates that the merged company could open the door to more than $1 billion in cost savings. It would include valuable media properties such as TNT, TBS and HBO cable networks. On its own, HBO is valued at $20 billion, according to Bloomberg.

Beefing up its cable network holdings could also give Fox more negotiating power with distributors, helping rack up savings. That could potentially make the $96.7 billion (or higher) price tag–which includes the $80 billion bid value plus about $16.7 billion in Time Warner net debt–worth it to Murdoch.

How high he’s willing to go to add Time Warner to his sprawling media empire is yet to be seen.

Here are the biggest media deals since 2000:

3. Time Warner Cable to be bought by Comcast for $68.4 billion, yet to be completed

4. DirecTV to be bought by AT&T for $66 billion, yet to be completed

5. Clear Channel sold for $25.5 billion to a consortium of buyers led by Bain Capital

(Note: All deal values above are transaction values: the equity value plus the acquired company’s net debt.)