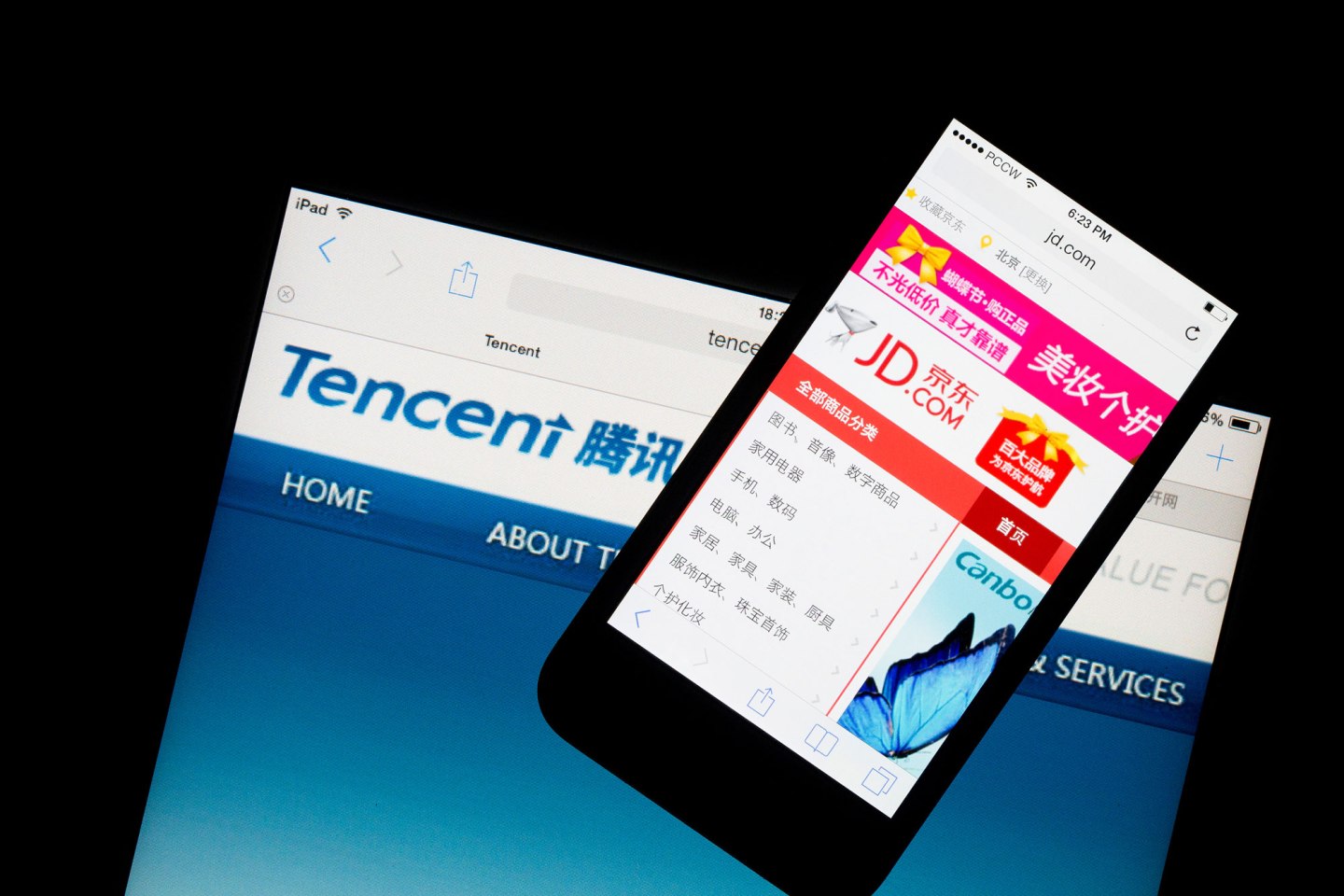 The JD.com website is displayed on an Apple Inc. iPhone 5s on top of an Apple iPad displaying the Tencent Holdings Ltd. website in this arranged photograph taken in Hong Kong, China, on Monday, March 3, 2014. Tencent, Asia's largest Internet company, agreed to buy a 15 percent stake in Chinese e-commerce company JD.com for $214.7 million as it steps up its challenge to Alibaba Group Holding Ltd. Photographer: Brent Lewin/Bloomberg via Getty Images
Photograph by Brent Lewin — Bloomberg/Getty Images

One of the great ironies in China today is that the spoils of the country’s tech highflyers—Tencent Holdings Ltd (TCEHY), Weibo Corp (WB), Sina Corp. (SINA), Baidu (BIDU) and JD.com (JD), to name just a few stock market stars —are largely going to foreigners.

It’s tough to know exactly how much of the stocks foreigners own. The complicated structures Chinese companies use to skirt China law that makes foreign investments in tech illegal (more on that in a second) also obfuscate exact ownership levels. But even by fairly conservative estimates, foreigners own a lot. And they’re richer for it.

The South African media company Naspers paid $34 million for an early stake in Tencent that’s now worth more than $40 billion. Yahoo’s $1 billion investment in Alibaba back in 2005 is worth around $30 billion. And Baidu’s IPO in 2005 made many U.S. venture capitalists very rich.

But what’s striking today is that, aside from the stock owned by the Chinese companies’ founders and insiders, many of the shares of these companies are owned by foreigners. Essentially, Chinese tech companies are foreign-owned—the result of Chinese laws making it illegal for most Chinese to own the stocks of their country’s best performing companies.

Foreigners were first able to own Chinese tech upstarts through something called a variable interest entity (VIE), first created for Internet portal Sina’s IPO in New York in 2000.

The VIE was an accounting gimmick to get around China’s rules limiting foreign ownership in industries the government deemed sensitive, such as technology. Under the laws, foreign investors are usually not permitted to own more than 50% of equity in a “value-added” telecommunications company.

To get around this, bankers set up VIEs in tax havens like the Cayman Islands and linked them to Chinese companies in the mainland. This allowed foreign investors buy shares in the VIE instead of the mainland Chinese company directly.

“It is one of the problems with the Cayman Islands/VIE structures used in this sector,” observes Paul Gillis, a professor at Peking University’s Guanghua School of Management who runs an influential accounting blog from Beijing. “They force an overseas listing that precludes Chinese from becoming shareholders.”

This is why even by conservative guesses, the majority shareholders of China’s tech names are foreigners.

Take Tencent, the $145 billion company behind China’s most popular app, WeChat. The South African media company Naspers has a stake of about 35%, according to its website. After that, Chairman “Pony” Ma and a co-founder own about 16% of the company. Most of the rest of the equity is owned by people outside mainland China.

Once the company IPOs in New York in what’s being hyped the largest public offering ever in the U.S., dozens of Alibaba insiders will earn Internet riches by selling their stakes to buyers in public markets. Those buyers will undoubtedly be located outside China.

The unfairness of regular Chinese investors not getting to buy into the country’s hottest companies doesn’t go unnoticed in China. A Chinese book titled “The Historical Truths 99% Chinese Don’t Know” released in 2011 includes a chart purporting to show that Japanese, American, and South Africans owned more than 85% of Sohu, Baidu, and Tencent, respectively.

The chart is hyperbole. But in China, the sentiment is not.