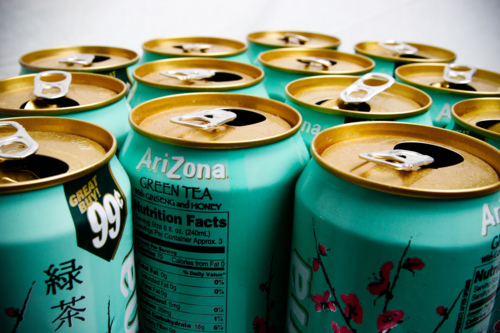 AriZona iced tea—the drink sold in those trademark $0.99, 24-ounce cans—was concocted by two buddies in Brooklyn in 1992. More than two decades later, the drink that’s ubiquitous in city bodegas and suburban convenience stores is at the center of a six-year, knock-down, drag-out battle between the men who created it.

Last week marked the end of a six-week non-jury trial that will likely determine AriZona’s future. While the trial in Mineola, N.Y. was technically about the value of AriZona iced tea, it also served as a comprehensive illustration—complete with mudslinging and name-calling—of how a successful business relationship can go so, so wrong.

The Woodbury, N.Y.-based AriZona is the creation of John Ferolito and Domenick Vultaggio, who, prior to founding the beverage company in 1992, sold beer together out of the back of a Volkswagen. Capitalizing on their working relationship and the growing ready-to-drink tea trend, they built their tea into a booming beverage company with 1,000 employees and sales of $1 billion a year.

AriZona continues to grow (9.3% in 2012) in the current soda-averse beverage market, but the partnership that bore the brand ended long ago—right around the time the current court battle began.

In addition to having a popular product, AriZona’s two founders also had developed a well-balanced working relationship: Ferolito handled the company’s financial matters while Vultaggio was in charge of its warehouse operations. When Vultaggio wanted to have more involvement with the business, the duo initially butted heads before eventually deciding that Ferolito would take a step back from the company and move to Florida, leaving Vultaggio to handle day-to-day operations.

That worked for a while, until 2005, when Ferolito began to explore selling his share of the company. He considered the sale, his lawyer Nicholas Gravante of Boies, Schiller & Flexner says, because he wanted AriZona to gain access to distribution networks outside the United States. He found a suitor in India-based Tata Global Beverages, which had valued his half of the company at $2.25 billion.

But standing in the way of the sale of Ferolito’s shares was the agreement he’d signed when he ceded daily control of the business to Vultaggio. The agreement said that both men had to consent to any transfer of company stock to outsiders. Ferolito filed a lawsuit, asking a judge to rule the agreement unenforceable, but he lost the case.

Vultaggio eventually decided to exercise his right under New York state law to buy out Ferolito.

Instead of breaking the impasse, Vultaggio’s interest in purchasing Ferolito’s stake sparked a debate over just how much the company is worth. It’s that question that sent the two sides to a Mineola courthouse for a lengthy trial that ended last week.

Ferolito’s lawyers said in their opening arguments that bids to buy AriZona from companies like Tata, Nestle, and Coca-Cola (KO) put the value of entire company at as much as $4.5 billion. “Fair value is equal to what a willing purchaser would pay for AriZona,” Gravante argued on Ferolito’s behalf. Meanwhile, Vultaggio’s attorney Louis Solomon of Cadwalader, Wickersham & Taft, contended that the company is worth about $426 million since the offers for AriZona weren’t binding.

While a six-week trial to decide the value of an iced tea company may sound a little sleepy, the accusations that the feuding co-founders lobbed against each other in court were anything but.

In his opening argument, Ferolito’s lawyer said that Vultaggio “jerked” Ferolito around and “sabotaged” earlier bids for AriZona as part of a “war of oppression against Mr. Ferolito.” In vetoing an offer from Nestle, for instance, Vultaggio “pulled the rug out from under” his former business partner, the lawyer said.

Vultaggio acted in a such a fashion, Gravante said in court, because after realizing how much AriZona was really worth, he had one goal in mind: to “drive [Ferolito] into submission so that one day [Ferolito] would give up and sell for cents on the dollar his 50% interest.” Gravante told Fortune that in the years spent arguing over the value of the company, Vultaggio has “financially starved” his estranged co-founder.

Vultaggio’s lawyer, meanwhile, accused Ferolito of “believing he’s the son of God on Earth” and blowing his money on boats and gambling. That behavior has made Ferolito’s son—the beneficiary of a trust that holds 24% of the senior Ferolito’s stake in AriZona—the seventh largest tax delinquent in New York State. The suggestion that AriZona is worth $4 billion is “fantastical,” Solomon said. Paying that much for Ferolito’s share would lead AriZona into bankruptcy. It’s been Ferolito’s “hope and dream and wish for the last seven years” to put AriZona “out of business,” Solomon argued at trial.

In an interview with Fortune, Solomon accused Ferolito of intimidating Vultaggio and AriZona’s employees, in one instance entering AriZona’s headquarters alongside former New York City Police Department Detective Bo Dietl and other “armed men.” “Employees were running scared,” Solomon said. Ferolito’s lawyer Gravante, meanwhile, said in an interview that Ferolito had hired Dietl as security and that no one had ever displayed guns (though Dietl confirmed at trial that he and his men were armed.) “It was a cordial meeting,” Gravante said of the incident.

Though the trial gave the co-founders six weeks to air their grievances, its conclusion didn’t resolve much. Both sides still need to file closing briefs prior to a final hearing in September. A judgment is expected shortly after that.

The trial did prove one thing, though: even business partnerships forged by friends over sweet tea can go sour.

Editor’s note: A previous version of this story incorrectly stated that John Ferolito was the seventh largest tax delinquent in New York State. In fact, Ferolito’s son, as the beneficiary of a trust that holds 24% of the senior Ferolito’s stake in AriZona, owes the back taxes in question.