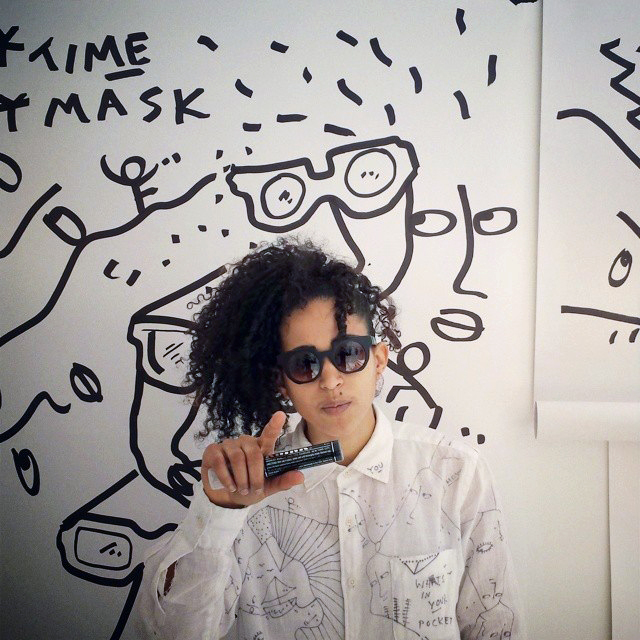 Growing up was kind of tough. I grew up in a predominantly white, working-class area, and I was tan with an Afro. Drawing was something I initially did as an escape, to deal with issues that I had as a kid.

I went to an art school in London. In 2003 I moved to Japan to teach English. I lasted seven months and then I quit. I made friends and I started to draw. A friend asked if I could do some drawing at one of his events. Around 2004 I did my first gig. There was an avant-garde Japanese noise band playing, and I drew to their music. That’s when I realized I’m a performer because I love drawing in real time with an audience, not knowing what’s going to happen. I started doing this at clubs. I used my laptop connected to a drawing tablet and some simple software. I projected it. At the time, I called it Live Club Illustration, and it became extremely popular in Japan.

In 2008 I came to New York. I naively thought that my career would transition here. Things didn’t fall in my lap as I thought they would. I realized I would have to create my own opportunities by using what I had access to. I started to do my own events. I’d call up friends [and ask for spaces if they had them]. I started to pick up pens again. I can draw in a performance way so people can come and watch me. It’s important that the audience is a part of the work.

I started Instagram later than most people. I don’t have any traditional photography experience, but I like taking pictures. There are definitely Instagram moments in my work. When I’m working, a part of me says, “That’s a really great Instagram moment.” I try to post once or twice a day.

Instagram connects people and builds communities. You’re starting to see working relationships happening because of people who are aware of one another’s work from Instagram.

I have shows and events. I get hit up a lot by people who say, “I discovered you on Instagram and I like your work.” Then they’ll have a pitch or job for me. I’ve met a couple big clients through Instagram.

ADVICE: Your Instagram is a reflection of you. It’s important for your personality and interests to come through. If you let that shine through, other people will be interested.