Should you go direct? 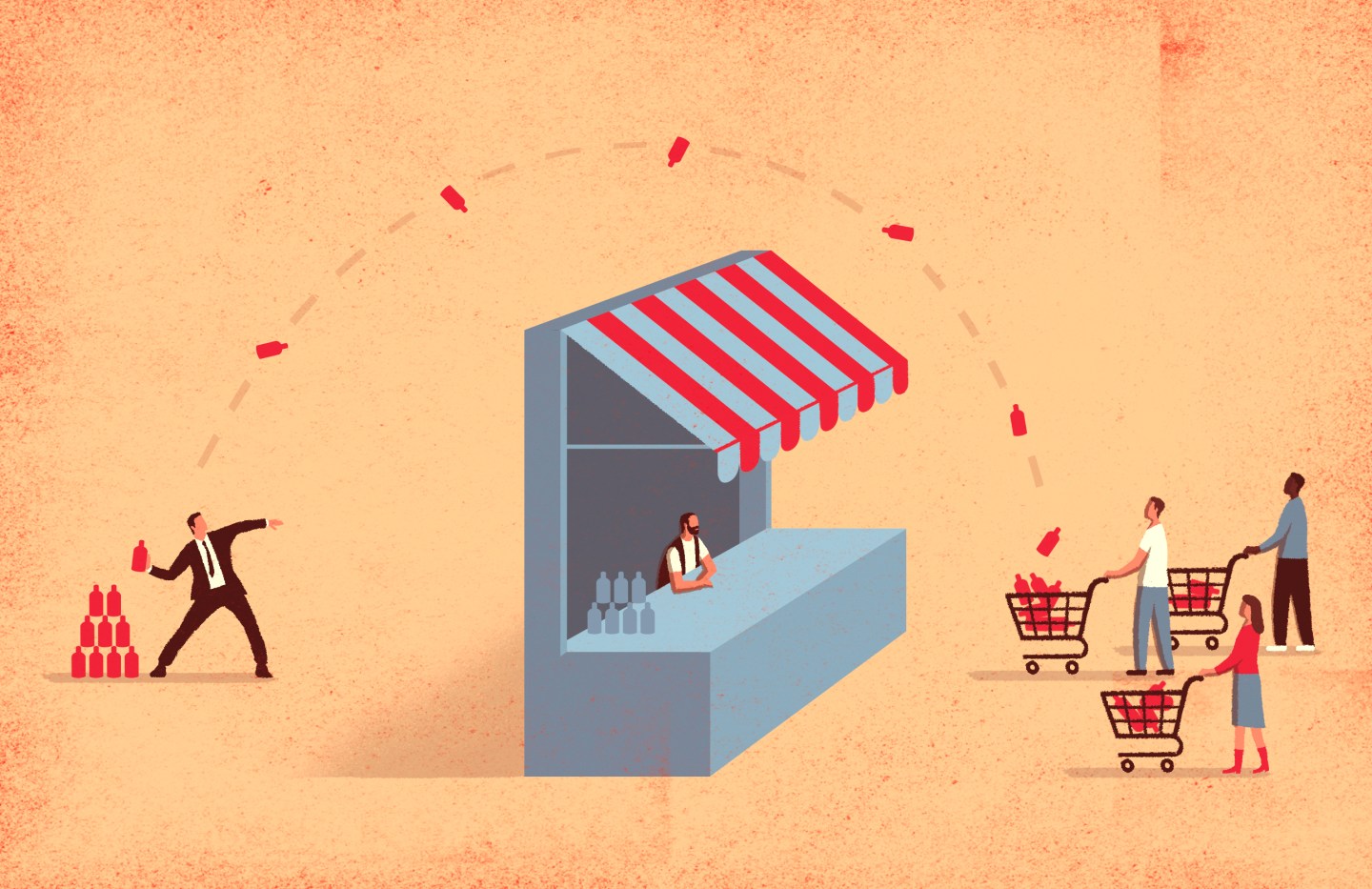 Fourteen years after starting Boulder-based skin-care company Pangea Organics, Joshua Onysko achieved what many entrepreneurs dream of: international distribution in chains like Macy’s and Whole Foods. But it turned out to be anything but a blessing. Says Onysko: “It was a nightmare.”

Retailers saddled Pangea with a punishing litany of charges, with chains charging, variously, for in-store promotions, demonstrations, and shipping to customers. That came on top of the 20% of gross prices that the stores took to sell Pangea’s products and the 10% that went to the company’s brokers. All told, Pangea paid 77% of its revenues to its 2,800 retail outlets and distributors. (A Whole Foods spokesperson notes that the chain doesn’t charge distribution and demonstration fees; Macy’s had no comment.) “There was no money to be made,” Onysko says.

So in April 2013 he made a radical decision: Onysko pulled Pangea’s products from store shelves and turned the company into a multilevel marketing enterprise. Today the company sells through “beauty ecologists,” commission-only freelancers who can buy a product kit; tout, say, Pangea’s French Rosemary facial toner to friends via social networks; and ring up sales with their own websites. “It was the biggest pivot ever for us,” he says. Instead of ceding 77% of its revenues for distribution, Onysko says his company now pays 50% of its revenues for commissions and distribution.

Initially Onysko was skeptical of such a shift. As he puts it, there’s an “ewww feeling” about multilevel marketing. Direct or multilevel selling–both methods use customers to sell to other customers; the latter term refers to a method in which sellers get commissions not only from their own sales but also from sales made by other sellers they recruit–has long been used successfully by the likes of Avon, Tupperware, and the Pampered Chef.

But the MLM model also has a reputation sullied by a history of pyramid schemes, get-rich promises, and fraudulent claims about products and compensation. The Federal Trade Commission is investigating supplement seller Herbalife for an alleged pyramid scheme. (The company has said its sales practices are fully legal and legitimate.) And Avon has experienced different struggles: Its sales have slumped and it has announced a tentative agreement to pay $135 million to the U.S. Department of Justice for allegedly paying bribes in China and other countries.

“It’s a bit of a sketchy industry,” admits Veeral Rathod, co-founder and CEO of J. Hilburn, a seven-year-old Dallas men’s custom-shirt maker that uses a multilevel marketing model. “That’s been one of the most interesting challenges that we have faced.”

Yet as online tools and social media make it easier to sell to friends, J. Hilburn and Pangea are among a growing number of young companies embracing the model as a more efficient way to build revenue, reduce overhead and inventory costs, and tap into loyal customers’ networks of friends.

“It’s crowdsourced marketing and distribution–putting your products into the hands of people who care about your products as much as you do,” says Lori Bush, CEO of Rodan + Fields, a San Francisco skin-care company that removed its products from stores in late 2007 and has since seen annual sales explode from $4 million to $200 million. Says Bush: “Department stores are not as conducive to helping a new product break through.”

U.S. direct selling increased 3.3% last year, to $32.7 billion, and the number of people selling by that method grew 5.7%, to 16.8 million. “There’s a definite uptick,” says Kevin Grimes, an attorney whose Idaho firm Grimes & Reese has worked with 2,000 direct-sales companies. In just the first four months of this year, he’s seen double the clients he did in the same period a year ago. Others say they’re seeing more interest in direct selling too. “I think there is going to be a massive shift in the next two years,” Onysko says.

He’s not the only one who sees efficiencies and reduced costs in selling direct. By relying on 3,000 commission-only “stylists” to sell and take measurements, J. Hilburn can cut out retailers, buy fabric direct from factories, and produce clothes in-house. That allows the company to offer custom shirts for half the $300 charged by typical high-end retailers. Hilburn’s sales jumped 30% last year, and CEO Rathod expects revenues to grow 40% this year to $60 million.

Then there’s Origami Owl, a jewelry company started four years ago in Phoenix by Bella Weems, then 14, and her mother, Chrissy. Bella wanted to earn enough money to buy a car when she turned 16. So the teen and her mom sold transparent “living lockets” (which can be customized with charms inside of them) at a mall kiosk one holiday season. Soon they were inundated with requests from across the country.

The Weemses considered opening many kiosks but didn’t want the burden of staffing, payroll, and dealing with inventory. They decided to grow through home-party sales instead. Using 60,000 “consultants,” Origami Owl doubled its revenue to $250 million last year, according to the Weemses.

Direct sales can speed up the path to profitability, argues Izze Beverage Co. co-founder Greg Stroh. He struggled a decade ago to turn a profit when nurturing Izze to $25 million in sales; it was still in the red when PepsiCo bought it in 2006. Stroh says retailers and distributors took up to 70% of revenues. “It was either jack up the price or lose margins,” he says. “The stores and distributors can suck you dry.”

Today Stroh and business partner Alex Bogusky are embracing direct sales with their latest startup, Skoop, which makes powdered nutrition drinks. They’re selling through fitness enthusiasts, trainers, Pilates instructors, and yoga studios, as well as some nontraditional fitness retailers. Loyal customers can earn extra cash–a 25% commission on $55 bags. As a result, Skoop has kept its inventory lean enough that it needs only one warehouse, one truck, and just nine employees. In its first year, Skoop has drummed up $1 million in sales and expects to be profitable by the year’s end.

There are some downsides to direct selling. Companies rely on salespeople who work only when they want. Moreover, their freedom makes the brand message that much harder to control.

Companies should invest heavily in sales-force training and education, Grimes says, offering clear rules of what is permissible, monitoring them diligently online and off–even hiring private investigators and secret shoppers–and imposing appropriate consequences when someone crosses the line. “Regulators are circling,” he says.

To keep people from focusing on recruiting instead of selling products, J. Hilburn limits the size of a team a sales consultant can build and restricts how many people can sell in one zip code. The clothier also tries to motivate hobbyists and top sellers by engaging them with conferences, leadership training, monthly videos, and updates on products, sales, marketing, and technology. “The more we integrate our stylists into our business strategy,” Rathod says, “the more they feel like field employees rather than independent consultants.”

Switching to an MLM model has paid off for Pangea. A year after the change, it has maintained its previous $10 million in annual revenues and improved profit margins by 15% to 20%. One beauty ecologist sold $15,000 worth of items in a month, more than any single retail store previously did for Pangea.

The change has also reinvigorated Onysko. Instead of flying across the country to meet with indifferent store buyers who sometimes forgot he was coming, he says, he now holds energetic meetings with 40 passionate customer/sellers. “When you have that direct connection to consumers,” he says, “it’s much more meaningful.”

Do you have what you need to go direct? Take the quiz below and find out.
[scribd id=232294904 key=key-rsY18gPFrwkR4gYriOFs mode=scroll]