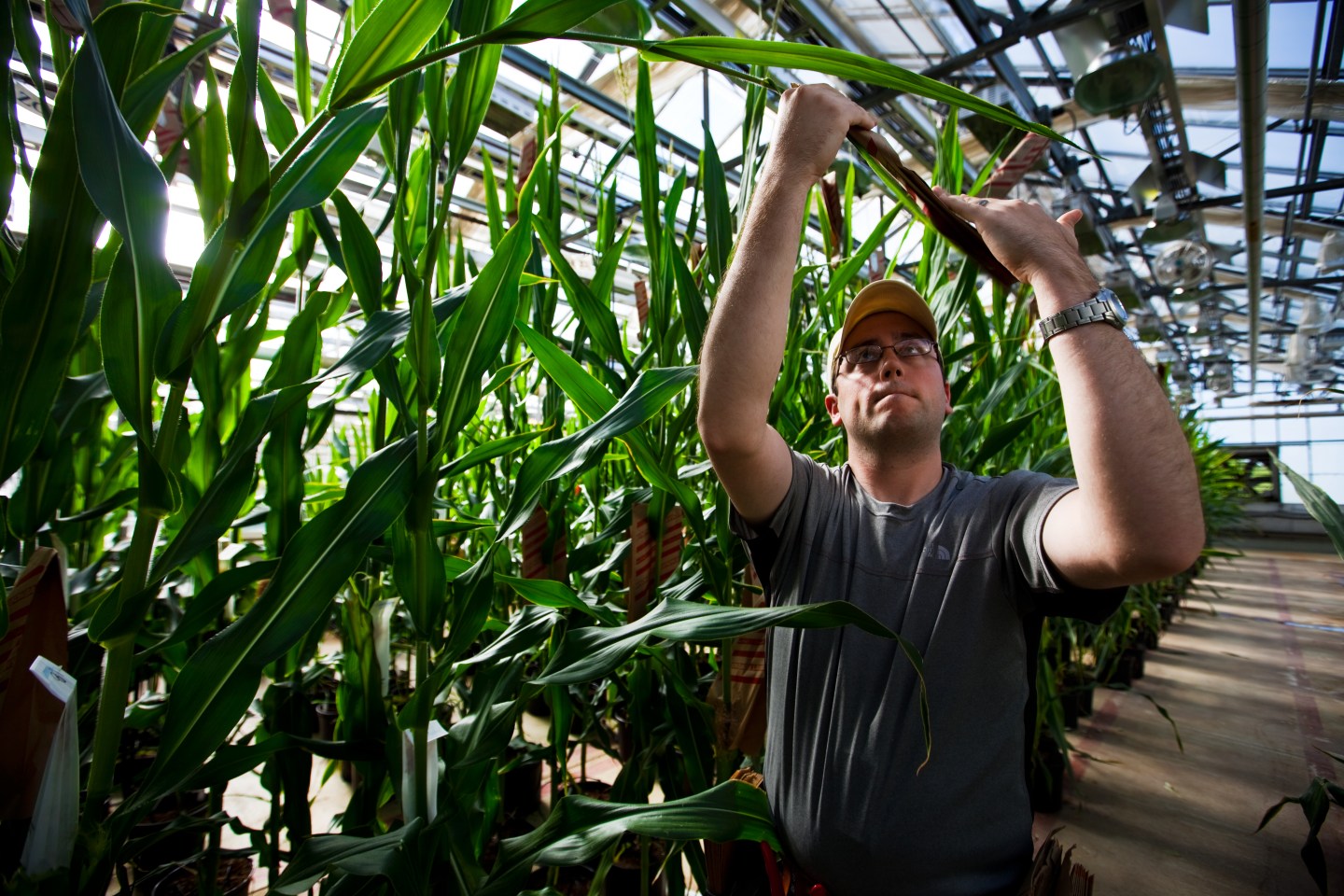 All those Facebook memes featuring Willy Wonka and The Most Interesting Man in the World warning that genetically modified crops will kill us all have done little to help the anti-GMO cause. Most recently, activists have been fighting to force food companies to affix warning labels to products that contain GMOs. Whether they win or lose won’t matter much, because Monsanto, the world’s largest seed company, is an unstoppable Leviathan, and GMOs are here to stay.

The beside-the-pointness of the labeling movement is made starkly plain by a glance at Monsanto’s financials. The company on Wednesday reported a drop in earnings of nearly 6% in the third quarter, but its stock soared by more than 5%. The company also announced it will buy back $10 billion worth of shares over the next two years, and, more to the point, declared that it expects to at least double its profits by 2019, thanks almost entirely to its seeds and genomics businesses.

None of this is particularly surprising, except perhaps to some of the meme-spreaders. And it’s all happening despite more-serious resistance to GMOs across big swaths of the globe.

Monsanto (MON) makes money almost no matter what. If its corn business sinks, as it has this year, it makes up for some of the losses by selling more soybean seeds (many farmers tend to switch between the crops depending on market conditions). If rivals gain market share, it often makes money from the technology licenses it sells to, for example, DuPont (DD), its chief competitor (and, as a licensee, one of its biggest customers). When its patents expire, it sells farmers on the newer seed varieties it is constantly pushing through its pipeline. The company is hedged to the hilt: seemingly, any loss is also a potential gain.

That’s especially true when it comes to anti-GMO sentiment and hard-to-crack international markets. Europe is blocking sales of seeds and traits? Open markets in a more-receptive South America, where growth prospects are much bigger anyway. China is closing off its markets out of feigned concern about GMOs? Pour more resources into India.

In the United States, the anti-GMO movement is almost laughably impotent, despite the headlines it manages to regularly snag. GMOs are overwhelmingly dominant here among the major crops, representing more than 90% of corn, soybeans, cotton, sugar beets, and canola. And Monsanto holds huge shares of those markets — about 80% of U.S. corn and more than 90% of U.S. soybeans are grown with seeds containing Monsanto’s patented seed traits (whether sold by Monsanto itself or by licensees). In all, the company holds about 1,700 patents. In 2013, Monsanto racked up sales of $14.9 billion. Of that, $10.3 billion came from seeds and genomic traits.

GMO crops took up about 1.7 million hectares soon after they were introduced in 1996. Acreage has grown at an average clip of 10 million hectares a year, according to the International Service for the Acquisition of Agri-Biotech Applications, and are now up to 175 million hectares, with no signs of abating. And Monsanto is either leading most of these markets, or is in close competition for them.

The upward trajectory isn’t just luck, and it isn’t just a friendly political climate in the United States (though that has surely helped). For such a big company, Monsanto is nimble, and able to turn on a dime when necessary. For instance, when profits sank during the last recession, the company quickly disinvested in its Roundup herbicide line, which was being quickly replicated by cheaper, generic versions, and shifted more focus to its core seed business, which represents about 70% of the company’s sales. Profits have bounced back in a big way, with net margins at about 30%.

Meanwhile, the company is looking far ahead with investments in farm-productivity products such as data analytics. It purchased Climate Corp. last October for $930 million for its to boost its analytics portfolio. Farmers representing about 40 million acres in the United States (about 20% of corn and soybean acreage) are now using the company’s analytic products, about double what the company had earlier forecast.

For several years, Wall Street had been skittish about Monsanto’s prospects, in part because of the loud opposition to GMOs. No longer. Just over the past few quarters, analysts have been ratcheting up their target prices. Wells Fargo did so after the company’s first quarter results were announced. J.P. Morgan followed in April after another successful quarter. On Wednesday, Citigroup’s P.J. Juvekar called Monsanto “our favorite name in ag,” and set a price target of $125 — which was quickly surpassed in the day’s trading. (On Thursday, shares sank slightly, but were still trading just above $125.)

Such sentiments are also found on the buy side. In May, Larry Robbins of the hedge fund Glenview Capital Management insisted during the Sohn Investment Conference that Monsanto’s shares — then trading at about $110 — were way undervalued. Though he complained about Monsanto “hoarding capital” with its $15.8 billion in “dry powder” (cash), he enthused about the company’s prospects. It enjoys “massive barriers to entry” and “perpetual local monopolies” thanks to farmers basically signing on with Monsanto for life. He noted that while “corn demand will double” over the next 15 or 20 years, “acres won’t,” necessitating far greater yields. “In the real world, we cannot solve world hunger on an organic basis,” Robbins said.

Clearly, not everybody agrees with that assessment, but Wall Street sure seems to. And so do farmers.