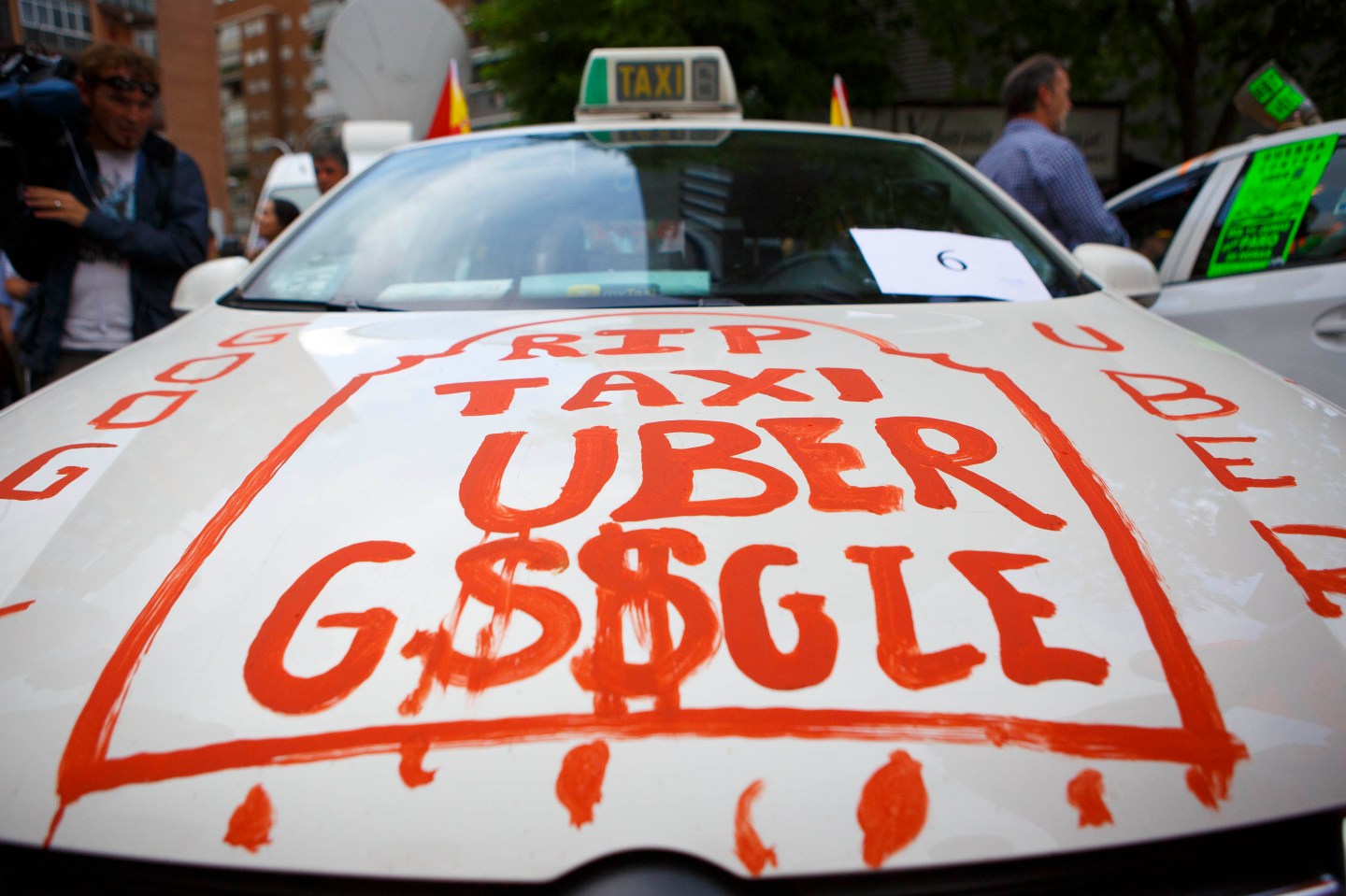 Some of Europe’s biggest cities ground to a halt Wednesday as thousands of taxi drivers organised protests against Uber Technologies Inc.’s invasion of their ancient fiefdoms.

Cab drivers from London to Madrid blocked selected streets in a coordinated protest against a company which they say is destroying their livelihoods after getting preferential treatment from their regulators.

In London, an estimated 12,000 cabs concentrated around Trafalgar Square and Whitehall, snarling the most important traffic hub in the city center, while in France, licensed taxis blockaded the approach road to Marseille’s Marignane airport by slowing to a crawl, forcing passengers to walk the last part of their journey in sweltering Mediterranean heat.

The coordinated protests highlight the depth of feeling against the San Francisco-based company and its ranks of Silicon Valley backers, whose mobile app conveys client booking requests to its network of private cab drivers.

“Huge and wealthy multi-national corporations like Google (GOOG) are trying to use their financial clout to bully their way into areas that have been governed by Private Hire Laws in London for decades and which have delivered safe, reliable and efficient services for Londoners down the years,” said Mick Cash, Acting General Secretary of the RMT labor union.

He said the disruption caused on Wednesday “will be nothing compared to the disruption and dangers of allowing our licensed taxis to be driven from our streets through a combination of ignorance and greed.”

“It’s disappointing and sadly predictable that “old taxi” is bringing our city to a standstill, just to avoid having to compete,” Jo Bertram, Uber’s general manager for the UK and Ireland, countered in an e-mailed statement.

The sight of the RMT, whose subway train drivers routinely inflict misery on millions of London commuters with strike action (next one due in two days’ time), siding with the licensed cab drivers is just one of the things that suggest the action will play into Uber’s hands.

Londoners’ reactions on Twitter appeared to be overwhelmingly in favor of Uber, with comments such as “Expensive black cabs killing themselves. Good job!” and “The taxi strike in London is the best bit of PR #Uber will ever get” being typical.

The Uber app, meanwhile, leaped to the top of the most-downloaded free apps in Spain, and was number 3 in the UK, according to Apple’s iTunes store rankings. Bertram said the number of new customers signing up for its app Wednesday was up 850% from a week earlier, helped along by an opportunistic promotional offer to new users.

However, the company’s progress in Europe is far from assured. Court injunctions mean it cannot operate freely in Brussels and Berlin at present, and London’s cabbies have also filed suit against it on the grounds that the app is, to all practical purposes, a taximeter. Under UK law, only licensed cabs are allowed to use them. Uber disputes this, but in a blog posted earlier on the company’s website to explain how the service works, Bertram herself said: “The meter will start at the time that the taxi arrives at pick up.”

Transport for London, the body that licenses cabs, is also concerned that the company has failed to clear up where its domicile is. Chief Operating Officer Garrett Emmerson told ITV television that TfL could revoke its license if it can’t prove that it has a UK domicile. Uber, which only accepts online payments, currently routes payments for London trips through Amsterdam in the Netherlands.