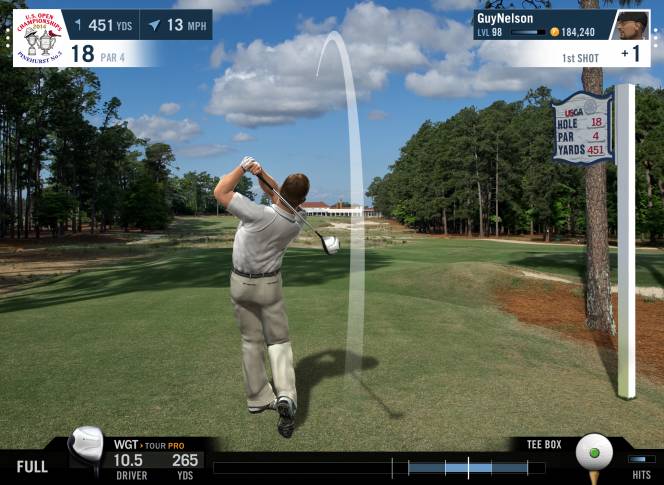 A record number of golfers will be playing Pinehurst No. 2 this June with hopes of shooting the best score on the fabled–and recently redesigned–course. The goal is to emerge victorious in the 2014 U.S. Open and take home the trophy, as well as the honor that will live on in history. But not all of this year’s golfers will actually step foot in North Carolina to partake in the championship events (the Men’s and Women’s tournaments will take place back-to-back June 12-15 and June 19-22).

Through a partnership between the United States Golf Association (USGA) and WGT Media, creators of the free-to-play World Golf Tour, anyone with a PC or iOS mobile device can partake in the Virtual U.S. Open Championship. In addition to winning a trip to the 2015 U.S. Open at Chambers Bay with behind-the-ropes access, the winner will receive a replica trophy and get his (or her) name in the official USGA record books right alongside the real golfers.

While this is the first year the competition has been opened up to mobile gamers, it will mark the sixth year of the Virtual U.S. Open. Sarah Hirshland, senior manager of business affairs at the USGA, admits that when the organization first started the video game competition they weren’t sure how enthusiastic people would be for it.

“It was an enormous investment from both organizations because of the preciseness of the graphics and the experience,” said Hirshland. “WGT Media has to build a different golf course each year, which is one of the things their audience loves the most. And because a lot of the U.S. Open courses are at private clubs like Merion [Pa.] last year, the game offers fans a chance to play the course for the first time.”

Nearly a quarter of a million people competed in last year’s Virtual U.S. Open, playing 3.3 million virtual rounds on Merion Country Club. That’s up from 1.2 million virtual rounds played in the first edition of the tournament at Bethpage in 2009. To date, there’s been over 10 million total rounds played in the Virtual U.S. Open over the years with 28% average annual growth. Pete Harrison, vice president of marketing at WGT Media said current 2014 is tracking at the same growth rate through May.

This year, there are more prizes to win for those who have the video game golf skills to take on the challenging Pinehurst No. 2 course. There’s the Virtual U.S. Open Qualifier, which consists of one unlimited play round through Jun 30. The 250 best scores will move on to the virtual championship. The Championship consists of four single play rounds between July 1 and July 16. These scores will be combined and the leaderboard winner will receive a trip to the 2015 U.S. Open, a trophy and his (or her) name in the official USGA record books.

“This time of year, people come to our game because there’s no other opportunity to compete with the actual governing organization of any sport,” said YuChiang Cheng, co-founder and CEO, WGT. “When you’re playing Madden you’re not playing for the real Super Bowl trophy, but when you’re playing in the Virtual U.S. Open you’re playing on the officially sanctioned course with the USGA keeping records of the video game winners.”

The video game competition is cross-promoted by the USGA with direct links on its websites, and NBC runs announcements during tournament broadcasts directing viewers to the game tournament. Cheng said there’s a big crossover between the television broadcasts and the video game players. Most of the Virtual U.S. Open players are self-described non-gamers between the ages of 40 and 60 with an average household income of $85,000. The tournament offers advertisers a captive audience with an average of 40 minutes per round with hours and hours spent competing.

“This is the largest virtual golf tournament in the world,” said Cheng. “A lot of people come out of the woodwork. They really want to win that trip and get the behind-the-ropes experience and hang out with pro golfers.”

The tournament drives an additional 10% to 20% traffic increase to World Golf Tour, which gets over 2 million unique visitors per month. With 100,000 to 200,000 new players joining each month, Cheng said his site is the largest golf website in the world, bigger than Golf.com and PGA.com. One reason the game is so popular with golf enthusiasts is because of its accuracy. WGT Media sends a full team out to each course in the game to capture every angle – even using helicopters and drones.

“We shoot approximately 300,000 photos and whittle those down to 100,000 photos on the server for our course,” said WGT Media’s Chad Nelson. “We were walking 30 feet into the woods at Pinehurst so we have a photo of where your ball lands. If you get into hazards and you have to play from there, the terrain plays correctly because we utilize aerial and GPS land scans and surveys. With our laser scanners we’re able to get amazing precision on the greens down to millimeter accuracy and on the bunkers down to centimeter accuracy. We also work with the USGA to make sure the fairway speeds and green speeds are accurate based on how close they cut the grass and how firm it is. For example, Pinehurst has inverted plates that are like putting on the top of a dome, our green speeds match the real world.”

Cheng said it’s like creating a time capsule of the way the course was during competition. Since the Men’s and Women’s real-world championships will occur back-to-back, the game will make adjustments so that Virtual U.S. Open players will find a completely different set of challenges when they play in the different competitions. The Men’s and Women’s courses in real life are different. The video game offers a recreational mode for players to see the difference between championship conditions versus regular conditions. Former PGA Tour golfer David Leadbetter has seen pros use the video game as preparation for the real U.S. Open over the past few years.

“It’s a tremendous pre-Open prep to get used to the golf course,” said Leadbetter. “Younger pros are into video games in their free time, and I encourage them all the time to play.”

Beyond the U.S. Open, golf enthusiasts can log on any time to play any of the 18 golf courses featured in the game, including Congressional, Bandon Dunes, Pebble Beach, Harbour Town, Kiawah Island, Oakmont, Royal St. George’s and St Andrews. And for those who want to upgrade from the game to a real-life round, each public course in the game allows players to book room reservations and tee times online and then compete at the actual location. The new iOS version of the game even allows fans to play at the actual resorts (assuming mobile phones are allowed–they’re not at U.S. Open Championships).

Moving forward, Hirshland hopes to expand the Virtual U.S. Open in 2015. Since the USGA is launching two new championships in 4-ball format next year with new things like match play or team competitions, there’s an opportunity to add that to the video game competition, as well.