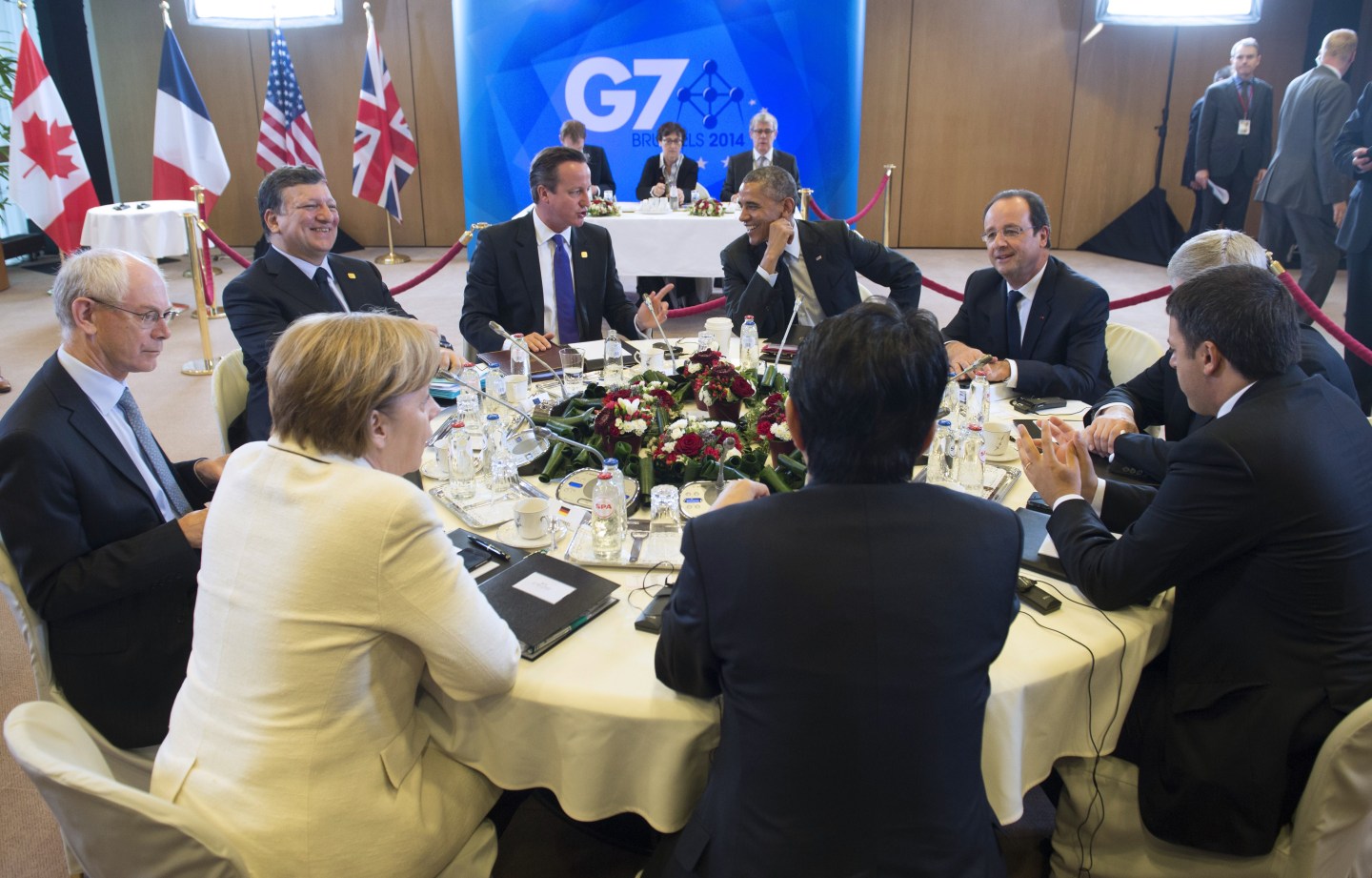 The West’s leading powers threatened Russia with fresh sanctions if it doesn’t stop supporting uprisings in eastern Ukraine, but shied away from new measures for now.

“We stand ready to intensify targeted sanctions and to implement significant additional restrictive measures to impose further costs on Russia should events so require,” The leaders of the G-7 group of industrial powers said in a statement after a meeting in Brussels late Wednesday.

The G-7’s words are a clear signal of its fears that the crisis in Ukraine may escalate further, damaging Europe’s trade with Russia and hitting its weak and uneven recovery from the euro crisis.

The group said it was “united in condemning the Russian Federation’s continuing violation of the sovereignty and territorial integrity of Ukraine,” referring to its “illegal annexation” of the province of Crimea, and its “unacceptable” actions to destabilize eastern Ukraine by supporting armed separatists.

However, they gave no indication of what would trigger further sanctions, and the qualifying adjective “targeted” underlined that there is still no desire to impose broad sanctions on Russia as a whole, but rather, only on individuals and related companies judged to have helped stoke the crisis.

In an interview with French television aired Wednesday, Russian President Vladimir Putin had hit out at the “aggressiveness of U.S. policy over many years” and had claimed that “not a single Russian soldier, not even an instructor” was on Ukrainian territory, flatly contradicting increasingly numerous reports and evidence of Russian citizens and military equipment in eastern Ukraine.

Putin himself has admitted that the “little green men”–the soldiers who overran Crimea in March/April prior to its annexation–were in fact Russian. Men in virtually identical uniforms, studiously stripped of their insignia, were subsequently seen patrolling in a number of eastern Ukrainian towns.

Fighting has intensified this week, with pro-Russian separatists overrunning the regional headquarters of Ukraine’s border guard service in Luhansk after a two-day siege. That will make it far harder for Ukraine to stop even more Russian guns and men flowing in across a long and porous border.

Elsewhere in their statement, the G-7 also sent a more guarded warning to China after a recent dispute with Vietnam over drilling for oil in the South China Sea. The group said it was “deeply concerned” by the rise in tensions, and said, “We oppose any unilateral attempt by any party to assert its territorial or maritime claims through the use of intimidation, coercion or force. ”

The summit continues Thursday, and the leaders are expected to underline their anger by fleshing out plans to reduce Europe’s dependence on energy supplies from Russia. The country currently supplies around a quarter of the EU’s natural gas demand, as well as a large part of its oil, and the fear of losing those supplies has been a factor in Europe’s divided and hesitant response to the Ukraine crisis.

There has been more evidence of divisions within the European camp on how to proceed this week. The Wall Street Journal reported Wednesday that France is going ahead with plans to train Russian seamen in operating the advanced Mistral-class assault ships it is due to deliver to the Russian navy.