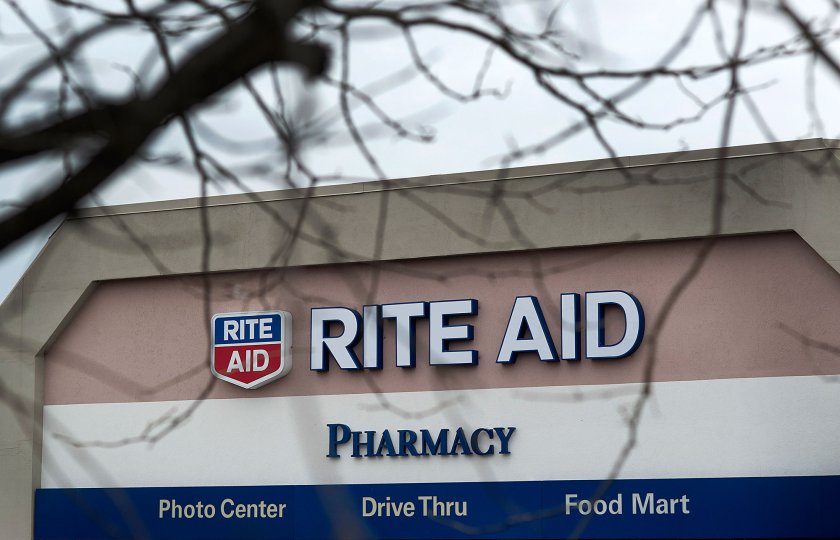 The stocks of these housing giants were left for dead after the housing market crashed. The federal government stepped in with tens of billions in bailout dollars to keep real estate credit flowing during the height of the financial crisis.

The Feds made it clear they intended to wind down Fannie (FNMA) and Freddie (FMCC), and while the housing market remained moribund, nobody took notice. But as the housing market recovered along with Fannie and Freddie’s profits, lawsuits filed by hedge fund investors raised the possibility that owners of the housing giants’ stock might be owed the tens of millions in earnings the companies had been sending to the Treasury in recent quarters.

Signage is displayed outside of a Rite Aid Corp. store in Redondo Beach, California, U.S.

For years, Rite Aid (RAD) was the sick man of the retail pharmacy industry, after a debt-fueled, pre-financial-crisis expansion left the firm unable to cope with the competitive pressures it faced from online retailers like Amazon.com. Rite Aid has since begun to focus on business lines that can’t easily shift to an online environment, like clinic services, and in April 2013, it posted its first quarterly profit in six years.

Rite Aid has doubled down on this strategy, announcing in April that it would acquire the Houston-based RediClinic, the nation’s fourth-largest retail clinic, a move investors think will help the company capitalize on the expansion of health insurance under Obamacare and the primary-care physician shortage in America.

Though Best Buy (BBY) is still weathering the effects of a poor 2013 holiday shopping season, the performance of its stock leading up to that point was nothing short of spectacular. Investors bought into CEO Hubert Joly’s “Renew Blue” turnaround plan, which involves improving the electronics retailer’s e-commerce experience, setting up partnerships with Microsoft and Samsung to create “stores within stores,” and streamlining its overall operations so it can use its retail locations as a distribution network for online sales.

Joly has yet to turn his plan into profits, but even after dismal sales in the final quarter of 2013, the stock is well above its 2012 lows.

Micron is the latest company to be targeted in a wave of deals consolidating the chip-making sector.

With total smartphone sales surpassing 1 billion in 2013, it’s not a bad time to be in the business of manufacturing memory chips for those little computers we’ve got in our pockets. The business is certainly working for Micron technology, which saw sales more than double in the first quarter of 2014 from a year earlier.

Adding fuel to Micron’s growth was its acquisition of Japanese chipmaker Elpida Memory -- which is a main supplier of parts for popular Apple devices like the iPhone and iPad as well as Google’s Nexus products.

Caesars Entertainment was taken private in one of the largest and ill-timed leveraged buyouts in history, and the company has struggled under the weight of the debt used to finance the move along with increased competition as more jurisdictions legalize gambling.

But the firm’s management and private equity backers -- which still own 70% of the company -- have convinced investors that online gambling is the way of the future. And once the federal government gives it the go-ahead, Caesars will be in a prime spot to cash in.

The grocery business is undergoing a slow-moving revolution, as more consumers opt for high-end supermarkets like Whole Foods or choose to purchase goods online or at discount outlets.

Such trends have taken their toll on traditional grocers like Supervalu. The company’s stock fell more than 90% from June 2007 through 2012. But the firm began to turn things around in 2013, as it simplified its sourcing operations and offloaded some of its troubled brands to private equity firm Cerberus. The company rode those initiatives and a generally better economy in 2013 to its highest stock price in more than two years.

Carl Icahn has spent more than 60 years wheeling and dealing on Wall Street, and few of those years have been as fruitful as 2013. His holding company, Icahn Enterprises, placed representatives on the boards of seven different corporations over the course of the year, more than any other year in its history.

Ichan chose his investments wisely, too. Bets on companies like Apple, Netflix, and Chesapeake Energy helped his company deliver a return of more than 150%.

This 150-year-old paper-printing giant has navigated the decline and consolidation of the printing industry deftly, by selling itself as a one-stop shop for large, corporate printing needs and by purchasing smaller rivals.

Though analysts aren’t enthusiastic about the future of the printing industry in a digital world awash with smartphones and tablets, paper printing will continue to be in demand. And if R.R. Donnelly’s stock performance in 2013 is any indication, this firm will continue to dominate that market.

The airline industry has been famously unprofitable ever since its deregulation more than 30 years ago, but a series of mergers over the past decade and a recent decline in fuel prices helped put the industry in the black in 2013.

Leading this smaller pack was Delta Air Lines (DAL), which was able to fill its planes more efficiently than its rivals, dominate the profitable New York market, and earn more dollars per passenger mile than even Southwest. And since Delta had been trading at much lower multiples than its peers, the airline was a big hit with investors in 2013.

Powered by its blockbuster cancer-fighting drug Revlimid, biotechnology firm Celgene’s revenues grew by nearly 20% in 2013. This sort of performance surely pleased investors, but they also have faith that the company will be able to continue to diversify its revenue stream with drugs like chemotherapy treatment Abraxane, which was acquired through Celgene’s 2010 takeover of Abraxis.

The mother of all alternative investment firms killed it in 2013, continuing to find new and creative ways to deploy its massive cache of capital. As Morningstar analyst Stephen Ellis has pointed out, “$102 billion of capital is now allocated to strategies that didn’t exist at the time of its 2007 IPO.”

The firm’s bet on the real estate recovery was a particularly wise and well-timed decision. Blackstone (BX) invested in commercial and single-family residential real estate just as prices in those markets took off. According to the company, real estate revenues soared 107% in 2013, just one reason shareholders cheered the firm last year.

While the music business in general is a shadow of its former self, fans are still flocking to see their favorite acts perform. Live Nation Entertainment, which merged with Ticketmaster in 2010, is in a great position to capitalize on this trend as it owns or controls more than 100 of the most popular music venues in the country and gets a cut of ticketing fees to boot.

In 2013, the firm expanded its interests in artist promotion with the acquisition of U2’s management company, Principle Management, helping the company to further tighten its grip on the live music experience.

Agribusiness giant The Andersons Inc. is well diversified, with business segments in fertilizers, ethanol, grain transportation, lawn care, and even retail. The firm’s ethanol unit in particular benefited from a growing economy, as demand for fuel was strong in 2013. The exceptional performance of The Andersons’ stock in 2013 led management to go through with a three-for-two stock split in December of last year.

Nearly a decade removed from its acquisition of Guidant -- which Fortune labeled the second-worst ever at the time -- Boston Scientific is finally pivoting from the pacemaker and heart-stint driven business it had been pursuing.

These days, investors are eager to get a piece of smaller but growing segments, like Boston Scientific’s Watchman device, which is designed to prevent strokes, or its neuromodulation division, which serves mentally ill patients.

You might be surprised to find a defense contractor on a list of best stock performers in this climate of government austerity, but Huntington Ingalls Industries isn’t just any defense contractor. It is the nation’s only builder of aircraft carriers and one of only two firms that produces nuclear submarines. And even if the U.S. military is purchasing significantly less of these products, it’s still buying what Huntington has to sell.

The shipbuilder is a key provider of destroyers and submarines to the U.S. Navy, which is becoming ever more important as the U.S. military tries to exert its power in an increasingly contentious Pacific Ocean.

TravelCenters -- the largest operator of travel stations along the U.S. highway system -- is in a highly cyclical business. Highway traffic, especially trucking, which makes up the majority of the firm’s revenue, is the lifeblood of the U.S. economy. When the economy is sick, that lifeblood flows much more slowly.

That’s why a brightening economic picture in 2013 (U.S. GDP grew by an average of 3.4% in the second half of 2013 and job growth was the highest since the end of the recession) helped improve TravelCenters’ performance and stock last year.

One of Genworth Financial’s main business lines is mortgage insurance, so you can guess that the recent real estate collapse wasn’t exactly great for their bottom line. The entire industry was nearly wiped out during the worst of the financial crisis, but Genworth persevered, wisely expanding its business overseas to more stable markets like Canada and Australia.

Another main line of Genworth’s business, long-term care insurance, is a risky but growing market, and Genworth pleased investors in 2013 by raising rates and cutting back on some benefits as customers live longer and become more costly to insure.

In 2013, Facebook (FB) proved that it could become the mobile advertising powerhouse it always had the potential to be. Mobile ads now account for over half the company’s $2.5 billion in revenue, and with a user base of 1.27 billion, it’s the place to go for marketers looking to reach consumers on their phones.

Corporations across the Western world shed jobs with abandon following the financial crisis, and they have been slow to rehire, despite the fact that economic conditions have been improving for several years now. Instead of taking on the risk of hiring full-time workers, firms are turning to staffing companies like Manpower to fill their labor needs on a project-by-project basis.

Manpower has an advantage over some of its competitors on account of its truly global scale, offering multinational companies a single source for their staffing needs.

Drug-maker Gilead Sciences was already having a stellar 2013 on the strength of its industry-leading line of HIV and AIDS drugs, but the stock really kicked into high gear after the FDA approved its latest Hepatitis C treatment, Sovaldi, in December.

The drug is particularly valuable to insurance companies, who will pay top dollar for treatments that help patients avoid the ravaging and expensive-to-treat effects of Hepatitis C.