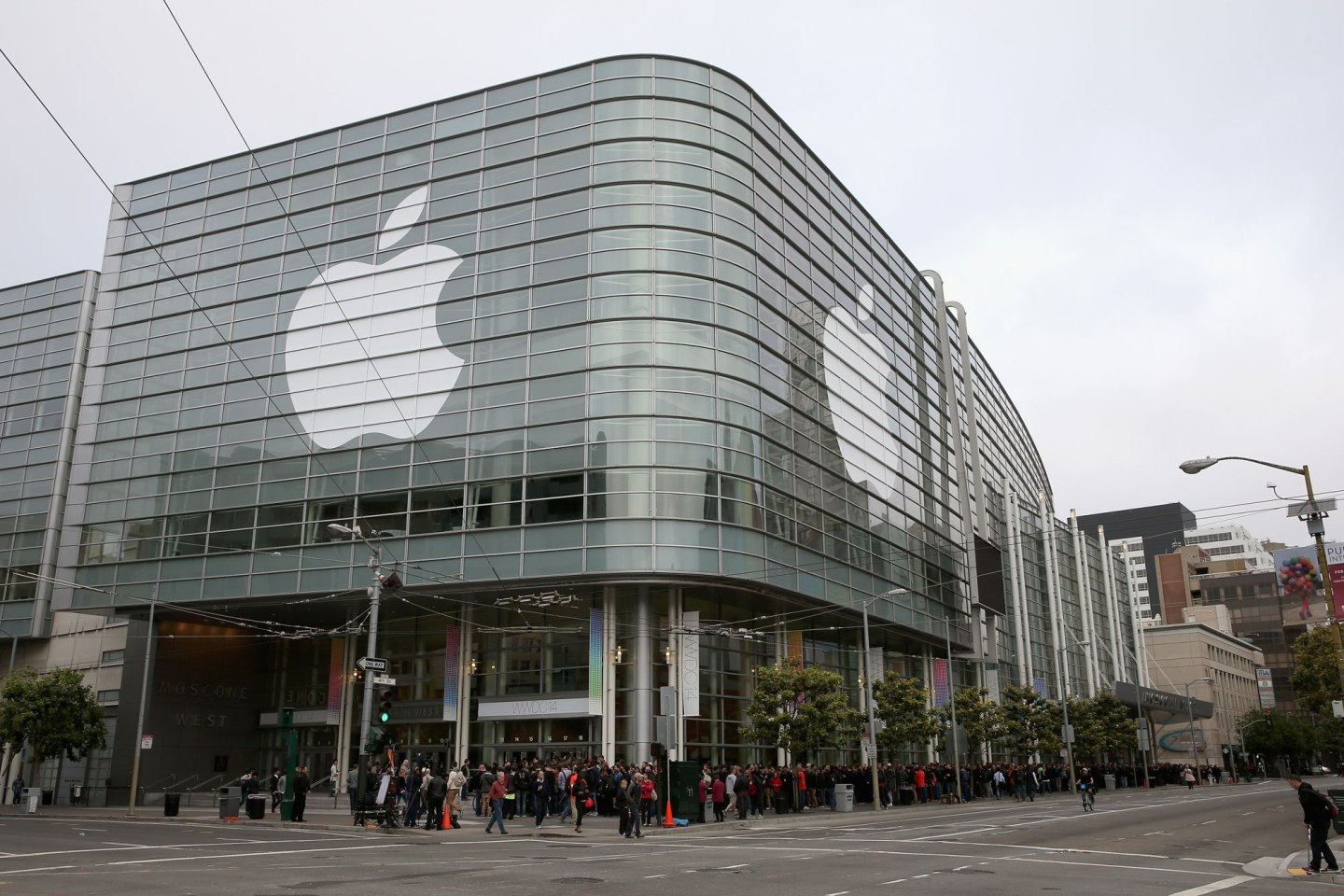 Every year, Apple (AAPL) unveils something brand-spanking-new at its World Wide Developers Conference. But while the tech giant has unveiled some major products and services at past events — the iPhone 4, the MacBook Pro with retina display — it’s raising expectations even higher this time around. After all, Eddy Cue recently boasted that 2014 will see Apple’s “best product pipeline” ever.

Of course, whatever else Apple trots out is anyone’s guess until 10 AM PST / 1 PM EST, when its executives take the stage at San Francisco’s Moscone West convention center. For a blow-by-blow account, tune into this live blog on the all-new Fortune.com, which we’ll update throughout the event. (Just remember to refresh – often.)

12:02: And with that, another WWDC is done. To be sure, it was the most developer-focused WWDC in recent memory. Thanks for joining.

11:59: Cook back to the stage and wraps things up: “Together, they [iOS8 and OS X Yosemite] provide an integrated and continuous experience. You’ve seen how developers … can create powerful apps even faster and more easily than they’ve ever been able to. … We do this so we can create a seamless experience for our users that is unparalleled in the industry. This is something only Apple can do.”

11:53: Federighi emphasizes how useful Swift ought to be, empowering developers to develop simple 2-D games like the one shown to much more complex software projects.

11:50: A demo of just how much easier and faster it is to program a “simple” 2-D game in 5 minutes. (Er, we’ll take your word for it, Apple.) It’s followed by a quick reveal of the finished program.

11:45: Federighi introduces a new programming language called Swift that Federighi says “totally rules.” Developer are going crazy over new features that apparently give it a leg-up over Objective C. (Most of them are going over this blogger’s head.)

11:43: Casual games are getting a lot of love in addition to the high-end console-like titles…

11:43: Now on over to “casual gaming” with SpriteKit. Federighi points out it includes software tools for light sources and other 3-D rendering features.

11:41: Between Metal and CloudKit, this year’s WWDC feels like the most developer-focused Apple conference to date.

11:36: And here comes CloudKit: “A client side programming model” that lets developers take advantage of developers in the cloud.

11:34: HomeKit makes its debut. “There are a lot of home automated devices now… like garage doors and thermostats. … We thought we could bring some rationality to this space.” HomeKit acts as a common network protocol to ensure that only your iPhone opens locks, turns on lights, opens doors and the like. Apple wants to enter your home in a big way. If it works as advertised, HomeKit could change the way many iOS users interact with their home.

11:33: As for Touch ID? Third-party apps can take advantage of that fingerprint technology, too. Federighi reiterates all that user data stays secure.

11:26: Cook invites who he calls “Superman,” or Federighi, back to the stage. Why Superman? Federighi says today’s ongoing event is like an endurance test. (Federighi has had the most stage time.)

11:25: If you’re a developer or beta tester, testing early app builds gets easier thanks to a built in download feature called “TestFlight.” No more work workarounds necessary.

11:24: Now there’s “App Bundles.” Users can buy multiple at a discounted price with just one tap. “I do read your emails!” says Cook.

11:23: Apple is adding an Explore tab to easily browse categories and subcategories on the mobile device.

11:21: Siri gets refreshed with 22 new languages and integration of Shazam to recognize songs.

11:20: iOS really seems to be driving the innovations going into Mac OS.

11:19: More photo editing inside the Photos app, only this time, from the desktop. (That cockapoo pup never looked so vivid.)

11:18: What Federighi hasn’t comment on (yet) is how many photos users can now store via iCloud.

11:14: New features include a search feature, where users can find photos based on factors like location and time. There are also new basic, editing features built right into the app that let users change up light and color without having to switch to a separate mobile app like iPhoto. Any editing changes are automatically updated in iCloud and across devices.

11:13: Photos update…  Remarks colleague Philip Elmer-DeWitt next to me: “Oh, please fix this…”

11:12: With the family sharing feature, you can share the digital iTunes purchase of all your family members. (Think movies and music.) Caveat: Family members have to share the same credit card.

11:09: All-new HealthKit and Health apps helps track and display measurements of your activities — running, blood pressure, among others — and works with third party apps.

11:06: Next up: enterprise. One feature that’s emblematic of their enterprise push is their device enrollment program. There’s also support of third-party document sharing providers and automatic mail replies.

11:04: There’s a lot more hamming it up than in years past. The audience seems to be eating it up.

11:03: Joswiak puckers up for an on-stage duck face selfie. Huge cheers from the audience.

11:01: Greg Joswiak to the stage. Joswiak, like Cook, is donning what quickly seems like the unofficial Apple exec uniform: untucked navy blue dress shirt and jeans.

11:00: Messages is also getting some impressive improvements. Being able to share your location with somebody else should make it a lot easier to find somebody in a crowd. Launching calls of video chats from Messages looks a lot like SnapChat.

11:00: Mobile messaging gets an update with some nice, if much-needed features. Always wanted to take yourself off a message thread with multiple users? Well, now you can.

10:58: The new Quick Type keyboard is context-sensitive. So if someone asks you if you want to grab dinner or see a movie, two of the suggested word shortcuts up to are — yup, you guessed it — “dinner” or a”movie.”

10:57:  An anticipatory hush comes over the audience when Federighi says the iOS keyboard is changing.

10:56: Canned demo of Spotlight search in iOS, which gets much more powerful (and useful) by pulling in results from the web, maps, the App Store, and other sources.

10:54: A single swipe in the mobile Mail app lets users either flag a message or mark it as read.

10:52: iOS 8 takes multitasking to the next level by adding a ton of refinements that allow users to do more simultaneously, for example being able to access the email inbox while composing a message.

10:51: There’s a big push for short-cuts to your most recently contacted folks here. In the multi-tasking part of iOS 8, a “Recents” bar shows people shortcuts with their head shots.

10:50: Cook brings back Federighi to talk about all those new end-user features. On the phone, Apple has refined the notification center. Notification are more interactive. Pull down a text message and reply then and there instead of having to switch over to the Messages app.

10:49: Cook is not pulling any punches in his criticism of Android’s security issues. The audience is eating up the jabs.

10:42: In a cute little nod to last week’s Beats acquisition news, Federighi dials Beats co-founder and rapper Dr. Dre from an iMac onstage. “How you doing? This is Dre.” Huge welcome to Dr. Dre from the audience. “Thanks for creating such amazing apps,” Dre says. “Say, what time should I show up for work?”

10:41: Huge “awwwwws” when Federighi screens a call from his mom.

10:39: When you receive a phone call, you can choose to take that call now on your Mac, regardless of whether your phone is in the other room. Caller ID, included.

10:36: Ohhh, new “Handoff” feature. It lets you swipe up on a document on your iPad, which transfers that work to your desktop so you can go between devices and work uninterrupted. Conversely, a simple flick on your iPad will bring up the same page you were reading on the desktop. Seriously nifty.

10:35: Federighi back to the stage. He wants to talk about that “continuity” feature. Airdrop now works between iOS and the Mac (finally).

10:35: The parallel programming jokes are killing it this morning.

10:33: Demo of the mark-up feature. It’s now really easy to annotate photos with an arrow and add in captions/comments. Don’t know how often folks will actually be doing this, but mark-up looks easy enough.

10:30: Federighi boasts Safari is the fastest browser of them all: up to 6.5x faster JavaScript performance than even Google Chrome, often the leader in speed.

10:29: Hm, potentially cool new HTML video feature for Safari: You can stream Netflix and save battery life by as much as two hours. (So those power-sipping MacBook Airs can go even longer between charges.)

10:29: A tab-view view that gives users a “birds-eye” glance — ho-hum — but more interesting, you can stack similar tabs on top of one another.

10:28: Safari gets an update. Sharing is quicker than ever with one-click sharing to people you share with the most.

10:26: Mark-up feature, where you can say, use the trackpad to write out a digital signature with your finger. The signature can go directly into the email.

10:25: Next up: Mail. They really focused on the basics here: fast-syncing, quick fetches of new mail. They also wanted to address a fundamental issue with email: large documents. Introducing a new kind of technology: Mail Drop. Think of it as Apple’s answer to Dropbox. Attachments can be up to 5 gigabytes in size.

10:24: Up next: iCloud Drive. “Now, iCloud has all of your folders accessible right from Mac Finder. … But even better, you can store all of your own files, organize them however you wish with folders and tags, synced up across ALL of your Macs.”

10:22: Federighi is now showing off how potent Spotlight is. He’s walking us through a hiking example and types in miles into search. Voila! Metrics conversion.

10:19: Overall, the OS X Yosemite UI is much cleaner and looks more closely related to iOS. The translucency of certain elements like the title bars and side bars gives it a dimension that is missing in the current version.

10:17: The new search function looks a LOT more like Google, popping up in the center of the screen and live-populating results from your hard drive and the Web

10:16: The redesigned icons on the doc get a huge response from the audience. “And check out that trash can; that is a gorgeous trash can.”

10:15: They’ve refined the title bar and window constructions. The same translucent materials are used in the sidebars.

10:11: Craig Federighi says “It was a year ago that we narrowly averted an OS X naming crisis,” referring to the transition from big cat code names to places in California. Looking for names, they discarded OS X Oxnard and OS X Weed, eventually landing OS X Yosemite.

10:11: Craig Federighi to the stage. Federighi: “You may remember we were able to deftly shift from names based on big cats to names based on beautiful places in California, starting with OS X Mavericks…” Cue chuckles.

10:07: Cook is shouting out to young developers in the room today, saying the youngest is 13. “We’re going to be seeing apps from these guys for a looooong time,” he says.

10:06: Cook: “We have over a 1,000 of our best and brightest engineers here to talk to you directly in labs how to improve your code.”

10:05: Tim Cook takes the stage in untucked blue dress shirt in jeans. Cook: This conference in 1990 with developers getting together to talk about System 7.

10:02: And we’re here for another WWDC! The lights have dimmed and a video is playing with iOS users advocating for their favorite apps. (One young dude enthusiastically extols the virtues of dating app Tinder.)