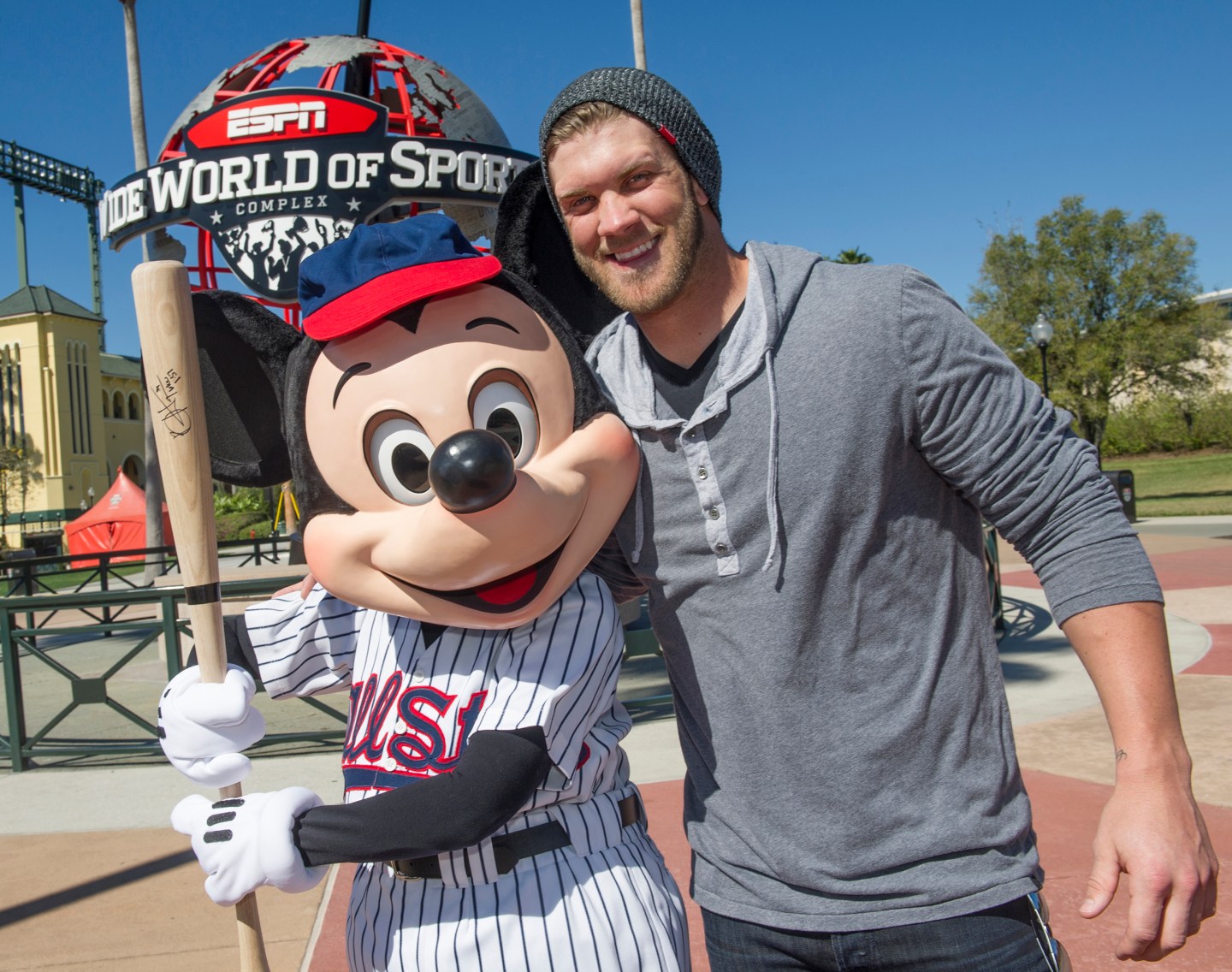 The giant retail chain may top this year's Fortune 500, but it’s hardly No. 1 in the sports world. In fact, considering that Walmart stores sell a wide range of sports equipment, it may surprise you how little the discount behemoth dips its toes into sports. Its biggest play, historically, was in NASCAR; the retailer kicked off a marketing partnership in 2011, called “Race Time,” which allowed NASCAR fans to buy discounted race tickets in Walmart store locations, along with food and drinks.

That program has since ended (though Walmart says “customers can still have a NASCAR experience in race-area stores”), and these days the only official partnership involvement the chain has is sponsoring an LPGA golf tournament (the Walmart NW Arkansas Championship in Rogers, Arkansas) and a fly-fishing circuit (the Walmart FLW Tour) that runs from February to August in places like Alabama, Florida, Texas, and South Carolina.

While almost all the big banks have their own involvement in sports (Bank of America, for example, is the “official bank of baseball”), Citigroup has made a concerted effort to spread the wealth across many different sports with its “featured sports access” program. Through Citi Private Pass, cardholders get to choose from ever-rotating deals on pro camps (Dell and Stephen Curry’s basketball camp, pro laxer Paul Rabil’s lacrosse camp, CC Sabathia’s baseball camp) or discounted tickets to sporting events like the 2014 Crowne Plaza Invitational golf tournament.

This is all in addition to its naming rights on Citi Field, the 2009 replacement to Shea Stadium, where the New York Mets play today. Citigroup also sponsors the Citi Open tennis tournament in Washington, D.C.

The construction-materials retailer, which you may not readily associate with sports, is in its twelfth year as the title sponsor of ESPN’s college football show, ESPN College GameDay Built by Home Depot. Their significant partnership extends to the web and other ESPN college football properties, and ensures that the chain is associated with college athletics’ most lucrative sport.

But the Home Depot also spends money on soccer. It is an official sponsor of the Mexican National Team, and also sponsors five MLS teams, including the New York Red Bulls and the L.A. Galaxy, tied with DC United for the most ever MLS Cup wins.

For 16 years, Home Depot was also a big sponsor of the U.S. Olympic team, but in 2009, due to the downturn, it ended that sponsorship and scaled back its program that employed former Olympic athletes.

Not to be outdone its competitor in the home-building retail biz, Lowe’s also has its hands in the sports realm.

Its main sports of interest are basketball and auto-racing. Lowe’s is a corporate sponsor of the NCAA, and last year announced a partnership with mega sports agency IMG’s IMG College arm to beef up social media targeting college sports fans. But Lowe’s also loves the pros: it is a founding partner of the NBA’s Charlotte Bobcats, a deal borne out of local pride, since the company is headquartered in Mooresville, N.C.

In the NASCAR world, Lowe’s is a major presence: it is the longest-running primary sponsor of the Sprint Cup Series, currently in its 13th season of sponsoring Hendrick Motorsports and the No. 48 Lowe’s Chevrolet driven by Jimmie Johnson, who in 2013 was the series’ top prize-money earner overall.

While Disney-owned ESPN is the “worldwide leader in sports,” covering all levels, The Walt Disney Company itself, through Disney Sports, has focused its sights on amateur athletics, which jibes nicely with the entertainment giant’s family appeal. Every spring, Disney World in suburban Orlando plays hosts men’s and women’s high school and collegiate teams of many varieties (baseball, track, golf, lacrosse, tennis, softball and even rugby) in its ESPN Wide World of Sports Complex— for a fee. More than 400 teams participate each year. And The Mouse wisely layers additional sponsors on top of its services: sports apparel brand Champion is the title sponsor of the ballpark, Champion Stadium, Hess sponsors some of the outdoor fields, HP is title sponsor of the HP Field House, and New Balance sponsors the run Disney race weekends.

That’s not to mention, of course, the various cheer/dance and gymnastics competitions that take place at Disney World every year, like the Presidential Classic, which happens there every year in February during, of course, President’s Weekend. Disney says that between gymnastics, soccer, field hockey, cheerleading and volleyball, more girls compete and train at their complexes than at any other venue in the country.

Any brand can throw some money at a big-name athlete to hawk their product or services. State Farm, however, uses its endorsers in such likeable, clever ways that the company has earned kudos and established itself as a go-to sports sponsor. And all of that has happened relatively suddenly. You could argue it began in 2011 with its “Discount Double Check” ad campaign featuring Green Bay Packers quarterback Aaron Rodgers. The ads were a huge success, and the company continued to shake things up with cameos from Packers teammates like B.J. Raji and Clay Matthews. In 2012 it found similar success with endorser Chris Paul (State Farm has been an NBA sponsor since 2007) and a campaign built around Paul and his fictional twin, Cliff Paul. The brand is winning in the sports marketing game with extra social media elements, like a Cliff Paul Twitter account that has 33,000 followers.

But ads aren’t the only arm of State Farm’s sports strategy. It’s a sponsor of ESPN’s College GameDay Covered by State Farm (not to be confused with the football version of the show, sponsored by Home Depot) and is the title sponsor of State Farm All-Star Saturday Night during NBA All-Star Weekend. Then there are the brick-and-mortar sponsorships: in 2010, the insurance company bought up naming rights to State Farm Arena (formerly Dodge Arena) in Hidalgo, Texas—home to a minor league hockey team and NBA D-League team—and, last year the Bloomington, Illinois-based company signed a $60 million deal to rename the University of Illinois’s Assembly Hall, where its basketball teams play, the State Farm Center.

Is there any big company more readily associated with one sport than MGM and boxing? The two are intertwined in sports history because the MGM Grand Hotel & Casino, located on the Las Vegas strip, is home to nearly every major boxing championship bout. The MGM Grand’s Garden Arena has hosted undefeated WBC welterweight champion Floyd Mayweather Jr.’s last nine fights; the arena, and thus MGM as a brand, has become synonymous with mega fight nights (Mayweather himself is the highest paid athlete on the planet). MGM Grand, which otherwise hosts mostly concerts, is also home to UFC (Ultimate Fighting Championship, a mixed martial arts series) events.

Now MGM Resorts is getting beyond boxing: just last month, the corporation, in a joint venture with Anschutz Entertainment Group, broke ground on a mega, $375 million Vegas arena that will reportedly host boxing, UFC and concerts, just like the Grand, but could also be a lure for pro basketball and pro hockey teams.

Coca-Cola, McDonald's and Nike are three of the biggest brands in the world, and King James has had all three under his belt for years. His Nike relationship began in 2003 with a seven-year, $90-million contract that was promptly extended in 2010. What changed in 2012 was that James finally won the NBA championship. You might think it wouldn't make a difference—even without a ring he was one of the three best players in the NBA and had a big endorsement portfolio—but it means something to brands. Now that James is a champ, new deals came calling. In March (before earning his ring) James got a contract to become "brand ambassador" for Dunkin Donuts and Baskin-Robbins in China, Taiwan, India and South Korea, proving that he is a truly global star a la NBA peer Kobe Bryant. In October, he hooked up with Samsung, a deal that experts say he would not have landed if he hadn't won the title. The Galaxy Note II ads are surprisingly likeable: they show James palling around at the barbershop, using the phone to watch dunk videos and field text messages from Magic Johnson. "In the nature of his spots recently," says Doug Perlman, CEO of Sports Media Advisors, "you can see he's trying to endear himself to a larger fan base that he may have alienated." Indeed, James has perhaps finally ditched the foul memory of his breakup with Cleveland. By adding impressive new deals to his already super lineup, LeBron further established himself in 2012 as an endorser of big global brands. And don't forget his deal with Fenway Sports Management, through which he owns a piece of the Liverpool FC soccer team.

Of course, there’s nothing surprising or secret about the many sports-related marketing efforts, endorsements and sponsorships of McDonald’s. Along with mega consumer brands like Coca-Cola and PepsiCo, it is known to be majorly involved in sports; the Golden Arches are a commonplace sight across all sports. If anything, the only surprising part is that McDonald’s and Coke and other fast food or soft drink brands ever became such big sports sponsors, considering they are not often associated with healthy living, and athletes are the most fit people alive. In recent years, pro athletes have received increasing criticism for endorsing brands associated with unhealthy foods (“McDonald’s the wrong choice for athletes,” reads a 2012 Telegraph headline; a 2014 Globe and Mail headline says, “Olympic athletes urged to cut ties with sponsors like McDonald’s.”) For now, many continue to be associated with the brand.

McDonald’s engages in both types of sports involvement: it has individual athlete endorsers, but also sponsors events and tournaments. It has had official relationships with some of the biggest athletes on the planet, from Larry Bird and Michael Jordan to Olympians like swimmer Ryan Lochte. Today, it is an active sponsor of LeBron James, the reigning endorsement king of the NBA. It has been an official sponsor of the Olympics for 38 years, and in 2012 renewed that sponsorship through 2020. It has put on the McDonald’s All-American Game for high school basketball players since 1978. It’s an official sponsor of the 2014 World Cup. And in 2012, it became the “official restaurant sponsor of the NFL.” These are just a handful of the chain’s many other sponsorships across many other countries, health concerns or not.