Abercrombie stands out by shrinking less than peers 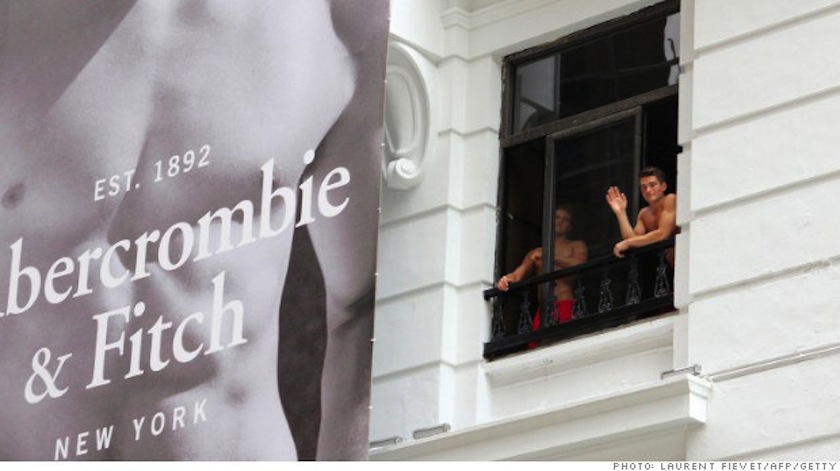 Abercrombie & Fitch Co (ANF) managed to be the star pupil in the teen retailer set with sales that are shrinking much less than those of its beleaguered rivals, helped by a bigger focus on grown-up shoppers at its namesake chain and by updating its fashion.

Despite a wider first-quarter loss—much of it from charges tied to the closure of its Gilly Hicks chain, falling sales and shriveling gross margins—Abercrombie shares were up 4% Thursday morning.

Abercrombie, known for its expensive, logo-adorned gear, and other teen retailers Aeropostale (ARO) and American Eagle Outfitters (AEO) have faced pressure from fast fashion chains like Forever 21 and H&M.

Abercrombie’s companywide comparable sales fell 4% last quarter, with e-commerce saving the day. (Sales at stores open at least a year fell 11%.) But everything is relative: last week, Aeropostale said its quarterly comp sales were down 13%, while at American Eagle, they fell 10% and at Urban Outfitters’ namesake chain, the decline was 12%. (Urban Outfitters also owns Anthropologie.)

Abercrombie has tried to regain its footing by going after more grown-up, affluent shoppers as well as to win back the favor of its finicky young shoppers. At its namesake chain, it is adding larger sizes, making less use of its logos and expanding its variety of shorts styles. At Hollister, its biggest business by far, the company is making stores brighter and playing music less loudly, and lowering prices.

At A&F, the efforts seem to be working- that chain’s comparable sales fell 1% helping the overall company report better than expected sales and a smaller than expected loss.

But Hollister still has a long way to go, with comp sales down 7%. And overall company gross margin shrank a huge 3.7 percentage points to 62.2% of sales because of higher promotions.

“In what remains a difficult teen retail environment, we are pleased that earnings for the quarter were in line with our expectations,” Chief Executive Mike Jeffries said. The chain, long time a Wall Street favorite for its decades of growth, recently cut the longtime CEO’s pay and stripped him of the chairmanship. Abercrombie also created a new chief operating officer role and named four new independent directors to the board as part of a deal to placate activist investor Engaged Capital LLC.

For the quarter ended May 3, Abercrombie reported a net loss of $23.7 million, or 32 cents a share, compared with a prior-year loss of $7.2 million, or 9 cents a share. Excluding charges related to the closure of Gilly Hicks stores and other items, the adjusted loss in the latest period totaled 17 cents a share. Net sales slid 1.9% to $822.4 million. Analysts surveyed by Bloomberg had expected a 19 cent loss on $796 million in revenue.

Abercrombie said it substantially completed the Gilly Hicks store closures as planned by the end of the quarter. The company has so far incurred $87.1 million in pretax charges related to the closure of the 24 Gilly Hicks stores, which sold intimate apparel. That line will continue to be sold at Hollister stores.