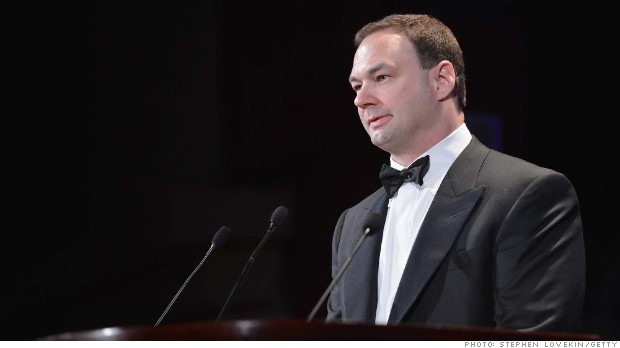 attends the The Jackie Robinson Foundation Annual Awards' Dinner at the Waldorf Astoria Hotel on March 4, 2013 in New York City.

FORTUNE — Legendary Pictures and distributor Warner Bros. have seen Godzilla stomp through box office records. The film has grossed more than $203.8 million worldwide, crossing the $100 million mark domestically in just four and a half days. Its $93.1 million opening weekend was a surprise to many analysts, but not to Legendary Pictures CEO Thomas Tull.

“There’s more information available today than has ever been available in terms of people putting their preferences and all kinds of information freely up online,” said Tull. “We want to take advantage of that and be much more efficient about the way we run our business.” Tull sought inspiration from the sports business and its use of applied analytics. “I’ve had a front row seat to a number of things, and I was frankly frustrated in the way in which we deploy capital for advertising films.”

Tull assembled a dream team for his Applied Analytics Group, which began with the acquisition of software company StratBridge and founder Matt Marolda and his team. Marolda spent the past 18 months recruiting top minds from the world of analytics, dynamic pricing and the sports industry. The team includes a Harvard astrophysicist who did his Ph.D. on very complex systems, as well as experts who designed dynamic pricing for the airline industry. Tull said the goal was to take people that were used to taking very large data sets and apply that knowledge to have a real yield to real world problems.

MORE: How a scrappy young startup plans to turn the massive database market on its ear

Eddington, which is named after 20th-century British astrophysicist Arthur Stanley Eddington, was used for the first time with Godzilla and will now be part of the marketing process for all future Legendary projects. Tull pointed out that the technology is being deployed specifically for marketing and has nothing to do with the creative process. Godzilla director Gareth Edwards was not given any directives to follow the data.

“We put together a massive database and a proprietary software system that helps us think about trends and target multiple quadrants,” said Tull, who believes Hollywood four-quadrant system is antiquated in today’s world. “For example, we were able to see that females from 24 to 35 were persuadable, meaning they were open-minded about being convinced to see the film.” Tull says this process is about efficiency. “If you’re not interested at all in our movie or our television show, we don’t want to bombard you. We want to do just the opposite. So we were able to focus on people that were persuadable and that were open-minded about Godzilla and then supply the right materials and messaging to get them excited about it.”

Perhaps most important to Hollywood, where every dollar matters, this technology actually saved Legendary Pictures millions and millions of dollars in marketing.

“We spent substantially less marketing dollars than we had done in the past and we beat the tracking by almost $30 million domestically on opening weekend,” said Tull.

While the rest of Hollywood spends tens of millions of dollars to market movies to just four types of people — younger men, younger females, older males, older females – Legendary Pictures now breaks down many multiples of audience types and can even target groups geographically. Tull said his group, analyzes how people make decisions. The results are then applied in a more targeted manner than was ever possible before. And the process is designed for the long haul, not just opening weekend.

“This was our first big foray, and that’s something that we’re taking a look at and in terms of how we spend money and where we spend money going forward in what we call the ‘chase’ campaign,” said Tull. “If we can change things on the marketing spend in that 10%-to-15% area, that’s a different business. It’s hard and it took us quite a while to put this together, but I’m cautiously optimistic about what it means.”

Tull believes this process will work even better for films that aren’t reboots of franchises, Like Legendary’s upcoming thriller, As Above, So Below. The studio’s first micro-budget film, which is set in the catacombs underneath Paris, will be put to the test this summer.

“It may be even more efficient for things like [As Above, So Below], where you have to be extraordinarily thoughtful and targeted,” said Tull. “This is something that we’re committed to because I feel very strongly that simply staying the course and not changing the way that our capital is deployed on advertising is irresponsible.”

While Godzilla has grabbed headlines for its record-breaking opening, the ramifications of its box office destruction could reverberate for years to come thanks to Legendary’s new approach to targeting movie goers.