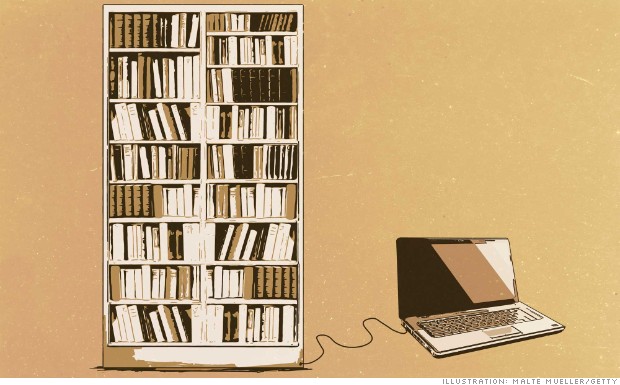 FORTUNE — When two startups, called Oyster and Scribd, launched platforms last Fall, they were each hailed as “Netflix for books.” Like Netflix (NFLX) or Spotify, their platforms offer users unlimited consumption of digital media, in this case, books, for a monthly fee.

The services were each well-received by media and subscribers. Oyster would not reveal its subscriber numbers, but Scribd boasts 5 million mobile app installs and claims 80 million monthly users (which is not the same as paying subscribers).

That comes as no surprise: Netflix and Spotify, which have a respective 35 million and ten million subscribers, have primed consumers for paying a monthly fee to rent digital content. It’s the “access over ownership” trend, where consumers prefer to pay to stream content via the web, rather than buy the content outright. The only problem with applying the access model to books, like Oyster and Scribd, is that publishers have been slow to go digital. They’ve been forced by Amazon to lower prices and to sell e-books, but they weren’t eager to jump on board with digital access-based platforms like Oyster or Scribd.

Oyster had to work for a year to get one of the “Big Five” publishers on board for its launch. To do so, the company had to show publishers that it wouldn’t cannibalize their existing sales. When Oyster opened its doors, it had 100,000 titles available. But it couldn’t have launched without the support of top publisher HarperCollins, says CEO Eric Stromberg. Now Oyster has 500,000 titles. Likewise, Scribd has a inked deal with HarperCollins and offers 400,000 books.

The publishing world’s early adopters saw that platforms like Oyster and Scribd could bring a new audience to their books. Beyond that, Stromberg says Oyster’s early growth and engagement showed publishers that a partnership could sell or get reach for lesser known books in the publisher’s repertoire. The distribution of books read across each publisher extends to 95% of their catalogs, including backlisted titles, Stromberg says.

Today, Oyster and Scribd add Simon & Schuster, one of the country’s top five publishers, to their platforms. The deal adds an unspecified number of Simon & Schuster backlist books to each of their libraries. Stromberg called the deal a “game-changer,” saying it “represents a tipping point” for major publishers in their adoption of digital. Trip Adler, CEO of Scribd, noted that subscription books was a completely new concept two years ago, but at this point, the publishers “are very eager to join … as more and more readers adopt the subscription model and it becomes a more common and mainstream way to read.”

The startups did not work together on securing the deal, but Simon & Schuster’s decision to join both at once highlights how competitive the market is. A Simon & Schuster representative said the company took its time before going digital because it needed to be comfortable that its authors would be compensated properly, and that the company “would be able to preserve the highest level of sales of our new books.”

Still, it’s worth noting that the two startups have very different backstories: Scribd began in 2007 as a place to publish academic papers, evolving into a media reader tool for media companies. The company raised $25.8 million over the years (the latest of which was raised in 2011). In October 2013, Scribd launched its digital book subscription service.

Meanwhile, Oyster was formed in 2012 as a subscription book service. The company has raised $17 million in venture funding.