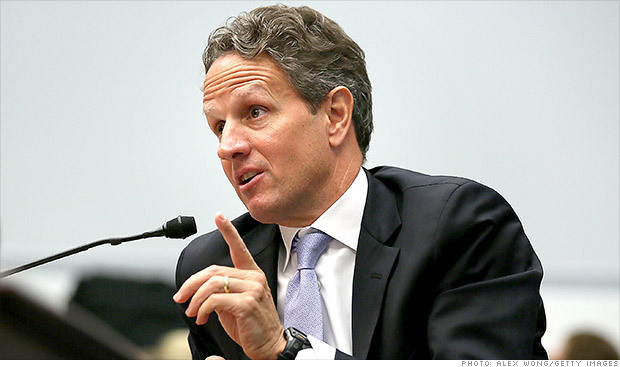 FORTUNE — In his new book, Stress Test, former Treasury Secretary Tim Geithner says nice things about me, kind of. For the most part, he fairly recounts our disagreements during the 2008 financial crisis and its aftermath. If you share my skepticism of the bailouts and their generosity, you will think well of the positions I took. If you share his world view that we were justified in throwing trillions at the big banks to “save the system,” you will not. Wherever readers come out, Tim’s book has reinvigorated a much-needed debate about whether our financial system should be based on a paradigm of bailouts or on one of accountability.

Though the vast majority of Americans favor the latter, Washington’s love affair with big finance continues. Regulators and politicians may spout a good line about ending “too big to fail,” but their actions speak louder than their talking points.  Financial reform has been tepid. The hard work to force mega-banks to raise more capital, replace their unstable short-term funding with long-term debt, and simplify their legal structures is at best, half-done.

But who can blame the regulators for being timid when members of both parties in Congress seem to value campaign contributions over system stability? Indeed, as I write this, the House is planning a hit-job hearing against Treasury’s Office of Financial Research (OFR) for daring to raise questions about risks posed by large asset managers. This is reminiscent of the intimidation tactics used by the derivatives industry more than a decade ago to beat back Brooksley Born when, as Chair of Commodity Futures Trading Commission, she suggested that derivatives markets needed oversight.

MORE: The bigger beef between Tim Geithner and his critics

At least Tim is honest about his acceptance of mega-banks and his disinterest in ending too-big-to-fail. But what’s troubling is his failure to acknowledge the inherent instability created when Wall Street thinks it has a giant put on Uncle Sam. He accepts the risks of moral hazard when it comes to bailing out homeowners, but not the mega-banks. He almost naively assumes that the titans of Wall Street can somehow rise above the temptation to take outsized risks when they know the government will always be there to bail them out. Yet, when it comes to homeowners, Tim worries about the moral hazard government relief efforts create. Indeed, he justifies his limited efforts to help homeowners, in part, by saying that he didn’t want to reward the behavior of those who knowingly got in over their heads.

I agree with Tim that there will always be financial cycles and a need for government interventions. But the point of those interventions should be to stabilize the system for those in the real economy who rely on banks for payment processing and credit — the depositors and borrowers. The goal should not be to bail out those who manage banks and invest in them — and caused the problem in the first place. Tim’s justification of the bailouts is based on a false dilemma: that our only choices were either to do nothing or to pursue the over-the-top measures which we did.

To be sure, the risk of bank runs is real in a financial panic. If an institution has trouble funding itself, that can have a severe impact on its ability to keep lending. But only a financial institution’s short-term borrowing “run.” These include uninsured deposits, and sources such as repos and commercial paper that need to be continuously renewed. Long-term debt and equity can’t “run” — those investors are stuck and should bear the risks of their investment decisions. There is little reason to bail them out if stabilizing the system is the goal. Similarly, you don’t need to protect the jobs and bonuses of dunderheads at places like AIG (AIG) and Citi (C) who got their institutions into trouble. Indeed, markets generally look favorably at replacing bad management and withholding bonuses from people who caused losses for the companies where they worked.

On his book tour, to explain the need for bailouts, Tim has used a clever analogy of a pilot trying to land a plane that is on fire and in the back, sit the terrorists who started it. He argues that the pilot can’t leave the cockpit to put them in handcuffs. He first has to land the plane. The problem with this analogy is that the plane landed at the end of 2008. And let’s face it, instead of handcuffing the terrorists, we escorted them to the executive lounge.

The reality is that by 2009, the financial system had stabilized. For better or worse, trillions in government support had been provided, including $700 billion in TARP funds. At that point, there was no excuse not to require Citi to restructure and downsize, to force banks to shed their bad assets, to require wide-scale restructurings of troubled mortgages, and yes, to put a few people in jail. This has nothing to do with vengeance. It’s just good economics. If people aren’t held accountable for their behavior, they will commit the same offenses. If banks don’t clean up their balance sheets, they won’t go out and lend. People in over their heads on mortgage debt cut back on other spending. Millions of underwater mortgages impede labor force mobility and create “shadow inventory” which prevents the market from clearing.

Tim, however, discounts bailout criticisms as Old Testament justice. He doesn’t buy the counter-economic arguments, and on that, we will never agree. But unlike some college students these days and their attitudes toward commencement speakers, I don’t mind listening to people whose views differ from mine. So I recommend his book. It is well-written and full of revealing personal anecdotes. Tim’s charm and wit come across, page after page.  He tells of one story when he was out boating off Cape Cod and saw a couple whose sailboat had capsized.  They were hanging on to the hull for dear life. He swam over to them and convinced them to swim to his boat, only to discover that they were weak swimmers and couldn’t handle the current. Fortunately, they made it back to their boat and were eventually rescued. Tim wryly characterizes this as an early lesson in crisis decision-making. (It might also suggest an early propensity to bail out people when they really should be left to their own resources.)

MORE: Wall Street and Washington can’t agree on whether they agree

While an enjoyable read, Tim’s book is also a warning. As much as he is trying to justify the decisions he made and actions he took during the crisis, I sense he is also trying to prep the public for future bailouts. And with this message, I fear, he is reflecting the unspoken views of many on Wall Street where he is now employed: The system is still unstable, there will be another crisis, and yes, they will need to be bailed out again. Of course, Wall Street titans would like bailouts to be new paradigm — after all, they are so much easier than trying to reform the system and hey, they made money last time!

The problem is, when Wall Street blows up, the rest of us suffer.  The cash profits from the bank bailouts are poor recompense for the millions who lost their homes and their jobs, to say nothing of taxpayers and the huge risks the government took with their money. For these things, the public will never be adequately compensated.

I guess I would feel better about Tim’s rationalizations of the bailouts if I thought he was more committed to avoiding them in the future. But instead of openly and vigorously advocating for meaningful financial reform, he seems to think we have pretty much done all we can or should do. I think we should apologize for the bailouts. He wants to be thanked for them. But if we glorify regulators when they bail out the industry, while savaging them when they try to regulate it, what kind of system will we have?

Sheila Bair was Chairman of the Federal Deposit Insurance Corporation from 2006-2011 and is the author of the New York Times best-seller, Bull by the Horns: Fighting to Save Main Street from Wall Street and Wall Street from Itself.