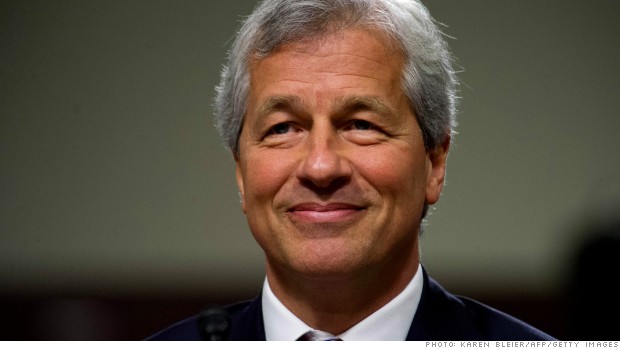 FORTUNE — Jamie Dimon is in for the long haul at J.P. Morgan Chase.

The CEO of the largest U.S. bank recently told a group of shareholders he wants to stay on at J.P Morgan for as many as five more years, according to a report in The Wall Street Journal.

“I’m going nowhere,” Dimon reportedly told attendees at a April 23 event in Boston, adding that the bank’s board has the final say over the length of his tenure.

Dimon has served as CEO of the largest U.S. bank for the past eight years. Adding another five years would rank his tenure among those of the longest-serving Wall Street CEOs, joining the likes of Dick Fuld, who ran Lehman Brothers for almost 14 years until the firm collapsed in 2008, and Jimmy Cayne, who ran Bear Sterns for nearly 15 years. Cayne also ended his run in 2008 in the midst of the subprime meltdown.

Dimon’s latest revelation reverses his tone from a year ago when he hinted he would leave the bank if shareholders decide to separate his roles of chairman and chief executive.

Dimon has spent the past year actively meeting with investors and activist groups, which seems to have paid off. This year’s annual shareholder meeting on Tuesday is expected to be significantly quieter than last year, and for the first time in five years there will be no vote on whether Dimon’s dual role should be split.

The muted tone among shareholders comes in the wake of a rough year for Dimon, who faced a series of regulatory challenges at the bank that ended in $20 billion worth of fines. Earnings also disappointed this past quarter: J.P. Morgan reported an 8% drop in revenue from the year prior.

A J.P. Morgan spokesperson was not immediately available for comment.