Big banks are riskier than ever, says FDIC vice chair 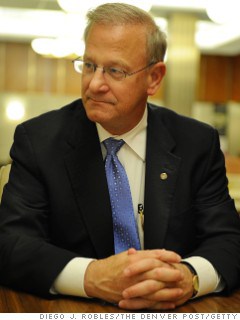 FORTUNE — It has been six years since excessive risk taking at the largest banks catapulted the globe into one of the biggest recessions in modern history. And in many ways, the U.S. has not fully incorporated the lessons of that economic crisis.

I spoke with Tom Hoenig, vice chair of the FDIC and former president of the Federal Reserve Bank of Kansas City, Mo., on May 14 about the ongoing dangers within the financial system and what regulators and others should be doing to turn the tide. Below is an edited transcript of our conversation.

Eleanor Bloxham: We met four years ago when we both spoke at a banking conference in Charleston. Things were rocky then, and it is clear that today the biggest U.S. banks are still very risky. Which of the risky behaviors at the biggest banks today scares you most?

Tom Hoenig: Here’s how I would describe it. These institutions at the time of the crisis were highly leveraged. They were engaged in derivatives transactions and selling collateralized debt obligations (CDO). The crisis occurred, and they required government assistance.

Today, people argue these large banks are better capitalized — and they are — but they are still highly leveraged, and there’s still a tremendous amount of derivatives activity. The notional value of derivatives is higher today than at the time of the crisis. Some changes have occurred, but banks have been resistant to reform in the area of collateralized loan obligations (CLOs) and been heavily involved in leveraged lending, which is risky.

If we were to have a decline in the economy, taxpayers could still be exposed to the need for government intervention. It’s a concern I have and the public should have as well.

What has the FDIC done, so far, to ameliorate the risks for depositors and the economy?

We have taken some steps. We have raised leverage ratios for banks from 3% to 5% for bank holding companies and 6% for the banks, requiring them to hold more capital. The Volcker Rule, which restricts banks’ trading, has been implemented. That’s a positive — and we now have to be conscientious about implementing it.

But it’s not enough. I’m most concerned in Dodd-Frank with the Title 1 and Title 2 provisions. Title 1 primarily means banks would be resolvable under chapter 11 bankruptcy. We still have a lot of work to do to make that happen. Title 2 relies on the government as a backstop. It’s a form of bailout. We need to move away from government intervention that creates moral hazard. Being able to use Title 1 would be a huge factor in making the banking industry safer. [On May 7, Hoenig discussed the importance of the banks’ living wills in accomplishing this.]

Pay programs at the largest banks still encourage risk taking. The FDIC put out an advanced notice over four years ago asking for comments on proposing a rule that would charge banks more for depository insurance if their pay programs were risky. What are the FDIC’s plans to act on this proposal?

MORE: Advice for the underemployed class of 2014

I’d say this: If the banks knew they could have a true bankruptcy, their pay programs would become less of an issue. If I think I will be bailed out, I’m more likely to pay for volume increases without quality controls in place. It is very important to make the banks bankruptcy-compliant, and we’ve moved slowly on that.

In a speech in Boston in early May, you discussed the “too big to fail” subsidies that the largest financial firms receive from the government. Can you describe in plain English how these subsidies for banks work and how they help big banks get bigger and more systemically important?

I’ll try. If I lend you money and I know you’ll fail and lose money, I’ll be careful about lending to you and charge you more for being risky. But if I am convinced you won’t fail, that you’ll be bailed out, I’ll be willing to lend you money with a lower charge for risk. It lowers your cost of capital. Someone else who doesn’t have that advantage will pay more for capital.

A recent article in the Financial Times refers to an Oliver Wyman study that suggests the biggest banks don’t receive such subsidies. What are your thoughts on that?

I question it. As I understand it, it [the study] was sponsored by the [financial services] industry. On our website, we have numerous studies on “too big to fail” subsidies. These studies come from academics, from the IMF, and the OECD, and they systematically show big banks do receive subsidies. The findings stand in contrast to what you’ll find in the commissioned studies.

What more could the FDIC be doing to address the risks in big banks?

We are using risk-based pricing now for depository insurance. A broader issue — and this applies to the FDIC and other regulators — relates to bank examinations. When we examine a regional or a small bank, we do a full-scope exam. We look at the whole bank and make a judgment about the overall condition of the bank.

In contrast, the largest banks have embedded examiners that look at information that management provides to them. It’s not the same as a full-scope exam. We should be providing a more intense exam of the largest banks and look at their credit and investment portfolios using statistical techniques to get a deeper understanding of the bank’s risks. Then you can do a stress test that is more targeted.

Do you think lack of prosecutions by the Justice Department and the SEC have sent the wrong signals to bankers?

I’m not sure about your premise. There’s been a lot of activity there. I don’t have a judgment on that.

What more could legislators be doing to protect the U.S. and global economies from another great recession?

I do think there is more that could be done. My colleague and I wrote a paper on it. If you could … separate out commercial banks from those doing broker dealer, trading activities, I think that would add to safety and soundness.

Also, we need to reform the repo markets and reverse the 2005 bankruptcy act that allowed mismatched funding of low-quality, long-term assets with short-term liabilities.

And we also need to reform money market [accounts]. They get treated like deposit [accounts] but they are investments. They need to be marked to market and have floating NAVs [net asset values].

Regarding capital adequacy [of banks’ balance sheets]? There is legislation pending for higher [capital] ratios. This is also something regulators can do if they choose to.

Eleanor Bloxham is CEO of The Value Alliance and Corporate Governance Alliance (thevaluealliance.com), a board education and advisory firm.