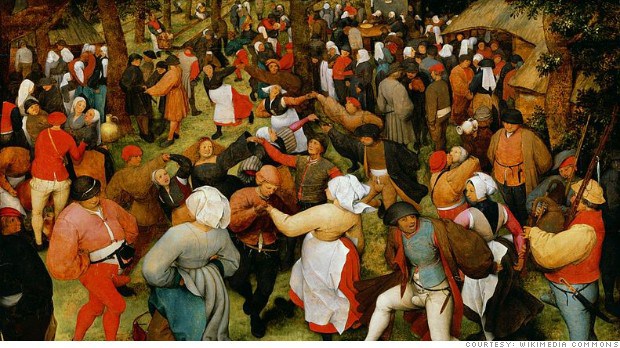 The bankruptcy engulfing the city of Detroit has raised the tricky issue of whether illustrious, city-owned works of art housed at the Detroit Institute of Art can be sold to satisfy creditors’ claims.

The city’s emergency manager, Kevyn Orr, hired the auction house Christie’s to evaluate those pieces clearly owned by Detroit, which comprise 2,781 of a total of 66,000 pieces, about 5%, and include such masterpieces as The Wedding Dance by Pieter Bruegel the Elder.

Christie’s has filed an appraisal of  $454 million to $867 million for the city’s art. The amount doesn’t come close to closing the gap on $18 billion of city debt, but it could be significant for pensioners and others who are likely to get much less than they’re owed in an eventual settlement.

Of the pieces owned by Detroit, a mere 11 account for roughly three-quarters of the value. The Bruegel alone should fetch between $100 million and $200 million. Other famous paintings include van Gogh’s Self Portrait with Straw Hat, which could be worth up to $150 million, Rembrandt’s The Visitation, worth as much as $90 million, and Matisse’s Le guéridon, as much as $80 million.

Patrons of the museum, which is a private, non-profit institution, have been opposed to a liquidation of the pieces owned by the city. The museum has said the art shouldn’t be sold, because it is being held in trust for the public. Opposition, however, may get trumped by the bankruptcy court.

City workers and retirees entitled to pensions have been quoted complaining that housing, food, and medical expenses could overwhelm them if their benefits are cut drastically. Putting aside the legal question, can you make a moral case that a bankruptcy settlement should spare art while slashing the incomes of retired public employees?

Christie’s, law firms, and foundations are exploring possible methods of “monetizing” the city’s artworks, while keeping them at least part of the time in the museum’s collection. Under these methods, foundations or wealthy individuals could buy the art, place them in trust, and then agree to exhibit them at the Detroit Institute of Art.

Gov. Rick Snyder of Michigan is reported to have told the Detroit News editorial board on Thursday that the state might be willing to participate in a transaction to save city art for the benefit of the museum as part of an overall agreement to bring the city’s entire bankruptcy proceeding to a swift settlement.

U.S. District Court Judge Gerald Rosen agreed to mediate a deal for the art, given the number and complexity of the financial negotiations surrounding the city’s bankruptcy. Two weeks ago, Paul Schaap, a biotech entrepreneur and philanthropist, said he would be discussing with Rosen a $5 million contribution to any fund designed to save the city’s art for Detroit.

Having to bid farewell to art in which Detroiters have taken pride would be a blow — as would any settlement that hurts pensioners who have no way to replace lost income. Years of political bickering and standoffs in the city have brought this financial reckoning.

Gov. Snyder acknowledged the painful alternatives when he said earlier this month that he was  “encouraged by people coming together to try and find creative solutions to very difficult problems — that culture of collaboration should be everyone’s goal throughout bankruptcy and beyond.”

Cities and states across the nation with weak balance sheets that own valuable assets might consider Detroit’s predicament by making hard choices sooner rather than later.